Steffen Peters Logged a Perfect FEI Record in 2020. Here’s How He Did It.

Home > Blog > Dressage > Steffen Peters Logged a Perfect FEI Record in 2020. Here’s How He Did It. 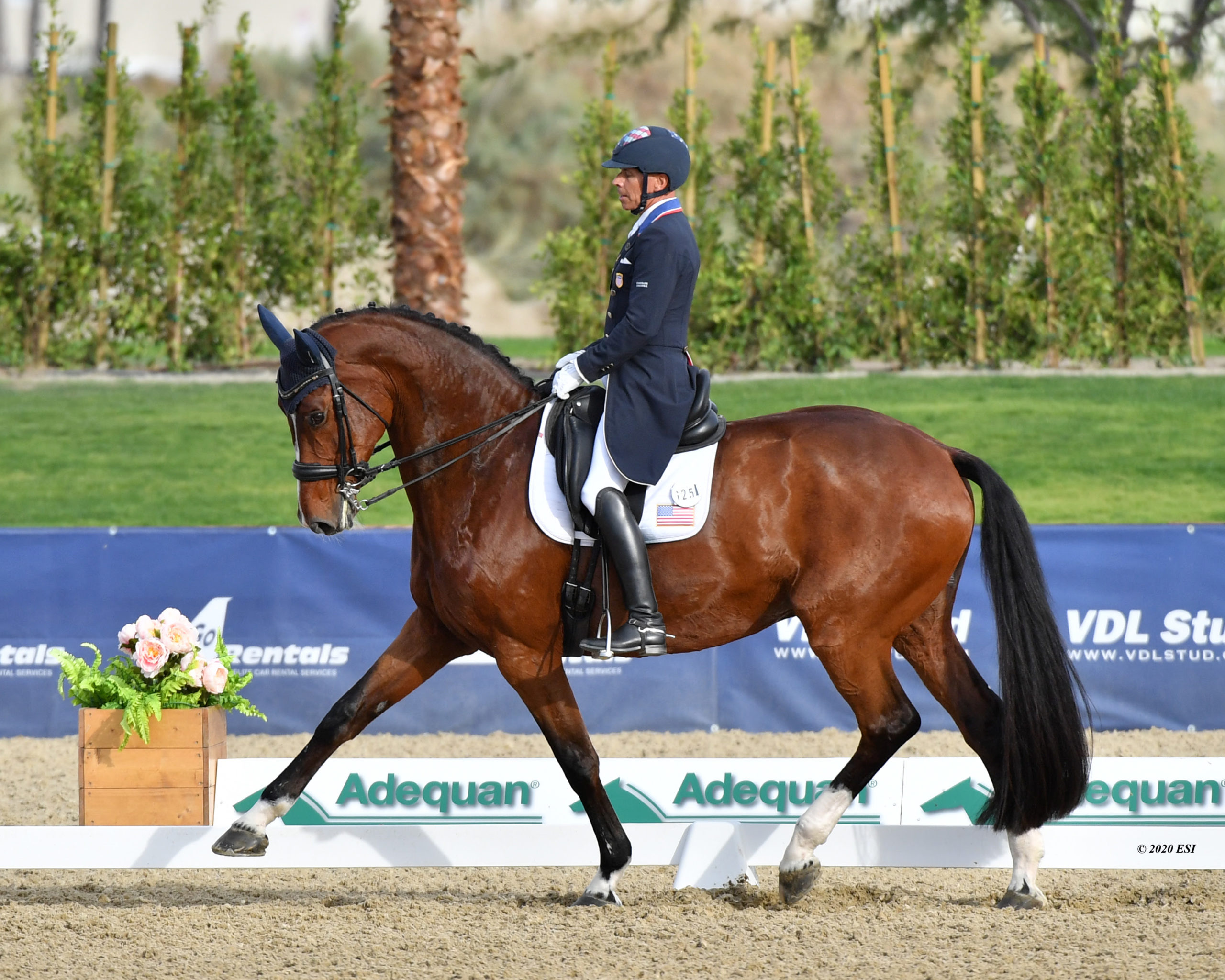 The year 2020 has offered no shortage of things to complain about. Unless, that is, you’re Steffen Peters.

The American Olympian posted a perfect season in 2020, winning all 16 of his FEI starts with Suppenkasper and closing the season with a personal best in the Grand Prix Special.

“I get so emotional about this horse. I have never ridden a horse that wants to do so much,” said Peters.

“He is a puppy dog; the second you get off him, he follows you everywhere. When I get off at home, I take the bridle off and he walks behind me. We have a grass paddock and he stays there for a moment, doesn’t think about running away and when I call him, he comes to me. At 9 o’clock at night, he gets his cookies and calls me from a hundred feet away. He is one of those dream horses.”

The pair’s spectacular season started in Wellington, FL. Steffens and the 12-year-old Dutch Warmblood gelding dominated the all four 3* weeks, swept the World Cup and Nations Cup weeks, and collected a pair of 5* victories at the Adequan Global Dressage Festival. After a brief COVID-mandated break, they closed the season winning all four of the Grand Prix CDI3* events at Desert International Horse Park in California and earning a personal best of 77.340% in the Grand Prix Special.

With Tokyo 2020 delayed by a year, it might seem like Peters and “Mopsy” are peaking too soon. He says the best is yet to come.

“We made the team for the Olympic Games that didn’t happen,” said Peters. “But I felt like Mopsy and I needed at least another year to mature—not just Mopsy, myself too. I can’t help but think we’ll be in even better shape next year.”

Judging by his winning ride interviews at Desert International Horse Park this past month, he’s has been making the most of that time. Here’s the blueprint to Peters training and mental game.

“I practiced [the piaffe] in the two point”

“Mopsy is an extremely energetic horse. Sometimes too energetic and that shows in the extended trot and canter. But it also shows in the piaffe and passage.

“He’d go so excited in the passage, then what used to happen is he’d get a little uneven behind. One leg would do a nine and the other one for a six. The piaffe was still a little difficult, when he tried so hard he was sometimes swaying in front. I practiced that quite a bit in the two point at the end of our warm up to just make sure that he understands that the piaffe is part of relaxation.

“He finally understands. Before I was always saying a little prayer and being super careful not touching him and hoping things work out in the piaffe. Now I can ride it and be little more in control of it.”

“Every single day that standard, that expectation and remember that comes from the daily work. You don’t do necessarily all the movements of the grand prix but if you do a movement you do it as if you’re riding at the Olympic Games. Either you do it 100% or you don’t do the movement.

“So, for instance, we have days where we don’t do the extended trot. That’s working. That’s very stressful on the horse. We don’t do a lot of pirouettes where the horse carries so much weight on one hind leg. I do those once or twice a week. I don’t do the half passes every week.

“You work on the whole idea that the Grand Prix is based on because you need at one point so much energy but on the flip side this extreme relaxation…so constantly at home working on getting them confidently energetic but more important relaxed.”

“With Mopsy, sometimes I don’t do anything.”

“I just let him sit there…just watching the tests in the shade.

“I appreciate every single day the fact that they just do it.”

“I still appreciate every single time when I have him on a loose rein and he’s stretching and he’s turning exactly the way I want him to. I never forget how incredible that actually is. That a horse can listen to such sensitive light aids with light quiet communication.

“I think that’s what I base my philosophy on in dressage that you can really talk very quietly and whisper to a horse. Maybe sometimes you say something a bit louder to make your point but you always come back to that lighter quieter aid and see if that works. Mopsy lets me ride that way and he makes me look good.”

“At the end of the day, it is so important what we tell ourselves”

“When things go well, it is still just like that first time when you win a major championship. On the flip side, I had to learn when things don’t go so well, to react to it, you’re only human, but the biggest question in the entire universe is when something goes wrong, how long do we react to that?

“The emotions seem linger on. You can change a thought very quickly, but if you get a little down because a test didn’t go so great and you let that dominate the afternoon, the night, the next day, it’s trouble.

“When Mopsy keeps getting over 75%, I’m still excited like a little kid and there’s nothing wrong with that little boy coming out every once in a while. I always say the first 50 years of childhood were difficult and now the maturing part is happening.”

Peters, it’s worth noting, won all four FEI classes he contested aboard the eight-year-old stallion Boreas FRF in 2020 as well. Maturing indeed.