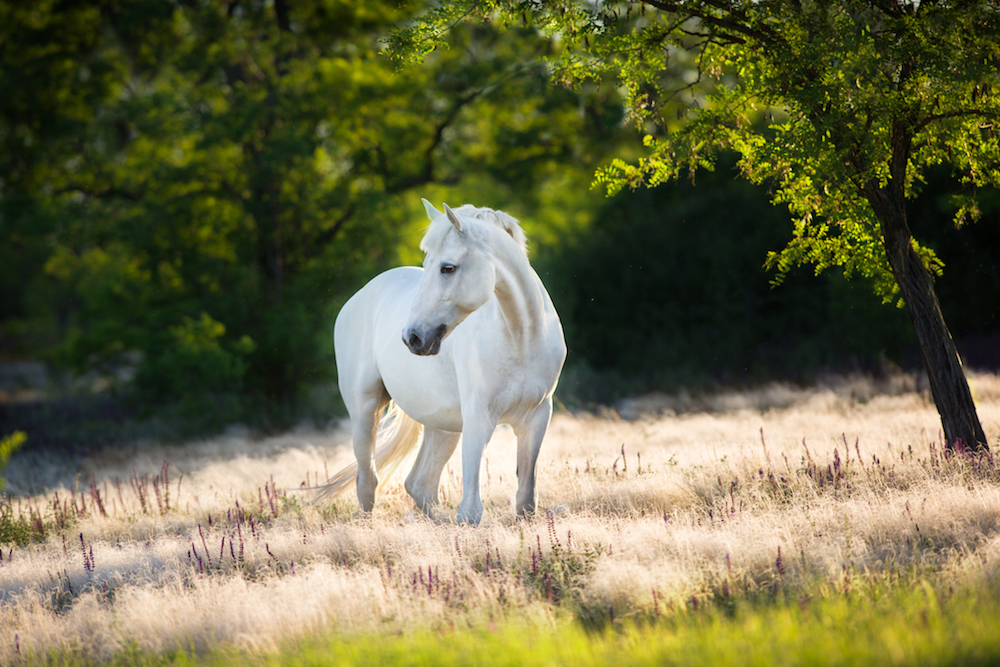 WEST ORANGE, NEW JERSEY—A Garden State trainer was shocked to discover that the genetic roots of her longtime school horse indicate that he is, in fact, 10 percent unicorn. A home DNA test submitted this fall by Creekside Farms owner Karen Walker definitively proves that her 13-year-old Dutch warmblood, Pepper, is partially related to the fantastical, mythical creatures of old.

“To be perfectly honest, it surprised me that his percentage didn’t come back higher,” says Walker, who has been dressing Pepper as a unicorn—complete with a light-up horn—at Creekside’s Halloween costume parades for the past five years.

“Pepper spent his formative career as an equitation horse, competing in Florida and around the East Coast during Indoor season. He always finished up in the middle of the pack in the big classes, but as a school horse, there’s just no one who can touch him.

“He’s just as kind and forgiving as your average, up-down lesson pony, but he’s also tall and elegant; a 10-mover with this massive stride,” Walker explains. “The places I’ve seen him leave from on course with some of my juniors? He’d have to have unearthly talent.”

Walker was given an equine DNA test by her students as an end-of-show-season gift this fall, and felt no hesitation regarding which of her 22 horses she would use it on. “We clipped a small piece of Pepper’s tail and sent it in, and lo and behold, 10–12 business days later, we had our answer. Somewhere in Pepper’s early lineage there must have been a unicorn or two.”

Walker says she’s long-suspected mystical, storybook ancestors in Pepper’s family tree based on the 17-hand gelding’s seemingly otherworldly ability to pack around novice riders, gently nudging them back into the tack when they’re jumped loose, and maintaining his composure in crowded schooling rings, even when the temperature plummets. Then, there were the times when Pepper picked the lock on his stall door at night, helping himself to the feed room’s supply of carrots—but never too many.

“He’s always the perfect gentleman, in every scenario, with every rider he encounters. If I had the ability to buy 10 Peppers, I’d re-mortgage my house in a heartbeat,” confesses Walker, adding that she’s considering having her favorite school horse cloned just as soon as she can save the funds.