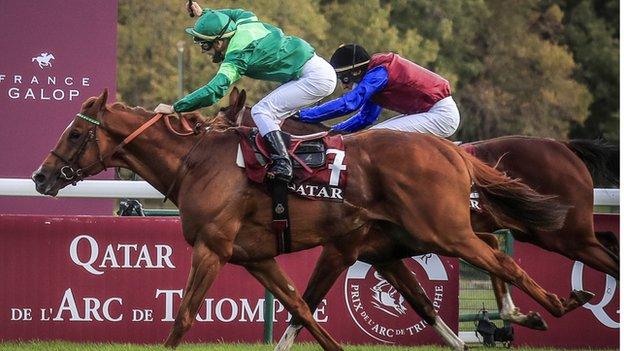 The world was with her, the weather was not.

French Champion Sottsass crossed the finish line first in the coveted $1.5 Prix de l’Arc de Triomphe (G1), but had to await a stewards’ enquiry into interference following the race before being declared the official winner. Cristian Demuro piloted the victor trained by Jean Claude Rouget.

Runner-up position went to In Swoop, third to Persian King, both running for Ireland. The result was made official after the 15-minute stewards’ review of two incidents involving four horses, favored Enable among them. Slow-motion replay appeared to show French three-year old colt Chachnak attempting to bite Enable as the favorite made an early move.

Sottsass, the four-year-old son of Siyouni (out of Starlet’s Sister by Galileo) finished third to Waldgeist and Enable in last year’s Arc and was considered a prime contender among this year’s reduced Arc field.

The Arc is a Breeders’ Cup “Win & You’re In” for a paid entry into the Breeders’ Cup Turf Nov.7 at Keeneland. Initial indications are Sottsass would make the trip after a brief rest.

Enable went off as the 4-5 favorite, but finished a disappointing sixth boxed in for much of the race and on turf soaked by a week of rain. Stablemate Stradivarius ran behind her in seventh.

The favorite ran her usual stalking race in the middle of a tight group while Persian King took an early lead and led through much of the contest. Enable was well-positioned turning into the stretch and was turned out from the bunched pack by regular rider Frankie Dettori to challenge for the lead. As happened last year on similar ground, Enable could gain little late momentum on the rain-soaked turf, up to some runner’s ankles in places.

“She hated the ground,” Dettori said of the saturated turf. “I knew my fate at the 400 meters. She’s still the queen of my heart.”

Regarding questions about a decision on retirement from racing, Enable’s trainer John Gosden tweeted a mild surprise: “Definitely not for a week. Prince Khalid always likes to know how his horses are. It wasn’t a taxing race.”

Gosden’s tweet mirrored comments of racing manager Teddy Grimthorpe before the race. He questioned the assumption Enable would be retired by saying, “Whether it’s her last race…that’s up to Prince Khalid to decide. We don’t know.”

The race was marred by gloomy skies, a COVID-19-vacant Longchamp-Paris grandstand, the stewards’ enquiry into two incidents, one involving Enable, and a field reduced to 11 when Aidan O’Brien’s four Arc horses were withdrawn last night. All tested positive earlier for the prohibited substance Zilpaterol in tests undertaken as a precaution.

Japan, Sovereign, Mogul and Serpentine were believed to be exposed to feed contaminated with the Zilpaterol, a mass-enhancing additive used in feed for cattle headed to slaughter. Its effect on horses is believed similar to methamphetamine and is a banned substance.

Irish trainer Aidan O’Brien and his trainer sons Joseph and Donnacha withdrew a total of 11 horses from Arc-day races.

“Unfortunately the results of the urine samples taken from the horses have come back positive from the French laboratory,” said a statement from O’Brien’s Ballydoyle Racing.

“There is a possibility that the contaminant may have left their system by the time of racing on Sunday; however, we have no guarantee of this.

“In order to protect the integrity of racing, we have decided to withdraw all our horses from racing [on Sunday]. Joseph and Donnacha O’Brien will do likewise.”

Roger Varian, a British who uses the same feed supplier, withdrew his seven runners from meetings on Saturday.

If retired to Prince Khalid Abdullah’s Juddemonte Farms, the race would be a disappointing finish to Enable’s stellar career.

Feature image: Sottsass wins the Arc by a neck over In Swoop following stewards’ inquiry. ©FranceGalop

All I Do Is Win, Brian Morton Edition

17-Year-Old Carly Stevens Rides Away with U25 Title

Shedding Drama at the Door

All I Do Is Win, Brian Morton Edition

Rapper DJ Khalid and hit makers Ludacris, Rick Ross, T-Pain and Snoop Dogg might have made the phrase famous with their club banger "All I Do Is Win." But Canada's...

If you've been following the Thunderbird Harvest Welcome this week and didn't know who Katie Laurie was before, you certainly do now. On Thursday, the Australian rider captured the $37,000...

17-Year-Old Carly Stevens Rides Away with U25 Title

From third on the leaderboard to fifth then straight to first—the FEI U25 Division's youngest competitor at Thunderbird Show Park rode away with the biggest purse and the Series Championship...

There's $20,000 on the line this week in the international U25 Division at Thunderbird Show Park. Plus, a $1,000 bonus to the Division Champion. That unprecedented prize money is making...

Katie Laurie may be from down under. But she's coming out on top at Langley, BC's Thunderbird Show Park. Making her first international appearance with Casebrooke Lomond in Canada since...