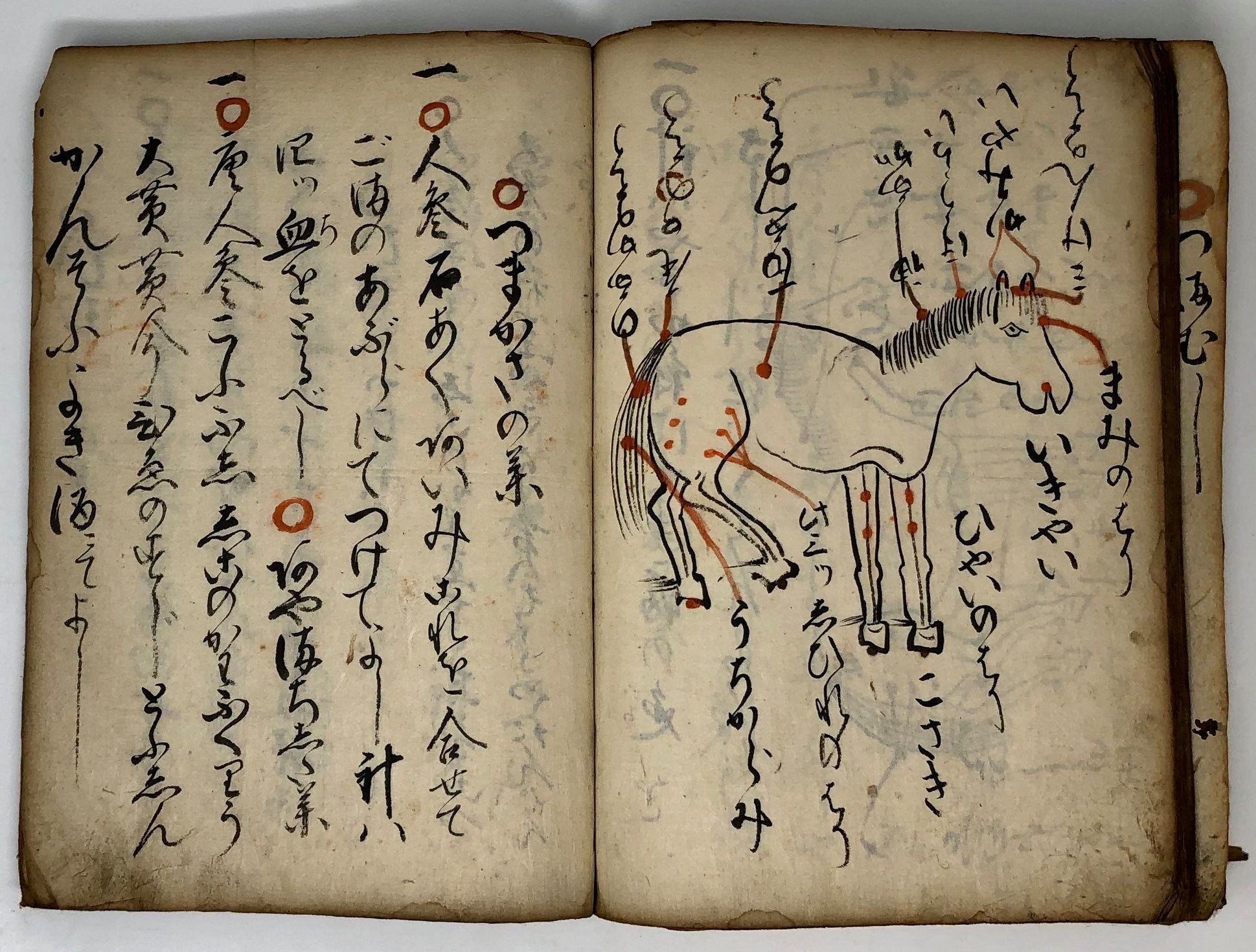 To Dr. David Ramey, a mystery is something that is begging to be solved. And he happens to have one sitting in on his desk at home: a very old manuscript on treating horses from Japan.

At once art, history, and medicine, the book features extraordinary illustrations and reveals an area of horse medicine that is essentially unknown. There’s just one problem… it’s in old Japanese and even native Japanese speakers can’t read it!

Dr. Ramey endeavoring to have the book translated and published—and the mystery solved. He’s recruited an expert to help

Here’s a sneak peek, courtesy of Dr. Dan Sherer, of the University of Jerusalem, who translated a commemorative page.

Here’s what the text on the right says:

Kanseon (better known in Japan as Kannon and in China as Guanyin) is the Japanese rendering of the goddess of mercy, Bodhisattva Avalokiteśvara. The horse-headed form has since at least the Edo Period (1603–1868) been seen as a protector of animals in general and of horses in particular. In Japan, images of the Horse Headed Kanon are often found at the sites of racetracks and stables to commemorate horses who have died.

Crossed to Japan in the Sixth Month of Bunryaku 3 (Older Brother of Fire, Monkey)

This would be 1236, but the Bunryaku era ended in its second year (1235) because of an earthquake; 1236 would properly be the second year of Katei. The sexagenary cycle position of Older Brother of Fire, Monkey does match with 1236.

In the text to the right of the illustration, at the very top, take note of the character 馬 . That’s the Japanese character for “Horse,” pronounced “uma” or “ba.” While most of the text is unreadable—except to scholars who study such things—it’s fascinating to see that some things don’t change. And, of course, the Japanese characters were adopted from China—in traditional Chinese, the character is 馬 (Mǎ) and there is certain to be a considerable amount of Chinese influence in the medicine in the book.

Even from this little snippet, we know that the information in this book is very old, and we know that it’s likely to have been compiled by someone with some considerable knowledge (literacy was not widespread at the time). The book was written during the Kamakura Period (鎌倉時代, Kamakura jidai, 1185–1333), established in 1192 in Kamakura, south and a bit west of modern day Tokyo.

The Kamakura period is known for the emergence of the warrior caste of Japan, the samurai—and the samurai rode horses. It’s also the period known for the establishment of feudalism in Japan (feudalism is a type of government where a weak monarchy, in this case, the emperor, tries to control an area of land through agreements with wealthy landholders).

Interested to learn more about this project? Fill out the survey!