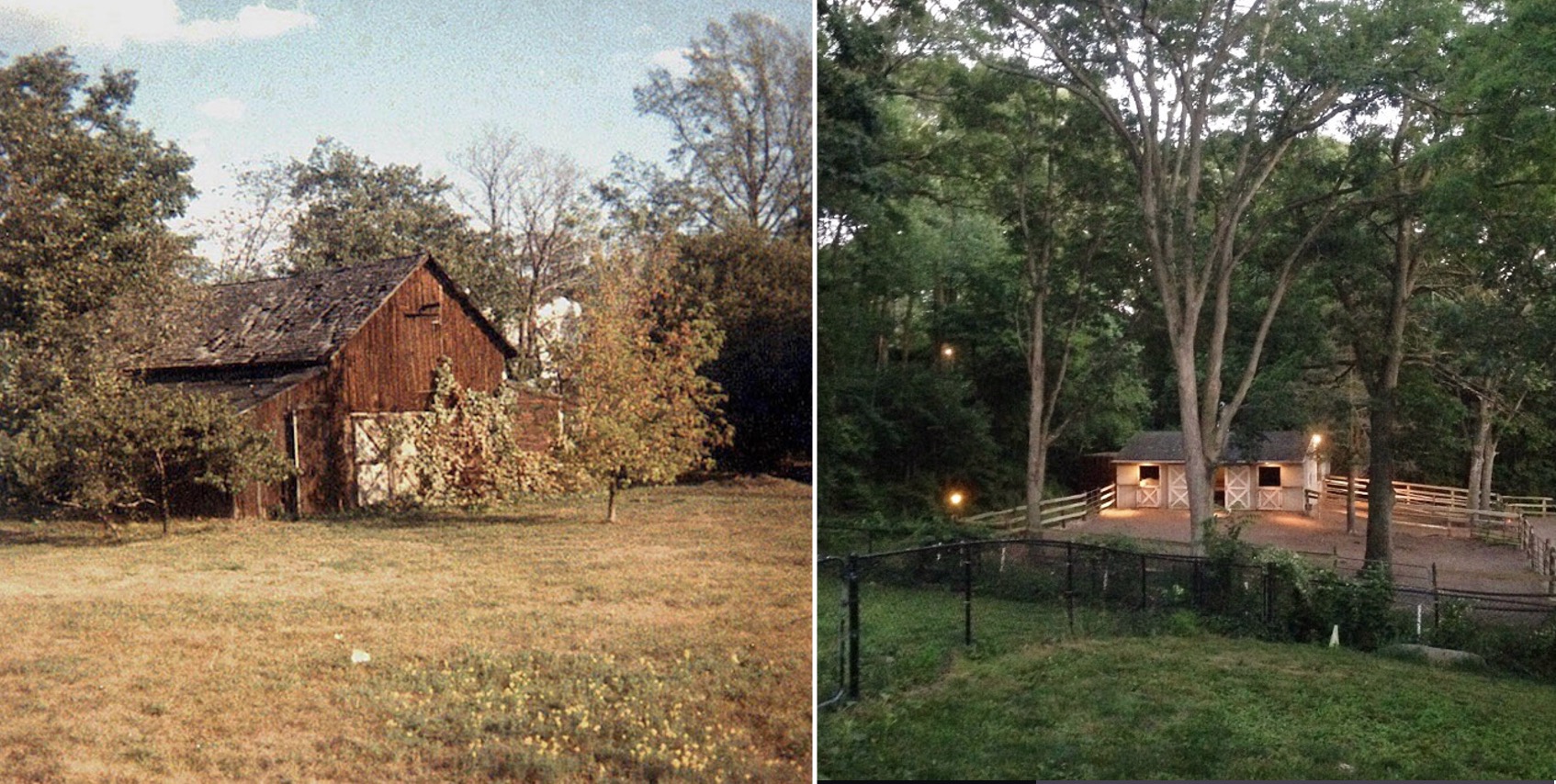 The house I grew up in was a charming little Cape Cod in a post-war development of similar homes on the North Shore of Long Island, NY.

It sat on a lot measuring 60 X 100 feet, but it seemed much bigger to us. Behind the maple tree in the back yard, the terrain dropped off to a flat, grass field of about an acre’s size, and around three feet lower than our property. It gave the visual appearance of a much bigger property than we actually had, and we were allowed to use it to play ball and frisbee and catch fireflies on summer evenings. We called the field “Perkins’ Lot” after the family who owned and maintained it, the same family that ran an old-time pharmacy in town.

In the far left corner of Perkins’ Lot stood a very old horse barn that by then served as a somewhat precarious garage for one of the Perkins brothers’ 1953 Plymouth Savoy.

In the neat but somewhat cookie-cutter similarity of working-class tract housing, the view from our backyard was uniquely bucolic, even for that era.

The field was separated from the nearby elementary school fields by a row of scrub trees, and even though it was neither fenced nor completely isolated, it was a rare day that any uninvited kids from the school grounds infiltrated “our” field unless invited. If I had to now choose a word to represent the memory of feelings I got from my days looking out over that field, it would be “serenity.”

We were uniquely privileged to grow up with that resource, but of course we didn’t realize it. That was just the way things were.

Years later, as the owners of “our” lot successively passed away, the property was sold and developed into an assisted living facility. As young men do, I eventually moved away from that little house and yard and started my own life with my wife Mary in a community of eclectic little houses in a beach community in the next county. It was a charming place with little houses and bungalows terraced into hillsides, most having been converted to larger houses more adapted to raising families.

We had one of the enclave’s newer houses, 25 years old as opposed to the more common 60+ years old, and the neighborhood included a small private beach, boat ramp and pavilion. We had no reason or desire to ever move; no reason at all.

Then I discovered horses.

As my interest and enthusiasm for horses and riding blossomed, I realized that I wanted more than riding and lessons and trail rides—I wanted horse property. I wanted my own horses and I wanted to live with them. I was lucky enough to have a wife who wanted me to be happy and sensed how happy I was in my new-found element, and so the search for horse property began.

Being somewhat impatient when I can clearly see the path in front of me, I naturally wanted a ready-made horse facility. I was amazed at how many horse properties existed on Long Island, and how varied they were in size, utility and character.

Surely, I thought, I would have no problem finding the perfect fit. After looking at dozens of properties, I wasn’t so sure.

There was the one with a beautiful house, but a poorly situated barn with rocky and hilly paddocks. There were some that covered many of the requirements on my list but were too far from our jobs. There were a few that were good in many ways, but were located on busy roads, which for us was a deal breaker, and some with park access, but barely enough room for a round pen on the property. Some had beautiful barns but no natural privacy, it felt as if everything we would do would be on display.

Nothing felt right. Was I just being fussy, or was it that I truly had no idea what I wanted? In desperation, I extended our search to include properties zoned for horses but with no existing horse facilities.

Armed with these new parameters, after a few false starts we found an older house in an small community that seemed to cover all of the bases: the house was dated, but had potential. It had enough bedrooms and bathrooms and an office for my business, was on a quiet street and had a separate driveway leading to the back yard, which offered natural privacy. There was a buffer of un-developable property in the rear and left side.

The site would require a lot of work to develop, including removing a huge, overgrown concrete in-ground pool, extensive tree removal and grading for the barn, paddocks, riding ring and roadway, as well as fencing, barn construction and utilities. A big undertaking, for sure, but one I felt was not only do-able, but it was the right thing to do. It felt right.

We signed some papers, and jumped in with both feet.

In the ensuing year, with some money, luck, work, support and help, we created Dreamcatcher Farm, home to our growing family of humans, dogs, cats and horses for more than twenty years, now. When people would ask about the vision I had for this property, I used to wax on about how we outlined our priorities, starting with the “must haves” and only when all of those had been met, moved on to the “nice-to-haves.” It was all about the list and about being logical and not getting caught up in emotion.

I believed it when I said it; I really did.

And it wasn’t until several years later when I was sitting on the deck overlooking the property that I realized I had no idea what I had been talking about.

I looked past the maple tree, down to the gate where the property dropped down about three feet and leveled off. I looked around at the row of trees which screened without isolating, and at the woods to the left side and rear, which made the property appear bigger than it actually was. A few hundred feet straight away from our back door stood the horse barn, with the horses peacefully grazing in the evening shade.

I realized then that what I had been looking for was serenity.

I was looking for Perkins’ Lot—and I had found it.