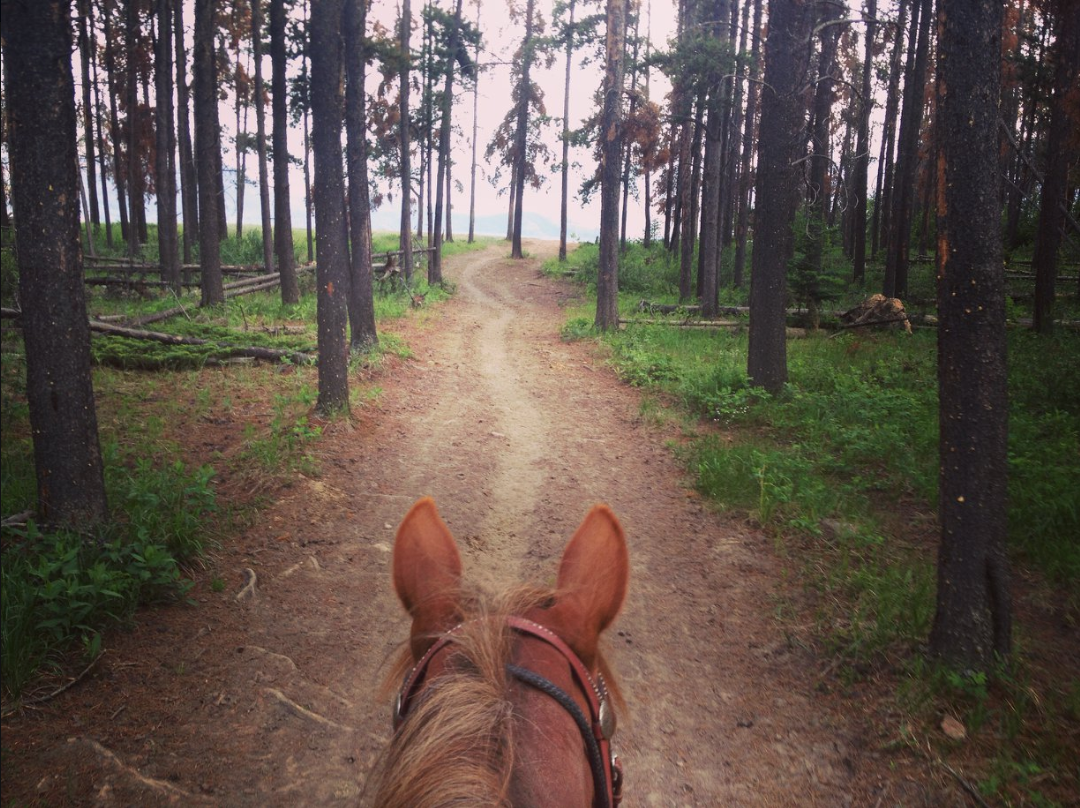 It had been a while since I’d been to a seven-year-old’s birthday party, but from what I remember, they didn’t normally have bears in them.

Teddy bears, sure. But black bears?

It probably shouldn’t have come as such a surprise. It was the middle of July and I was working at a trail stable in Alberta, smack in the middle of Canada’s Rocky Mountains.

That afternoon, myself and two other guides set out with a seven-year-old birthday girl, her four best friends, and one adult supervisor. The kids were all clearly horse nuts: dressed to the nines in cowboy boots, sparkles, and bandannas, they chattered excitedly as we loaded them onto five of our best kid’s horses.

I figured it was going to be an easy ride. The kids were practically entertaining themselves, the horses were all calm and happy, and it was a boiling hot day, so wildlife sightings were slim—on hot days the mountain wildlife tended to hide in the shade, rather than be out and about.

I was mostly right about that last part.

We were halfway through the ride, crossing through a patch of trees, when I saw it: a black bear, young but decently sized, happily resting in a patch of shade he’d found—smack in the middle of our horse trail.

I halted our ride and waited to see what he would do.

Normally, when we ran into black bears, they ran away as soon as they spotted the horses. But it was over 30 degrees. The bear was very hot, he’d found a lovely cool place to lie and, as it turned out, he wasn’t keen on moving. He spotted the horses, hesitated, but stayed down.

At the same moment, the kids realized what was going on and became immediately convinced that their seven years on the planet was about to come to a premature end.

I assured them we’d all be fine—I was just going to make a little noise, and the bear would leave (this strategy had worked for 100% of my 40 or so bear encounters).

I made some noise. The bear did not move.

I made some more noise. The bear stood up.

The kids started freaking out in earnest now, and the horses—who’d been standing still, floppy-eared and half-asleep, not caring one ounce about the bear—began to tense up from all the shrieking.

I glanced back, hoping one of the other two guides could help, but our neat little line-up of horses had turned into a bunch, and they were busy trying to keep everyone together.

I yelled at the bear more, waving my arms, and that did it. Terrified, the bear turned and tried to get away from us. Unfortunately, instead of running away, it took the nearest escape route: climbing a tree that stood one foot away from the trail.

Now, I’m pretty bold, but one foot is not enough space to get safely past a bear.

I kept making noise and we waited where we were, hoping for him to come down and move. Turning around was an option, but not a great one: the bear might think we were fleeing and decide to follow us.

Meanwhile, one of my young riders was terrified, so I took hold of her horse’s lead to reassure her. Another kid’s horse had forgotten about his stellar reputation and was trying to escape the screams by ditching sideways into the woods, so I had to grab him, too. It was the greatest test of my skills to date: hanging onto two horses, yelling away a bear, and attempting to keep everyone—including myself—calm.

Eventually, all the screaming did it: the bear climbed back down and ran away. We didn’t see him again.

Cautiously, we carried on; a few minutes later, everybody was walking in a pretty line and we were all beginning to relax. We reached a beautiful ridge line where the trail dropped off on one side, allowing for beautiful mountain views.

And that’s where Marshmallow, a big, fluffy draft cross, carrying the one adult at the back, spooked himself with his own fart.

Every single horse in line flew forwards five feet. The kids began screaming again. We managed to get them all stopped and told everyone through forced smiles and gritted teeth that we were fine. I met eyes with the other guides, and we silently and unanimously agreed: we were taking a shortcut back to the barn.

The ride ended up being just short of the full hour, but nobody cared; they were too relieved to get off.

Within minutes of dismounting, the young birthday girl and her friends had recovered. They raced around, petting every horse in sight and chatting happily about the adventure we’d all just had.

I couldn’t help but smile, and helped them feed some treats to their horses.

Honestly, these animals. They may be beautiful, goofy, sometimes brave, and occasionally lacking in brains, but like nothing else, they keep us laughing.

Caelan Beard is a travel writer and horse enthusiast based out of Toronto, Ontario. She recently completed her third summer working as a trail guide in Jasper National Park, Alberta, where she spent her days leading people on horse rides through the Rocky Mountains. Check out her blog, The Wandering Years.