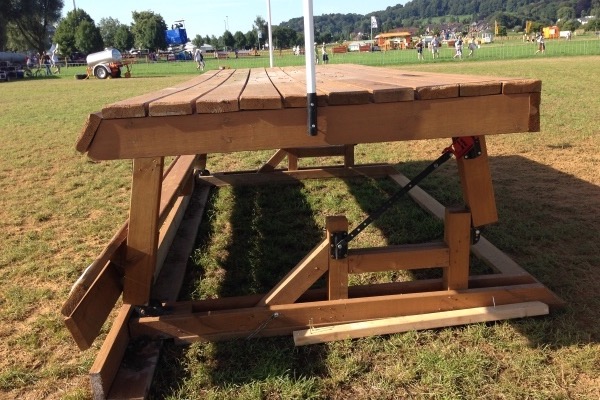 Spurred by the tragic deaths of 33-year-old eventer Katharine Morel (CAN) and her horse, Kerry On, at Rocking Horse Winter III Horse Trials in Altoona, FL last weekend, Holling is spearheading a fundraising effort to make cross country fences safer for horse and human competitors alike.

On Saturday, Feb. 29, Morel and Kerry On suffered a fatal rotational fall at fence eight on the Intermediate level cross country course. Rotational falls are the leading cause of accidental death in three-day eventing and occur when a horse hits a solid fence between the knees and chest while moving at speed, subsequently flipping over.

“So, I’m sitting here in the parking lot after another weekend where we tragically lost another horse and rider to an accident on cross country,” starts Holling in the video.

“Typically, what happens at the end of these weekends is we all feel bad and horrible about what happened. And we say nice things on social media and on Facebook and we talk about the person and we all sort of rally together. And because we’re fighters and warriors we kind of move on to the next competition. We press on and we just try harder…”

But the time for empty accolades and heartfelt remembrances has passed, he says: “It’s time to be doing something real, that’s going to make an actual difference.”

Developed by engineers, frangible technology uses pins and hinges that allow a previously immovable fence to break and swing down if hit by a horse, reducing the risk of a fall for both rider and horse.

The technology is already in use in competition. As of July 2018, the United State Eventing Association (USEA) passed legislation requiring all fences above the Training level to employ frangible technology where possible.

Retrofitting fences, however, has proven challenging and expensive, costing a reported $1,000 per jump on average, depending on lumber costs for the location.

The USEA currently donates $26,000 to frangible technology grants every year, says Hollings. But it’s a far cry from the actual need.

“That money goes directly to the competitions to try to fund the fences, so we have the technology on course that we need. And that’s a really good start, but it’s not nearly enough,” he says. “We need to raise real money.”

Together with co-chairs Emily Holmes and Andy Bowles as well as Robert Kellerhouse, Leslie Law, Kyle Carter and Doug Payne, Holling has set a $500,000 fundraising goal to ensure all tables at the Preliminary Level and above are collapsible within three years.

“In the U.S., we have 108 preliminary tracks, 50 Intermediate tracks and 19 Advanced tracks. In addition to this, we have various FEI tracks that will also need to be factored into the mix. If we said that that there are a minimum of 2 tables per preliminary track, 3 per intermediate track and 4 per advanced track that would equate to approximately $450,000. This would be the minimum hence the target of $500,000,” reports the group’s GoFundMe page.

The ultimate objective is more ambitious still. Once all tables are retrofitted with the MIM Table Kit, the aim is to help fund all frangible devices including Oxer, Post and Rail, gate kits for new fences.

“No more excuses. It is not up to the governing bodies to manage this for us all the time…it’s up to all of us,” says Holling in the video.

“I’m tired of watching us die because we make a mistake when there’s technology that can help.”

Concluded Holling: “Yes, it comes down to rider responsibility. Yes, we have to ride well. Yes, we have to have good courses. Yes to all of that stuff. But to have the technology out there that can make it that a table collapses when a rider makes a mistake and not use it is just inexcusable.”

Donations to the frangible technology initiative can be made through the USEA website or through the GoFundMe page set up by Andrew Bowles. At the time of press nearly $27,000 has been raised.