Is This the World’s Best Jockey?

Home > Blog > Racing > Is This the World’s Best Jockey? 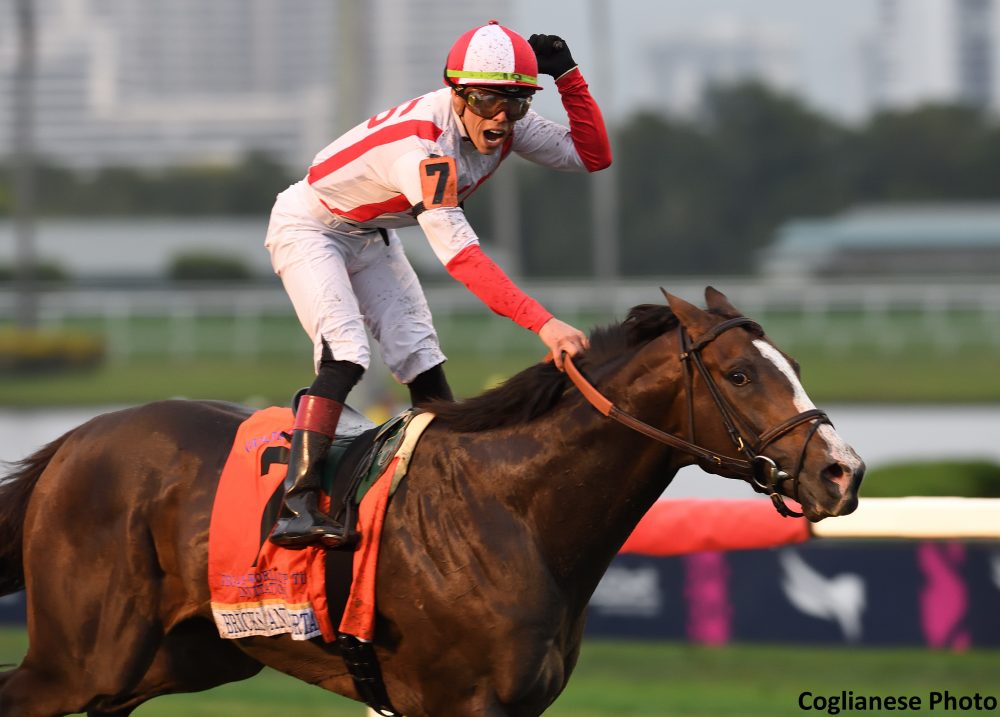 January 2020 was a monster month for Irad Ortiz Jr.

On Jan. 21, he jumped off his assignment on Spun to Run in the Jan. 25 $3 million Pegasus World Cup, opting instead to guide Mucho Gusto for the first time. That left Spun to Run riderless, but Ortiz Jr. would seem oddly inspired when Spun to Run was scratched from the race two days later after developing a case of hives.

That still left Omaha Beach the clear favorite in what would be his final race before retirement to stud duty at Spendthrift Farm…but then Omaha Beach was scratched after trainer Richard Mandella noticed swelling in his left hind leg that suggested a possible fracture.

Ortiz Jr. seemingly had made a prescient choice.

Thursday night, Jan. 23, Irad Ortiz Jr. captured his second consecutive Outstanding Jockey Eclipse Award in ceremonies at Gulfstream Park in advance of the Pegasus World Cup. He was the year’s winningest jockey with the highest total of purses, but his signature achievement over 2019 was as regular rider on 6-for-6 winning Bricks and Mortar, named Eclipse Horse of the Year and Eclipse Male Turf Champion in a unanimous vote.

The great races in America—the Kentucky Derby, Preakness, Belmont Stakes, and Breeders’ Cup Classic—are run on dirt, and the great horses are those that overcome bad gate placement or severe dirt kickback and find a way to win.

But there is the occasional turf horse with a resume so outstanding, one even admirers of dirt horses can’t ignore. That was Bricks and Mortar, sealing the Eclipse Award sweep when Ortiz Jr. moved him to the outside from a boxed-in position to take the Breeders’ Cup Turf in an inspiring late run. Bricks and Mortar has since been retired to stud duty at Shadai Farm in Japan.

He came back later that day aboard Vino Rosso to take the Breeders’ Cup Classic on the controversial dirt at Santa Anita, landing the Older Dirt Male Eclipse Award for the son of Curlin:

“I had a great trip. He got a great start and felt good,” said Ortiz Jr. after the race. “At the three-eighths pole I tipped him out and he took off. He was much the best. He’s a nice horse.”

The win came with an automatic invitation to the $20 million Saudi World Cup on Feb. 29, initially denied the winner as he had not yet won a G1 fixture. Ortiz Jr. will be on board Mucho Gusto in Riyadh for that race.

It’s fair to say Ortiz Jr. is in a zone.

Irad and brother Jose are Puerto Rican-born siblings who have competed against each other while vying for top leadership rankings in the New York racing circuit since 2012. Both come from a racing family. Their grandfather, also named Irad, was also a jockey as was their uncle Ivan.

Ortiz Jr. graduated from Escuesl Vocacional Hipica, a Puerto Rican school for prospective jockeys, and then moved to the U.S., finding near-immediate success and earning a 2013 Belmont Stakes ride aboard Kiaran McLaughlin-trained Incognito, finishing a decent fourth to winner Palace Malice at 20-1 odds and earning Ortiz Jr. some credit for his ride.

The next year, 2014, was his breakout year. He won 15 graded stakes races including G1 wins on Sweet Reason and the Juvenile Fillies Turf on Lady Eli at Santa Anita, his first Breeders’ Cup victory. In 2015, he guided Stephanie’s Kitten to a win in the 2015 Breeders’ Cup Filly and Mare Turf at Keeneland.

He garnered a third Breeders’ Cup win in 2017, guiding Bar Of Gold to a 66-1 upset win in the Filly and Mare Sprint.

The significant wins kept coming: a front-running Breeders’ Cup Juvenile Fillies Turf win on Newspaperofrecord on Nov. 2, 2018 and victory the next day in the Filly and Mare Sprint on Shamrock Rose. The wins were piling up. His 2018 record earned the Eclipse Jockey Award.

In 2019, he rode 259 starters to 64 first-place finishes, a 25% strike rate in a sport that considers a 16% strike rate exceptional. His winning purses totaled $4,267,383. He was the regular rider for HOY Bricks and Mortar and made that intuitive choice in Mucho Gusto. Those numbers and those signature wins resulted in a best-ever year and a second consecutive Eclipse Jockey Award.

“I worked for where I am now,” Ortiz Jr. said accepting his Eclipse Award. “I worked to be one of the best in the country, to win each race, every time.”

Yet, those figures earned him only sixth place in the international jockey rankings by the Thoroughbred Racing Commentary, though he is placed first among jockeys based in the U.S., and a startling 25th place by the International Federation of Horseracing Authorities.

Both ranking authorities use a complex rating formula that can handicap a rider if he is not on a highly ranked horse in a highly ranked race. So, while Ortiz Jr. can make lemons out of lemonade, his mounts aren’t always held in the highest regard…until he wins.

…because horse, and especially rider, are in a zone.