Where to Watch the Paris Masters

Home > Blog > Show Jumping > Where to Watch the Paris Masters 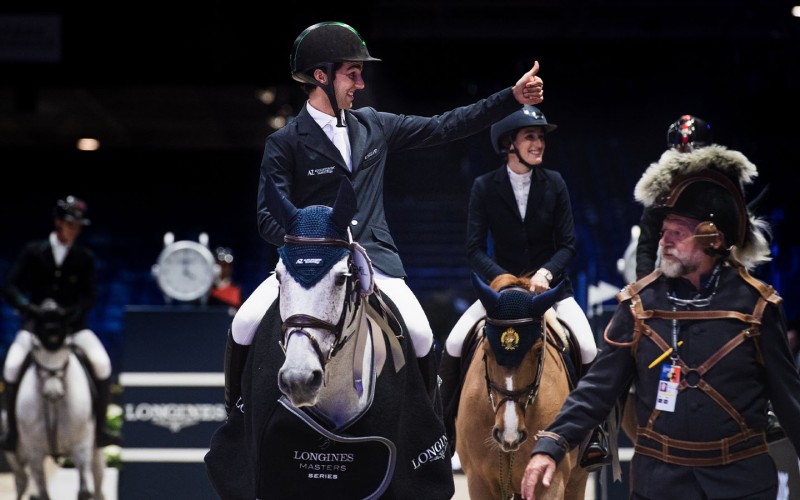 Three-time Olympic medalist Eric Lamaze (CAN)—star of Monday’s can’t-miss episode of the Under the Saddle with Adam Cromarty podcast *gratuitous plug*—is competing in the city of love this weekend, along with Americans Laura Kraut, Spencer Smith, Paris Sellon and Jessica Springsteen and Canada’s Kara Chad.

SO, if you can’t be in Lexington soaking up four days of EQUUS Film Fest festivities in the Wrigley Media Group Theaters *shameless self promotion* and/or need a break from browsing the curated selection of fine goods in the Horse Network Store *glaring product placement*, this is a rather excellent consolation prize, don’t you think?

Created by EEM in partnership with the European Equestrian Federation (EEF), the Riders Masters Cup is a clash of show jumping titans that pits Europe against the Americas. Five riders, including a promising rider under 25, go head to head over two rounds of duels as the team captains take turns choosing the opponents. Strategy plays a major role, so far Europe has the winning one with a 4-0 streak. Riders USA will be looking for redemption.

A fan favorite, the Longines Speed Challenge was created by EEM in 2010 and features a daring and technical course that is repeated in Paris, Hong Kong, New York and Lausanne each year. Knocking down an obstacle penalizes the riders by two seconds instead of four faults. If a fence comes down, the riders pick up their pace to try their luck. There’s also a 50,000€ bonus on the line for the fastest rider of the season.

Closing the weekend is the Longines Grand Prix. With Olympic heights of 1.60m, it’s “the ultimate test of technicality, sporting performance, agility and bravery” says EEM. In addition to the €300,000 prize money on the table, the Paris, Hong Kong, New York and Lausanne Longines Grand Prix offer a Super Bonus of €2,250,000 for a rider who wins all four in the same season and a €1,000,000 bonus for three successive victories in the Longines Grand Prix straddling two Longines Masters seasons.

Unless you’re in Lexington, of course. In which case head over to the Kentucky Horse Park for the EQUUS Film Fest already.