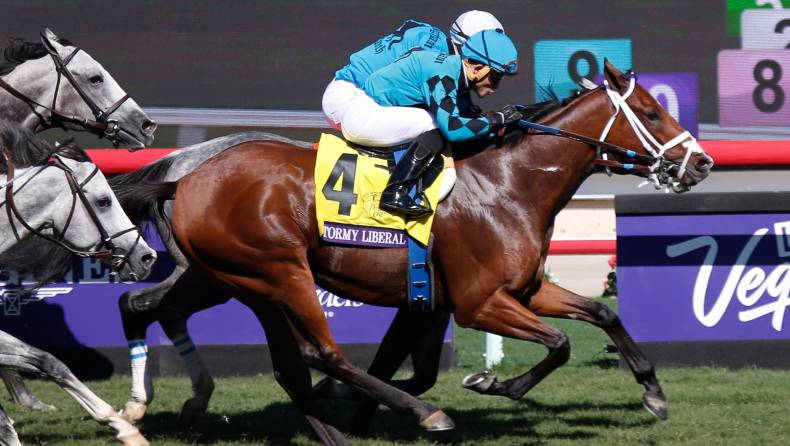 A week of controversy regarding the future welfare of multiple graded stakes winner and two-time Breeders’ Cup (G1T) Champion Stormy Liberal was resolved Wednesday when new sole owner David Bernsen announced that the seven-year-old Stormy Atlantic gelding would be retired to Old Friends in Georgetown, KY within a month.

“After completing an extensive medical evaluation of Stormy Liberal that was overseen by David Scanlon of Ocala, Fla., I am announcing that the two-time Breeders’ Cup winner and reigning North American Older Turf Champion has been retired and will be relocated to Old Friends Thoroughbred Retirement facility in Georgetown, Ky.”

“In discussion with Mr. Scanlon, we agreed on a two-stage process: first, an extensive racing soundness exam that included X-rays, scans, and bloodwork, followed by a more extensive procedure known as a ‘nuke scan.’

“After Stormy passed the initial test, we then conducted the ‘nuke scan’ of his entire body to make sure nothing was missed. This was conducted this past Monday, and Mr. Scanlon and the primary veterinarian saw an irregularity that did not show up on X-rays or in the initial exam, and they decided to go one step further with an MRI on both ankles.”

The MRI discovered “full thickness cartilage defects on the palmar (back) aspect of the medial condyles in both front fetlocks. The lesions were determined to be a potential threat to the gelding’s soundness, and a period of six to eight months’ rest from training was suggested.

“Based on the above results, Stormy Liberal has been immediately retired and will spend the next month in Florida before being transferred to Old Friends on an agreement I had previously reached with Mr. Michael Blowen of Old Friends,” Bernsen’s statement continued.

“I feel it is important for the industry and the welfare of all racehorses to provide some transparency as to the process involved.”

Claimed for $40,000 by (trainer) Peter Miller and Rockingham Ranch in Oct. 2016, Stormy Liberal earned a 12-10-4 record over 37 starts and purse earnings of $2,212,580. Winless in seven starts this season, Stormy Liberal made his final appearance on the track in the Nov. 2 Breeders’ Cup Turf Sprint at Santa Anita where he finished off the board.

At that time, trainer Peter Miller contacted Michael Blowen, president and CEO of Old Friends about the possibility of retirement. Blowen responded “…there will always be a home for this magnificent Champion at Old Friends.

“I would like to also personally thank David Scanlon and the medical team involved for uncovering a previously undiagnosed condition and their help through this process. Myself and Gary Hartunian of Rockingham Ranch are immensely grateful to have been able to race such a magnificent horse and hope his retirement to Old Friends will benefit all retired horses.”