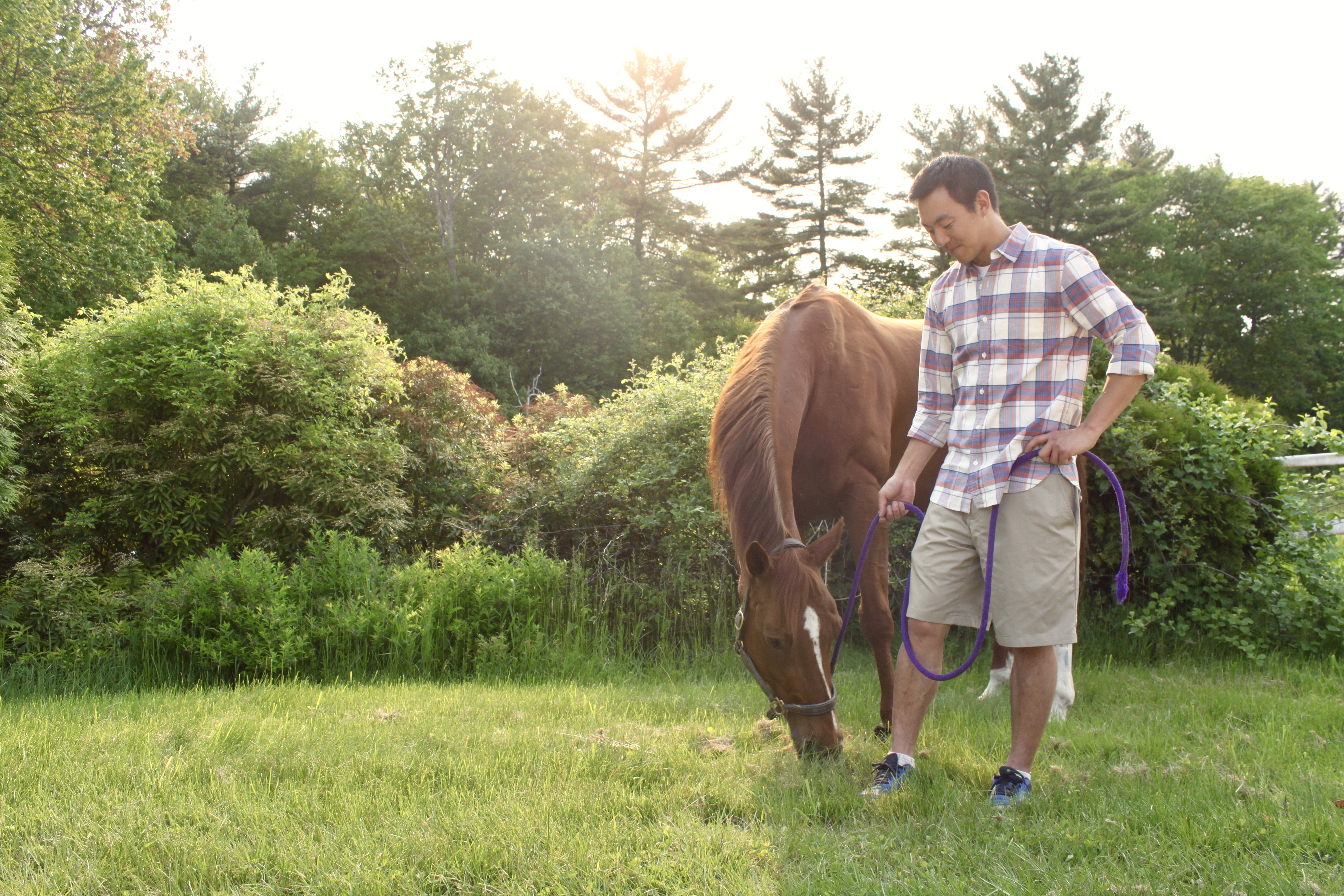 It was over six-years-ago when the rickety trailer, jostling with rusty bolts, pulled through the driveway of the New Hampshire farm I rode at.

Our stable relied on an aging dealer to supply horses for the lesson program, and with the prophetic chill of winter cutting the air we had plenty to choose from. Small stables and racetracks in New England grew desperate to move out their overflow horses before the first snow. As a result, it was a mixed bag (or trailer) of the equine variety.

This time, the question mark flying backwards off the ramp was a skittish chestnut mare with a skeletal silhouette. She had no name, record, and, judging by her demeanor, was presumed unbroke. I exchanged a knowing look with my best friend, for we were both certain this one already had her return ticket for the big-red-gooseneck purchased and punched. After the trial period was over, it would likely be off to the next farm.

The German who captained the stable could flick several languages off his tongue, including a near-perfect English, but still he didn’t speak the learning language of every horse and rider. His program was founded on sink or swim philosophy, and those put into the lesson rotation had to be fish.

But weekend stable help Jonathan Hall was watching from the barn aisle, and he had a dually different perspective.

Hall had been searching for horses for six months before that chestnut mare arrived, and was growing desperate to put a pair of reins in his empty hands. Like many, he went in clutching a laundry list of criteria with dreams of a perfectly tailored fit. At the time, Hall lacked experience in English riding, so per the trainer’s advice he sought an older horse with lesson experience to help him develop as a rider.

Cupid’s arrow, though, tore straight through his list and into hindquarters of an unstarted Thoroughbred.

“The moment I saw her I said, ‘This is it, this is the horse for me.’ There was just something in her eyes,” said Hall, “I was just so in love that I had to have her.”

Hall isn’t the first to fall under love’s spell. Selena Gomez’s 2015 single “The Heart Wants What it Wants” wasn’t a Top 10 pop anthem because the experience of a head and heart at odds is unfamiliar.

He decided that as long as she didn’t toss the first rider out of the saddle (me), he would buy her. I held on as earnestly as he did his promise, and Jane Doe became Scoopers Hall.

The honeymoon period lasted all of a day.

“The second day she started throwing riders left and right. She had a lot of problems, she had really bad worms. She was difficult to handle. It took me six months just to be able to sit on her…” Hall said, exasperated as he recounted the trials of the early days with Scoopers.

Ironically, it was his experience outside of horses that would be integral in guiding him through training his first horse and navigating the challenges presented by the opinionated mare.

“[At the time] I was also working for a company who worked with at-risk youth who had some anger management, behavior modification, anxiety and substance abuse issues. Through all the work I’ve done I’ve found that I really love those kids. I like being able to help them work through those issues, and I feel like Scoopers was like one of my kids. She needed me to do the same for her,” said Hall.

With the organization, he took the kids to a farm every week. There he saw firsthand the therapeutic effects horses can have, while also offering advice on how to develop the program so that it better suited the kid’s wants and needs. Hall then took it a step further: he started bringing the kids from the Autism House to a stable called Green Acres, where he was then boarding Scoopers.

“These kids were just amazing. They would wake up an hour earlier than they needed to, then all get in the van and drive down to Massachusetts,” he said, explaining that they spent the mornings volunteering at an animal sanctuary, and then headed over to Green Acres to visit the horses and help with barn chores.

“It was really, really amazing to see,” he continued. “They just loved it. I think it was really great for them to be in a normal barn, interacting with people in a normal way. They were always really respectful and the parents [of the other riders] thought it was cool and loved having them there too.”

Working with the kids in a stable-setting is what eventually inspired him to become a certified therapeutic riding instructor and build a business of his own. It’s one he would call Therapeutic Riding On Thoroughbreds (TROT).

Said Hall, “When you see a wheelchair bound kid get out of his chair and onto this big horse it’s amazing, and for them too because it’s a real sense of independence.”

He ultimately founded TROT for two reasons: to provide children and adults with disabilities the benefits of therapeutic riding and as way of reducing the negative stigma behind off-the-track Thoroughbreds.

The “negative stigma” is the assumption that all OTTBs are finicky, hot, and difficult to retrain. Instead, he sees intelligence, personality, and the result of a difficult past. While he admits not every horse is perfect for every program, he believes they’re an often overlooked breed with a lot to offer.

Today Hall owns four Thoroughbreds, three of which he uses in the TROT program. Scoopers still has her quirks, and Hall is judicious about who rides her, but through years of diligent training she’s come a long way from the horse with an affinity for the rider-eject button.

“I have some kids that get on her, and they can have their hands up in the air, waving around, pulling on her, and she does not care. She just bops around and takes care of them,” said Hall.

It’s a common question with a complicated answer: when the dust from racetrack settles, where do all the Thoroughbreds go?

The successful ones go to stud, the others are disseminated into different disciplines. Some end up at auction. But a lucky few are in New England, in Hall’s growing TROT program.

For Hall, his favorite thing about his Thoroughbred-centric program is his rider’s ability to see themselves in the horse.

“I always share their story with incoming riders. I like to be able to say to my riders, ‘Hey, look at this guy. He raced he won, or he raced he lost. But now he’s here.’ I like that the riders are able to relate to these horses,” he said.

“Maybe they’ve been through some rough patches, maybe they’ve had some struggles, but that doesn’t mean you can’t change and do something else with your life.”

Hung on the stall doors above the nameplates are each horse’s racing statistics along with a short biography. The riders can see old photos and the amount of money a horse won. His horse Funkie has a rare heart defect, and the riders can read about this too. He’s found that they enjoy learning about the horses lives before TROT and that they feel proud to ride them.

Hall’s horses aren’t incorporated into the program fresh off the track. It takes time and training to ensure they’re safe for other riders. For instance, Funkie is currently Hall’s eventing mount, but the plan is for him to move into the role of therapy horse some years down the road. When he’s ready, of course.

Hall also isn’t afraid to rescue a horse which needs a little extra care or maintenance. He works with his vets to keep his horses happily working, and is careful not to overexert them.

“I don’t mind that a lot of them come with scars or old injuries. I always show my riders like ‘this is what they’ve been through and this how we worked through it.’ For example, my horse Neo is arthritic, but they can see that he really loves what he does,” said Hall.

The goals for the future of TROT are incremental but no less ambitious. He hopes in the future his program will welcome more instructors and volunteers, but would like to keep it modestly sized so that it doesn’t lose its personal touch. He also wants to continue to use Thoroughbreds as a four-legged vehicle to help new therapeutic riders discover their love for horses and riding.

“I think Thoroughbreds are just amazing. Horses like Neo, I think they know when the riders aren’t able bodied and they take care of them. It’s really amazing to see,” he said. “They really are my niche, I think.”