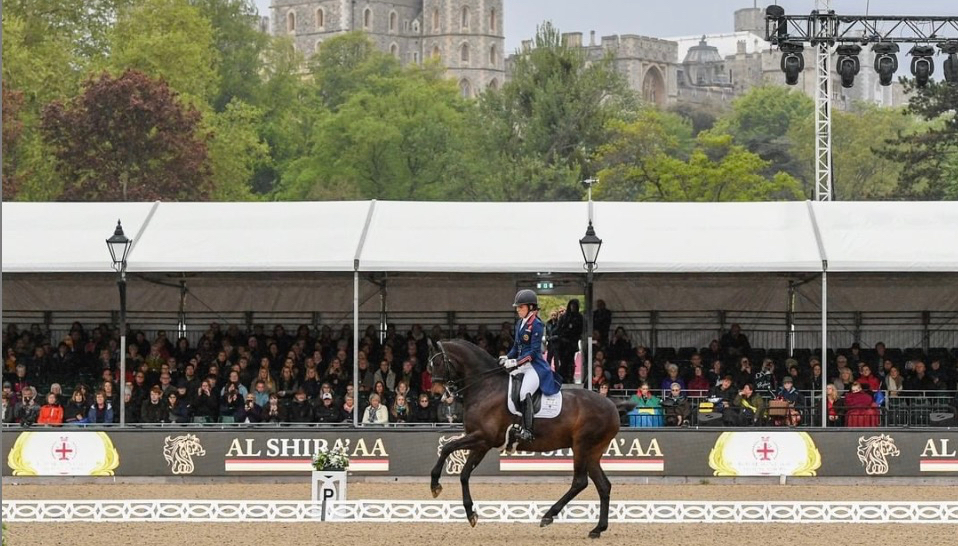 With a Charles Owen crown, and a dressage saddle as her throne, reigning dressage queen Charlotte Dujardin started her morning at Royal Windsor Horse Show meeting The Queen of England.

Then in the afternoon she performed a test up to royal standards, winning the CDI4* Al Shira’aa Grand Prix.

Dujardin is newly paired with 12-year-old Erlentanz, with RWHS being their third outing together ever. It was a shotgun show ring success, and they tallied a score of 78.087%.

“I can’t ask for any more,” she said regarding the result.

It was nearly a four point lead over Carl Hester (GBR) and his 2016 Olympic partner, the 15-year-old gelding Nip Tuck, who scored 74.304%. But for Hester it was all about the journey down the centerline.

He wrote to his Facebook, “It was nice to compete without the pressure and just enjoy the ride on my old friend Barney; who slotted into a decent second.”

The weather in Windsor might not have been agreeable, but there was no disputing Dujardin’s excitement from the day’s start to finish.

“The rain couldn’t dampen what was such a special day today at Royal Windsor Horse Show. From introducing Blueberry to Her Majesty this morning, to the lovely Erlentanz, owned by Sonnar Murray Brown, winning the Grand Prix tonight! So proud of this super horse,” Dujardin wrote to Facebook.

The win is a silver lining for Erlentanz’s owner Sonnar Murray-Brown, who has been sidelined with a broken leg.

In third was Richard Davison and 13-year-old gelding Bubblingh with a score of 72.978%.

Watch the CDI4* FEI Al Shira’aa Grand Prix Freestyle to Music today on HN LIVE! at 12:15 EDT. This week’s live stream is brought to you by Thunderbird Show Park, host of the 2019 Longines FEI Jumping Nations Cup™ of Canada. (Canada and USA only.)