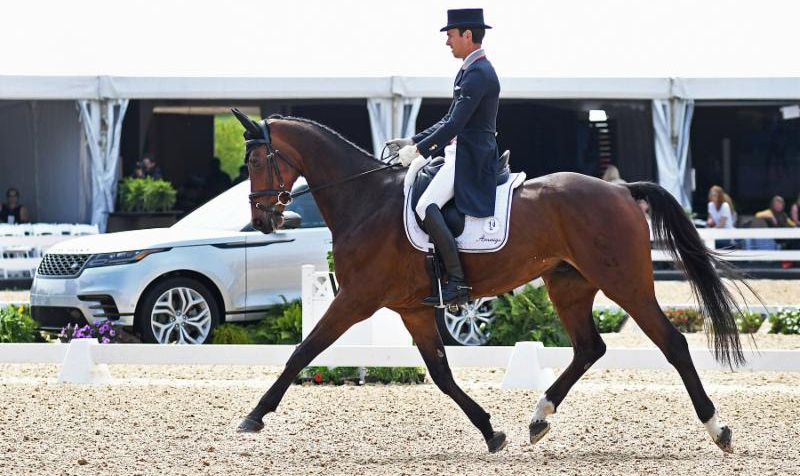 Felix Vogg was already off to a good start on Thursday when he was awarded the Dubarry of Ireland “Best Dressed Male” award.

Today, it was the dressage judges who appreciated his style. After a remarkable test with 10-year-old Westphalian gelding Colero (Captain Fire X Bonita) he was awarded a score of 28.0. Not only was it the best of the group, but a personal best for the pair.

They say “practice makes perfect” but the grade-school cliche doesn’t always ring true in the warm up arena. Vogg opted for a “work smarter not harder” routine. He put it to the ultimate FEI test 10 minutes later.

“I tried something new with him. We didn’t want him really up, I just came here 10 minutes before and that worked quite well,” revealed the 29-year-old.

“I’m quite pleased. He doesn’t take doesn’t this atmosphere too serious, with last year having been at [the World Equestrian Games], so you have to [wake him up] a little bit. I was quite lucky that Hallie [Coon] got some applause before I went in, and that wakes him up a little bit.”

Vogg is from Baden-Wurttemberg, Germany, but has spent the past year in the United States based at Boyd and Silva Martin’s farm. He entered the Kentucky Three-Day, his final event before returning home, at the urging of three-time K3DE winner Michael Jung of Germany.

“Michael Jung, my friend, (has been here a lot), and he was always really positive about it,” smiled Vogg.

Sitting immediately behind the Swiss rider on the overnight leaderboard is Elisabeth Halliday-Sharp (USA) and KWPN gelding Deniro Z. The pair scored 30.9. despite struggling with the flying changes.

“The flying changes are our biggest nemesis, and those did us in the ring. But, he pushed hard, he worked hard, he tried his guts out. I thought the mark was a bit unfair because I think he did enough good things to hopefully be in the 20’s, but that’s where we are, so I’m disappointed with the mark, but pleased with the horse,” she explained.