Harrison was also influential in show jumping as he initiated sponsorship of top events from the CN and CP railroad companies.

But his career in the railroad industry is even more legendary. Howard Green’s insightful biography Railroader: The Unfiltered Genius and Controversy of Four-Time CEO Hunter Harrison provides an intimate look at how Harrison rose from working in the railyard to CEO and the unusual, but effective, leadership style he was renown for.

Here are 10 surprising facts about Harrison from Railroader.

In his teenage years, Hunter was acquainted with Elvis Presley. Yes, that Elvis Presley. His wife, Jeannie, went to the same high school as Johnny Cash.

Hunter’s father, Tank, was demanding, to say the least, and Hunter spent much of his youth rebelling against him. His father once said of Hunter, “He’s not worth the gunpowder it would take to blow him up.” But during Hunter’s adult life, they came to friendlier ground and Hunter credits Tank with teaching him leadership skills. A photo of his father playing baseball lived on Hunter’s library shelves.

Hunter made $2 an hour in his first railyard job, which was as a carman oiler, pouring oil into the boxes at the end of the car’s axles to make sure the bearings were lubricated. “When he went to work for the railway, he found himself,” said Hunter’s sister, Mary. “Up to then, he didn’t really have purpose.”

During the early years of Hunter’s marriage (he and wife Jeannie wed in 1963), money was tight, so he had a side job walking the dogs that raced at the local Greyhound track. At one point, they had five dollars left for the week and Harrison bet all of it on two dogs after studying the track sheets intently. The dogs both won, and the Harrisons then had $87 for the week.

Hunter and Jeannie divorced in 1969 after six years of marriage. At that point, they had a daughter, Libby, who had been born when Harrison was just 19. The divorce sent Hunter into a downward spiral. He and Jeannie remarried on July 10, 1970, the date they celebrated as their anniversary for the remaining 47 years of their marriage.

At one point in the 1970s, Jeannie was making twice as much as Hunter in her work as business manager of an auto dealership company. But she didn’t have the passion for that career that Hunter did for railroading, so as his career took off, she stepped back from pursuing hers.

In the ‘70s and ‘80s, the Harrison family moved so often for Hunter’s railroad career that as Jeannie was hanging a picture in a new home in Kansas City, Hunter told her, “I wouldn’t hammer that nail,” because he’d just gotten the news they’d be moving again.

One of Hunter’s greatest legacies in the railroad world was his development of Precision Scheduled Railroading, a system for scheduling loads and trains that revolutionized the industry. A coworker, Sue Rathe, developed the algorithms that made the system work. Hunter never embraced much technology, considering cell phones and computers as necessary evils.

Hunter had to interview 19 times for his first CEO position at Illinois Central railroad. When he moved to work for IC in 1989, the company’s outlook was dismal. Their operating ratio was in the high 90s, meaning they spent more than 90 cents for every dollar they made. In two years as Vice President and Chief Operating Officer, Hunter reduced that operating ratio to 74 percent. But his forthright manner and lack of experience in finance and strategy made some doubt his fit for the CEO position. 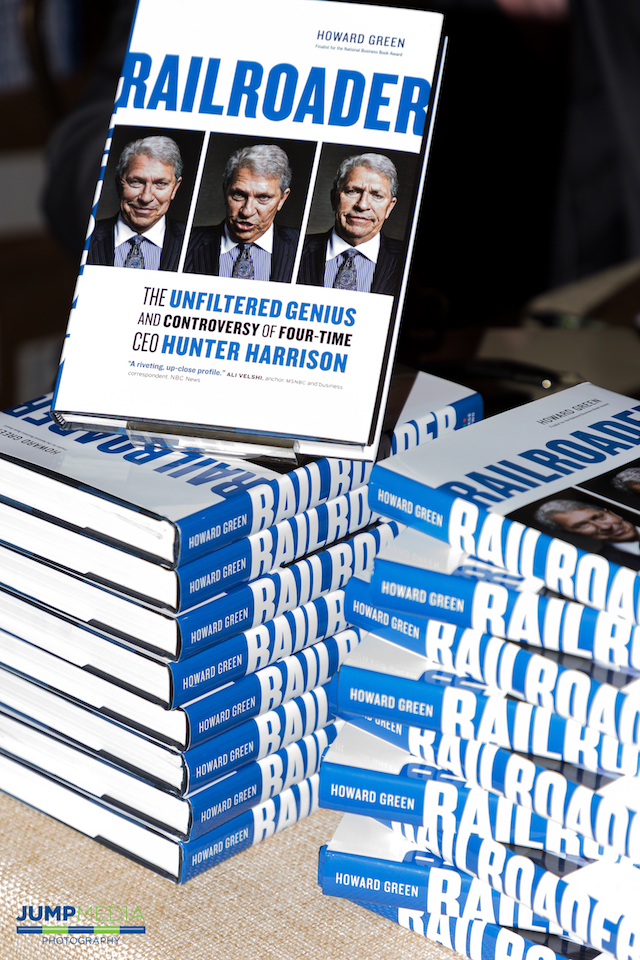 Sadly, Harrison passed away in December 2017 after complications from an illness. His legacy lives on not only in the changes he wrought in the railroad industry, but also in the influence of Double H Farm horses and riders on the show jumping world.

Read more about him in Railroader: The Unfiltered Genius and Controversy of Four-Time CEO Hunter Harrison.

More from Books and Film