Meet the 2018 Horse of the Year Nominees

Every self-respecting horse owner knows there is only one steed that deserves the 2018 Horse of the Year title—your horse.

That universal truth aside, US Equestrian has singled out these five notable athletes for the honor of their annual International and National awards, presumably to share the spotlight with your horse. (At least, that’s what you should tell him.)

Without further ado,  the US Equestrian nominees are: 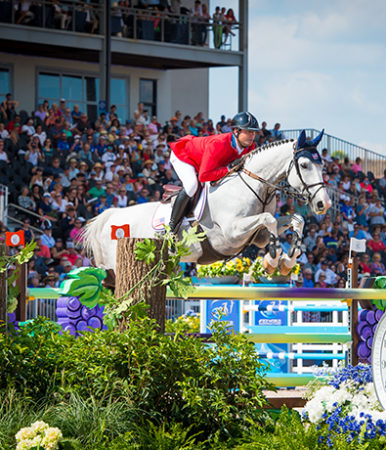 Eddie Blue’s talent was evident as soon as he entered the show ring. His stellar scope and powerful height over fences make him a “must-watch” horse on the jumping circuit. The 2009 Dutch Warmblood gelding owned by LL Show Jumpers, LLC, recorded a triumphant 2018 with his rider and trainer Devin Ryan, starting with a second-place finish in the $265,000 Longines Grand Prix CSI5* at HITS Ocala in February. They qualified for the Longines FEI World Cup™ Jumping Final in April, where they placed second overall, a major accomplishment for their first season of indoor events. The combination returned from Paris to place third in the $225,000 Sapphire Grand Prix of Devon CSI4*in May.

As the runner-up at the 2018 FEI World Cup Jumping Final, Eddie Blue and Ryan automatically landed a spot on the short list for the FEI World Equestrian Games™ Tryon 2018 NetJets® U.S. Jumping Team. During the WEG team observation period, Eddie Blue and Ryan were part of the bronze medal-winning U.S. team in the Longines FEI Jumping Nations Cup™ Poland at CSIO Sopot in June. As part of the U.S. team at CHIO Aachen, they jumped an impressive double-clear in the Mercedes-Benz Nations Cup. With only two years of FEI-level competition under his saddle, Eddie Blue found himself on his first FEI WEG NetJets U.S. Jumping Team, where he helped them win their first team gold medal since the 1986 World Championships. They ended a remarkable year by placing second in the $205,000 Longines FEI Jumping World Cup™ Toronto 2018 for the Hickstead Trophy. 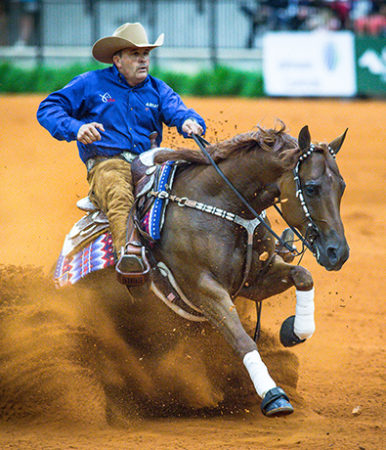 Ms Dreamy has collected a multitude of remarkable accomplishments with four different riders over her five-year career. However, nothing can compare to the results Frederick Christen’s 2010 American Quarter Horse (AQHA) mare and her current rider, Dan Huss, achieved in 2018. During the Carolina Classic Derby and FEI World Equestrian Games™ Tryon 2018 Reining Test Event held in May, Huss rode Ms Dreamy to the high score of 224. In the second phase of the competition, they scored a 226 for a 450 composite tie and moved past the tie to win the event. During the WEG, Ms Dreamy and Huss helped the U.S. Reining Team earn their fifth consecutive team gold medal while placing second individually in the team competition. They finished the WEG with the individual silver medal, making Ms Dreamy the first mare to individually medal for the U.S. Out of a field of 61 combinations in the WEG reining team competition, she was one of only 12 mares and one of only four mares in the individual competition and the only mare on the U.S. Reining Team. 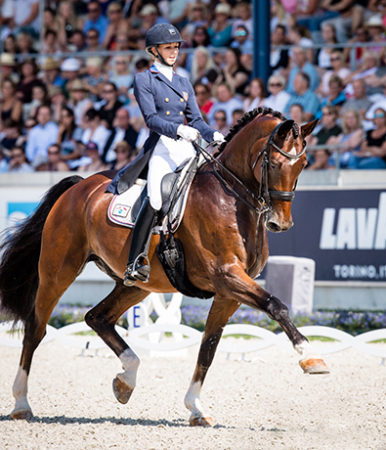 In 2018, Verdades, affectionately known as Diddy, owned by Laura Graves and Curt Maes, again proved why he is one of the best horses to grace the international dressage ring.

Following a standout 2017, when he and his lifelong rider and trainer, Laura Graves placed second in the Grand Prix and Grand Prix Freestyle at the FEI World Cup™ Dressage Final, US Equestrian named the 2002 Dutch Warmblood gelding and Graves to their second consecutive FEI World Equestrian Games™ The Dutta Corp. U.S. Dressage Team in 2018.

With the home crowd in his periphery, Verdades led Graves to an individual silver medal, the first silver medal awarded to a U.S. dressage combination at a global championship. In addition, they were the anchor combination for the silver medal-winning The Dutta Corp. U.S. Dressage Team.

During the 2018 FEI Dressage Nations Cup™ season, he helped the U.S. team earn a silver medal in the FEI Dressage Nations Cup Germany, part of CHIO Aachen. Individually, Verdades garnered eight first-place finishes in 2018, which included the Grand Prix at the FEI World Cup Dressage Final and the Grand Prix CDIO5* at CHIO Aachen. Their 2018 success allowed them to reach the world number one position on the FEI World Individual Dressage Ranking List in October, a status they held for nine straight weeks, marking the first time that a U.S. dressage combination has been ranked world number one.

Verdades began his journey to international success in 2014 after garnering attention from his reserve-champion finish at the U.S. Dressage Festival of Champions presented by The Dutta Corp. Since his launch into the spotlight, Verdades’s achievements and continued success are profound. He has earned 34 first-place finishes and over 20 second-place finishes in team and individual CDI competitions around the world since the inception of his international career. 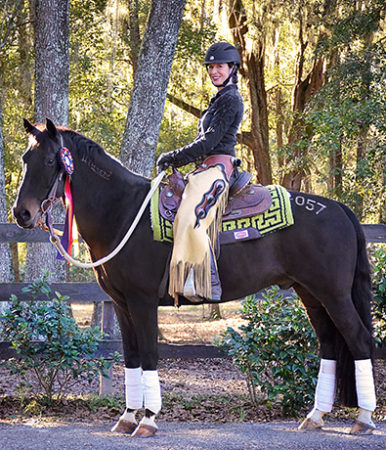 Born wild in the mountains of Nevada, Cobra was rounded up at the age of six. After the Bureau of Land Management deemed the 2004 Mustang unadoptable, a strange twist of fate paired him with his trainer and owner, Marsha Hartford-Sapp. Devoted to her vision for Cobra, she proceeded training with caution and respect for the gelding’s instincts. Soon mutual trust and admiration created a bond to carry both through the rigors of competition, and Cobra rose to the occasion, showing the nation what heart a little mustang can have. His versatility for both classical and Western dressage is apparent, as he has won national honors for both disciplines. In 2018, Cobra and Hartford-Sapp were third in the Western Dressage Association of America’s (WDAA) Western Dressage World Championship Level 4 Test 1 Open, won the Level 4 Test 3 Open, were reserve champions in the Level 3 Test 3 Open, and were reserve champions in the Western Dressage Musical Freestyle. Cobra was also the 2018 Adequan®/United States Dressage Federation All-Breeds American Mustang & Burro Association Prix St. Georges National Champion. 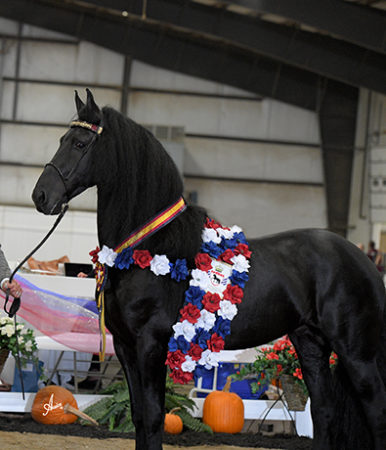 When Kirk and Sally Allgaier spotted this flashy, charismatic black Friesian stallion in Holland, they had a hunch his mind and talent under saddle and in the harness would lead to amazing things. With the help of his trainer Gareth Selwood of Lorick Stables, Karsten has been racking up wins across a variety of divisions over the years, and 2018 was no different. He placed first in 34 classes, 22 of those wins with owner Kirk Allgaier at the reins. 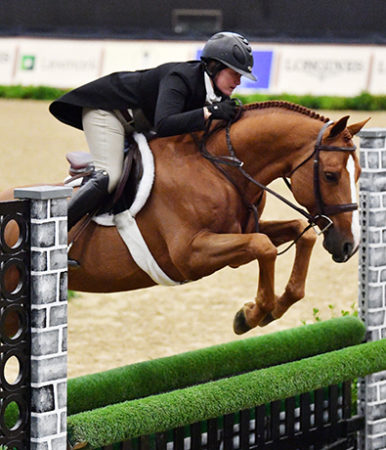 Having only begun his hunter career in 2018, Private Practice has already amassed a record that most competitors dream of achieving. The 2010 Holsteiner gelding, fondly known as Peter, started his hunter career simply by chance at the Winter Equestrian Festival in February. After one weekend showing in the junior hunter division, Tom Wright purchased him for client and successful amateur rider Dr. Brad Wolf.

Although he originally purchased Private Practice as an amateur owner hunter, Wolf made the decision to have Victoria Colvin show the gelding in the Green Hunter 3’9” section in hopes that she would put the finishing touches on him in the hunter ring. In their first week of showing, the combination quickly lit the Florida Circuit on fire, qualifying for the WCHR Peter Wetherill Palm Beach Hunter Spectacular. The pair entered the $50,000 United States Hunger Jumper Association’s International Hunter Derby at Deeridge in March and surprised all by winning the Welcome class, as well as both phases of the Derby, with Private Practice’s bravery and brilliance.

Winners are determined based on the results of online voting. Log yours at USEF.org, now through Thursday, January 3 at midnight.