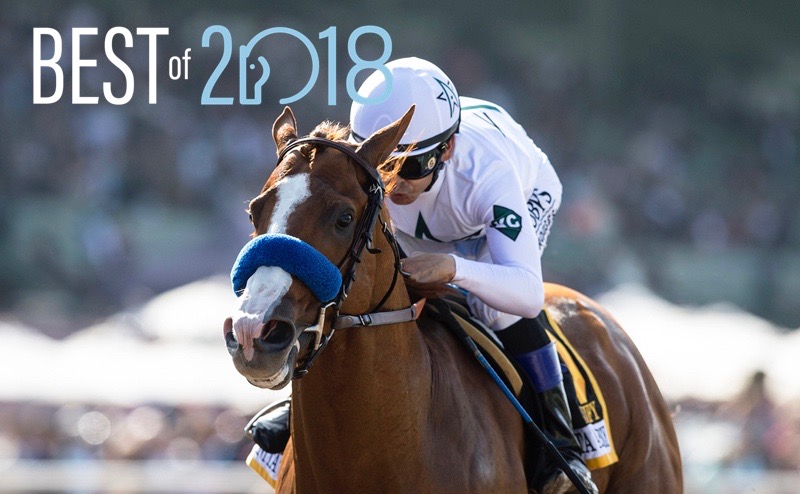 Little new information is known about the medical condition of Champion Justify following the announcement earlier this week that the 13th winner of the American Triple Crown has been taken out of training.

“Justify had some filling in his left front ankle a week ago, which subsided in a couple days,” trainer Bob Baffert said in a prepared statement. “I trained him last week and the filling came back. We want to get him checked out.”

There was no further information where or by whom the condition would be evaluated. He has been stabled at Santa Anita Park in Arcadia, California.

The scant public information has continued to drip, drip throughout the week. Baffert later announced that Justify would not run in the Haskell Invitational at Monmouth Park, New  Jersey July 29. Then came word that the son of Scat Daddy would be shipped to Baffert’s base at Del Mar Racetrack near San Diego where he would be temporarily stabled, then evaluated in two weeks’ time for the recurring condition.

Baffert launched a final blow to racing fans’ hopes when he said he “did not know” if Justify even would be ready to run in the highly anticipated Breeders’ Cup Classic November 3 at Churchill Downs, the site of his Kentucky Derby victory.

After securing the Triple Crown with his win in the Belmont June 9, connections bolstered the hope of racing fans by stating the colt would remain in training throughout 2018, with the possibility even of running in the January 26 Pegasus before going to stud. Prior to the Belmont, current co-owners Winstar Farm, China Horse Club and SF Racing inked a breeding agreement reportedly worth $75 million with John Magnier’s Coolmore Stud, though additional details have yet to be finalized or made public.

Justify had been expected to follow a path similar to that of American Pharoah. That would have included the Haskell, then possibly the Pacific Classic at Del Mar August 18 or the Travers Stakes August 25 at Saratoga or the Pennsylvania Derby September 22 at Parx Racing, outside Philadelphia, then the Breeders’ Cup Classic. The over $12 million Pegasus, the world’s richest single race, could be a final appearance.

Insurance considerations may figure into a decision whether the horse ever runs again. A typical equine insurance policy tends to cover mortality, not medical conditions, and costs four to seven percent of the insured amount, according to insurance analyst Matthew Delehanty of Louisville’s Lavin Insurance. Delehanty added that coverage could “be readily available” for medical conditions that prevent a horse from the required live covering of mares in stud. That would mean a premium of $3 million to over $5 million.

Ankle filling is a condition in which fluid engorges soft tissue. Though generally a temporary condition associated with the strain a horse can undergo during training or racing, filling can occur at any time and for many reasons from simple walking or an awkward step. It can be a sign of a more serious condition like ankle bursitis, an inflammation of the bursa, a fluid-filled sac surrounding the ankle joint that serves as a cushion between the bone and tendon.