Arthur and Helen: Lessons About Love (From Horses)

Home > Blog > Stories from the Heart > Arthur and Helen: Lessons About Love (From Horses) 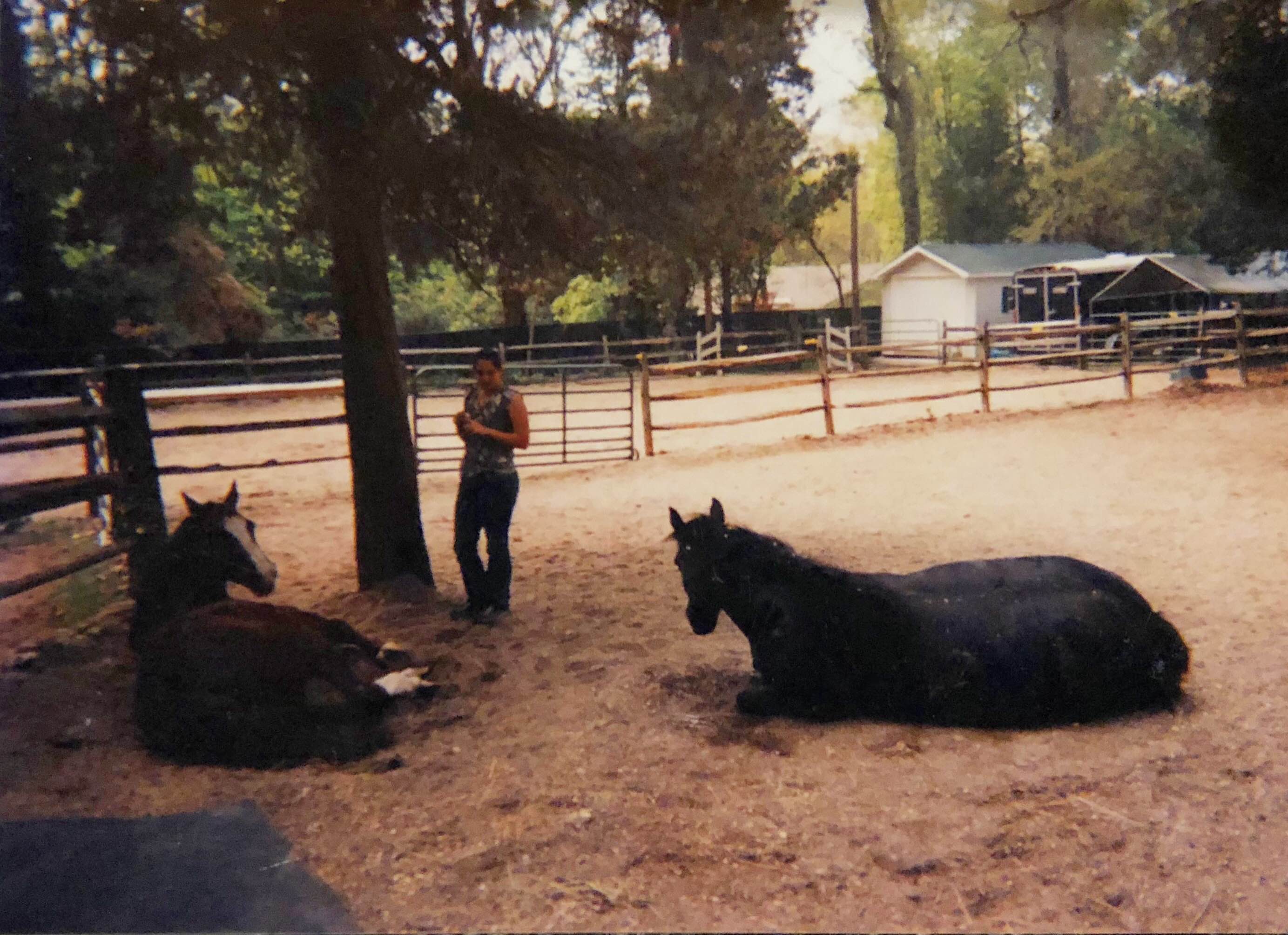 Arthur and Helen were my parents.

They lived good long lives and both passed in their eighties about six months apart. They were good parents, and we had little money but were well raised. Neither one ever displayed much open affection, either to us or to each other, at least to my then uneducated eye.

In the two years before his death my father Arthur was very sick, bedridden for most of the time, and my mother, Helen, was his caregiver. He would lie in bed, and she would see to his every need. When he didn’t specifically request something, she would stand by the bed, rearranging the pill cups and magazines at his bedside, anxiously awaiting the next set of orders.

Arthur could only take so much of this, and when he reached his limit, he would turn toward her, frown, and dismiss her with a wave of his hand. She would quickly retreat to the kitchen, and then ease back in over the next couple of minutes and return to her station at the bedside. 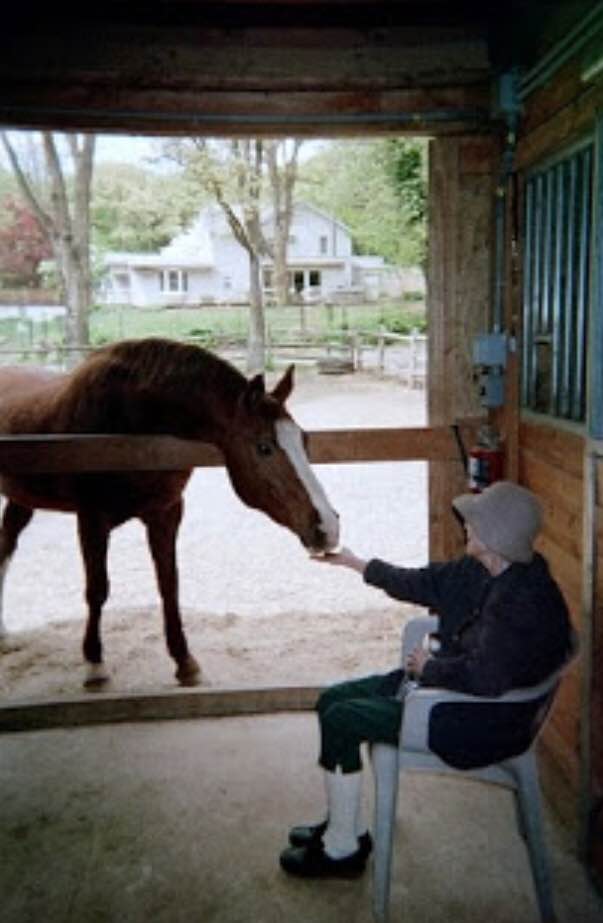 I began my riding “career” as an adult. After my parents died, my first horse, Buddy, got very sick for two years. He had gotten Lyme disease, foundered badly, and a host of other complications ensued. It took time to diagnose and treat the problem and the subsequent complications.

During this time, more often than not, he would be lying in the paddock on his side, with Magic, our mare, standing next to him. Normally only barely tolerant of the gelding, Magic stood watch over Buddy for an entire year.

Buddy was always a friendly sort, but he can take only so much doting. Magic would lightly nuzzle his neck, and use her nose to push small bits of hay toward his mouth. When Buddy had enough of the fussing, he would turn toward her and pin his ears slightly. This would, of course, send Magic running to the other end of the paddock, where she would hang back, observe for a minute or two, and discretely make it back by his side. 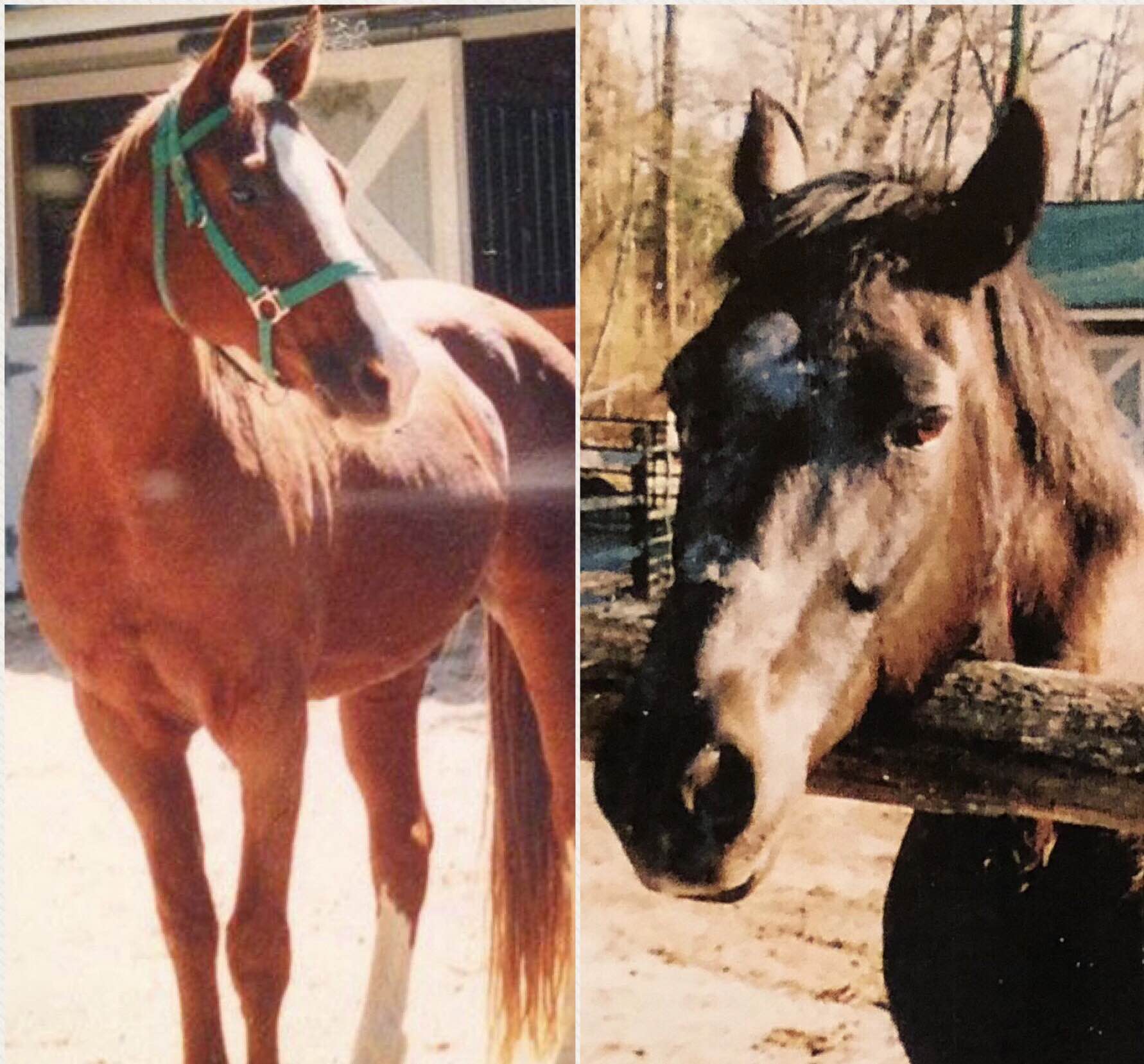 The first horses at our farm, Buddy and Magic. They were like two bookends; it was hard to think about one without the other.

Over that year as I sat by my window, I observed the love they had for each other. Though unspoken and unheralded, it was obvious.

I had to travel a long, long road to get to the point where I had horses outside my window to observe their quiet devotion to each other and put aside my faint regret of never hearing the word love spoken by Arthur and Helen. At middle age, I learned that words are really not needed for communication. Horses know that. They taught me.

After about two years, Buddy slowly regained a good deal of his mobility, the spark in his eye, his nicker, and his supposed indifference toward Magic. One November day, Magic went uncharacteristically off her feed. At dinnertime, she went out into the paddock and lied down. This was so out of character that we immediately got her up, began walking her, and called the vet. 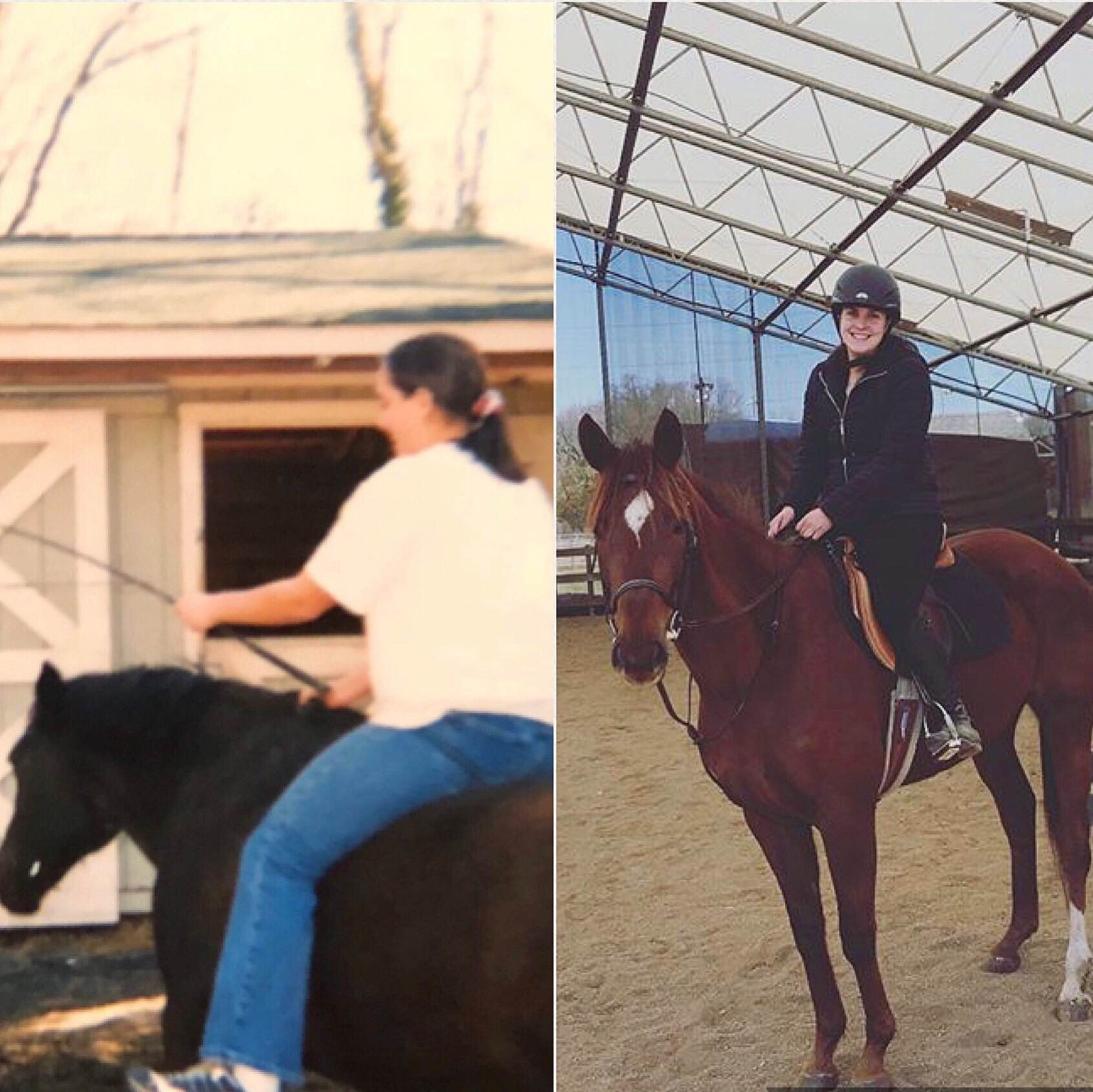 Samantha, now a sought-after instructor and re-trainer of OTTBs, then as a playful youngster encouraging Magic with a carrot on a string.

We worked around the clock for several days with our veterinarian. A point came where his eyes told me we had to make a decision.

That night, I tried to sleep, but it wouldn’t come. I moved from the bed to the floor and back, trying to find comfort. Mickey, Sam’s Golden Retriever, sensing my despair, just wrapped himself around me in unspoken consolation.

Morning came and I was hoping it was a dream, but it wasn’t. It was Thanksgiving eve, the day I had to play God with my friend’s life. The logistics of doing what needed to be done kept me busy for hours, until one o’clock when the vet was to come. I took the horse trailer and parked it next to Buddy’s paddock. I cleaned the interior and put down fresh bedding. I had rehearsed this in my mind all last night and it seemed surreal to be actually doing it.

I heard the vet’s car on the farm driveway and I put a halter and lead on Magic, and led her onto the trailer. The vet prepared the syringes that would take our mare from her pain. Magic was about 20 feet from Buddy; their eyes locked through the openings in the trailer. As first one, then the second syringe took effect, Buddy let out a loud nicker, and then I was holding Magic’s head, cradling it for what seemed like an eternity.

When I got up, I went and got Buddy and walked him to the back of the trailer to see his friend. He seemed indifferent. I walked him back to the barn, and he went into Magic’s stall. Her blanket was draped over the stall chain and he buried his muzzle in it. He backed up and licked the lead ropes that hung from the ceiling where she had stood getting her IV’s. Then he walked out of the stall and didn’t go back in.

I drove away with Magic’s body in the trailer to be cremated, which Sam and I had agreed on so that we could sprinkle her ashes at some of her favorite places. Buddy was always very calm, and he seemed more so than usual, but I wasn’t prepared for what happened as I drove out the driveway.

Buddy reared up, and with a snort and a cry charged around at full speed, tearing up the paddock. He spun around at the fence close to us, and kicked the top fence rail out with both hind legs, sending the rail flying in splinters. He had never acted like this before, ever. Then, he stood still, head high and still snorting, before slowly relaxing his neck and beginning to graze in his hay.

He had grieved, and now his grieving was done. 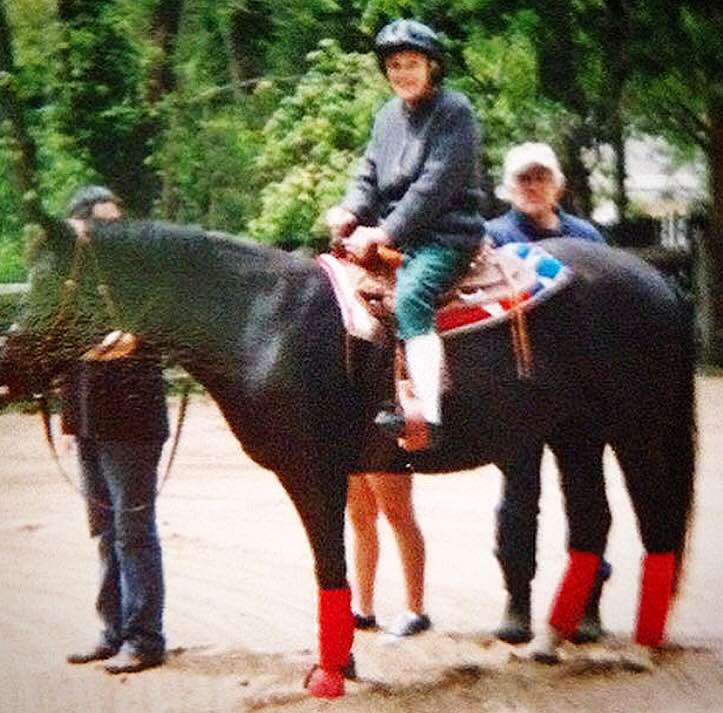 Mom Gumbrecht riding Magic at age 84 with the author behind her.

As I brought Magic’s body on the 40 minute trip to be returned to ashes, the choking tears subsided and an incredible sense of calm came over me. I was all right with it, with her, and with God. Euthanasia, it is said, is taking the animal’s pain and making it your own. That’s a fair exchange for all she gave us.

Given time, the sting of Magic’s loss has been removed, replaced with the wonderful memories of a once in-a-lifetime horse.

Buddy lived happily for seven more years, teaching our young ones how to be horses. He died in his sleep in 2011.

Buddy and Magic taught me to not long for what was already there. That love need not necessarily be spoken to be true. That the truest love needs no words; and that what I thought I was missing, I had all along.