Sixteenth Time’s the Charm for Melissa Taylor and Ansgar 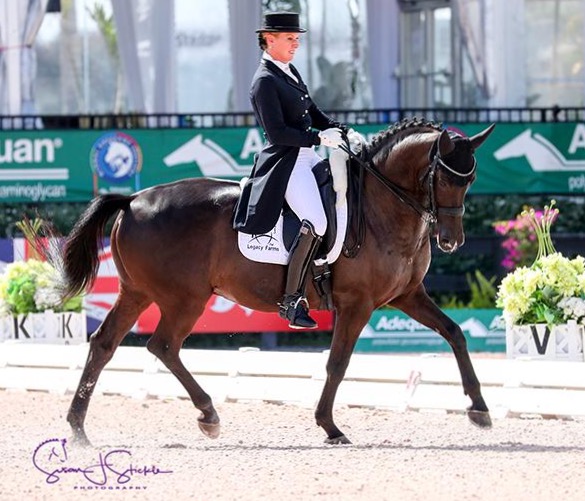 Melissa Taylor (USA) and Ansgar were this week’s lesson in perseverance. After 16 previous attempts, the pair captured their first victory on opening day of the final week of the winter dressage circuit in Wellington, FL, with the Prix St Georges CDI3*.

“I’m pretty excited about this,” said an enthused Taylor. “I’m thrilled with Ansgar, but most excited for the owner because she’s an adult amateur who has put a lot of money into the sport and it’s finally giving her some results. Also she had a surgery on her hip recently, so she was here to watch on crutches. She’s elated—and she’s been through a lot.”

Taylor took over the ride on Ansgar two seasons ago and confessed she wasn’t an early fan of the combination.

“When Nicole first gave me the ride, I wanted to sell him,” she said. “She can’t ride him; he’s way too hot and way too sensitive for an adult amateur to handle, but then one day she asked if I wanted to try showing him.”

The pair have been on a learning curve in the 20×60 ever since.

“Last year he still had his own agenda and still tried to get away with certain things in the test—he had beautiful pirouettes at home but thought that he didn’t have to do them in the ring—and he was a little bit rude in there,” said Taylor, who is married to Danish Olympian Lars Petersen.

“It was a question of retraining, and Lars has always said that retraining a horse is more difficult than training your own horse up. I never really understood that until I tried to compete this one. It was quite the procedure.”

Now in their second full season in the small tour, Taylor feels Ansgar is is finally trusting her in the show ring—but she doesn’t always trust that what she feels is what the judges see.

“He’s a little horse—with a lot of movement—but it’s not always movement through the back. So even when I feel like I have a great ride, sometimes the judges say—correctly—that he’s too tight in the back. So I wasn’t really sure if I’d nailed the test or not. But the two plus-71s made me realize I’d done okay,” she explained.

Taylor hopes to take Ansgar to the grand prix this season.

“I need to talk to Nicole, but I’d love to be able to take him to the national championships and we’re trying to work the grand prix stuff, but Ansgar is hot as a tamale, so I’m not sure if I can ever get him to stand still enough for 15 steps of piaffe,” concluded Taylor. “But we’ll see in the next couple of months and then make a plan.”