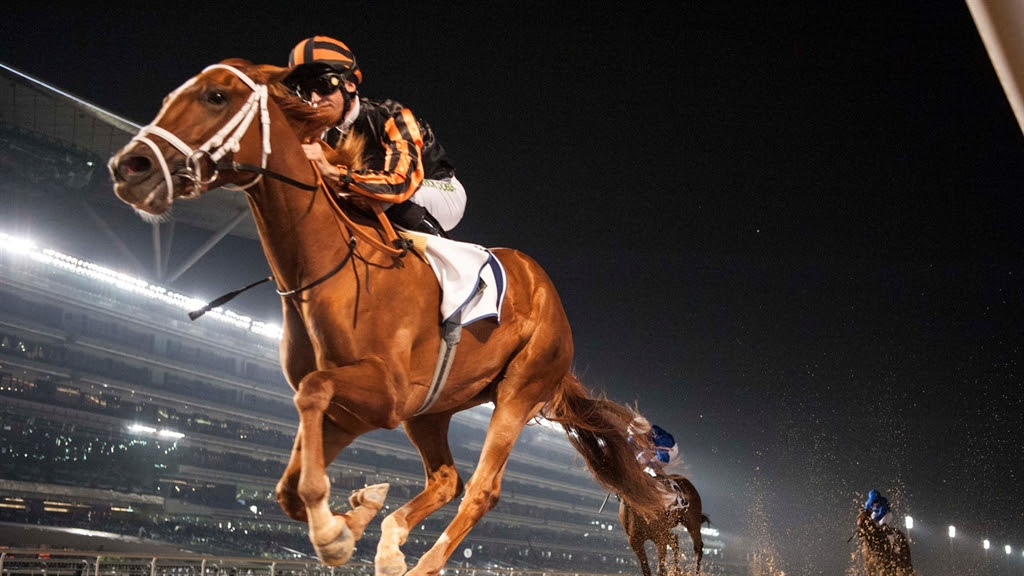 Godolphin’s Winter Lightning was expected to run away with the featured 1 1/8-miles UAE Oaks for fillies Thursday at Meydan. But there is a reason they run the race and Doug Watson-trained Rayya proved that with a shockingly easy 3-3/4 win over French runner Expressly in the $250,000 Group 3 contest, with Winter Lightning never bolting and finishing another 4 1/4 lengths further and a mere nose ahead of Sa’Ada in the small six-horse field.

Rayya gained two measures of revenge on favored Winter Lightning after losing to her in both the listed UAE 1000 Guineas and the UAE 1000 Guineas trial, her only two losses in four starts this Carnival season.

“She was a lot more relaxed today than last time when we never really knew what upset her,” winning jockey Pat Dobbs said of Rayya. “Halfway down the back straight I knew she was going to be very hard to beat.”

“I imagine we’ll have to look at the UAE Derby, but we’ll enjoy this first,” said Watson after the race.

His most recent filly star, Polar River, was undefeated when she went up against the boys in the UAE Derby two years ago. She lost a heartbreaker to Lani, the zany Japanese fan favorite who went on to compete in the Kentucky Derby and finish third in the Belmont Stakes before retiring to stud earlier this year.

“The Kentucky Oaks would also be a goal,” said Watson, perhaps with a tinge of regret from an earlier decision. Polar River had been invited to the 2016 Kentucky Oaks, run on Friday before the Kentucky Derby, but Watson chose not to ship and run her because of the anticipated presence of the immensely talented and then undefeated Songbird, whose connections subsequently withdrew her from the race when she spiked a fever.

The UAE Oaks result would have been enough of a head scratcher had it not been for the evening’s following race as world-class long-distance pacer and last year’s Dubai World Cup day Group 1 UAE Gold Cup-winner Vazirabad returned to the Meydan grass only to come up 1 3/4 lengths short to Rare Rythm in the Group 3 Nad al Sheeba Trophy over 1 3/4 lengths of turf with veteran Sheikhzayedroad on another highway altogether by 7 3/4 lengths.

“That was very impressive but I was mindful that I did not want to give him too hard a race,” said pilot, William Buick.

Buick was mindful of saving the winner for good reason. Trainer Charlie Appleby had been contemplating a trip to Australia with the horse, but added after the win that “the connections all agree we should stay here for the Dubai Gold Cup. Hopefully he will be very competitive on the big night.”

A decade ago, current American super-sire Curlin added the Dubai World Cup to his trophy case and, in the race named after him, Saltarin Dubai ventured from Argentina to claim the 1-1/4-miles listed dirt handicap by a Curlin-like five lengths over Godolphin’s Don’t Give Up with Etijaah another 2-3/4 lengths behind.

Godolphin runners enjoyed more success on the evening as Zaman with William Buick again at the helm put the royal blue 1 1/2 lengths in front of Waqqad with Freescape another 3 1/4 lengths captive in the eight-furlong listed turf contest.

The hometown stable had earlier scored with Top Score 3/4 of a length better than The Grape Escape escaping by a short head over Oh This Is Us.

The card opened with Ziyadd claiming a 2 3/4-lengths advantage over Barnamaj while Paddy’s Day didn’t have his best day but rallied to gain third over 1 1/4 miles of dirt in the Al Maktoum Challenge 3 for Group 1 Purebred Arabians.

Kidmenever didn’t in the closing 1-1/4-miles turf handicap taking a 2 1/2-lengths win off into the Dubai night. Banksea added a bit more to his bank finishing another two lengths off.

Super Saturday concludes the Carnival season and sets the stage as the dress rehearsal for Dubai World Cup day March 31. Five Group races give the card its namesake. The most anticipated will be the Group 1 Al Maktoum Challenge Round 3 where Thunder Snow will headline for Godolphin while Heavy Metal, North American and Special Fighter will give chase. Whiskey Baron will tipple off the plane from Australia to test the Meydan turf in the nine-furlong Group 1 Jebel Hatta. Hawkbill is billed as the frontrunner in the 12-furlong Group 2 turf test. In a pair of Group 3 events, Comicas will try to keep a straight face pointed to the finish line in a six-furlong dirt scamper with Ertijaal testing the same distance for Ireland on the green in the evening’s closer.