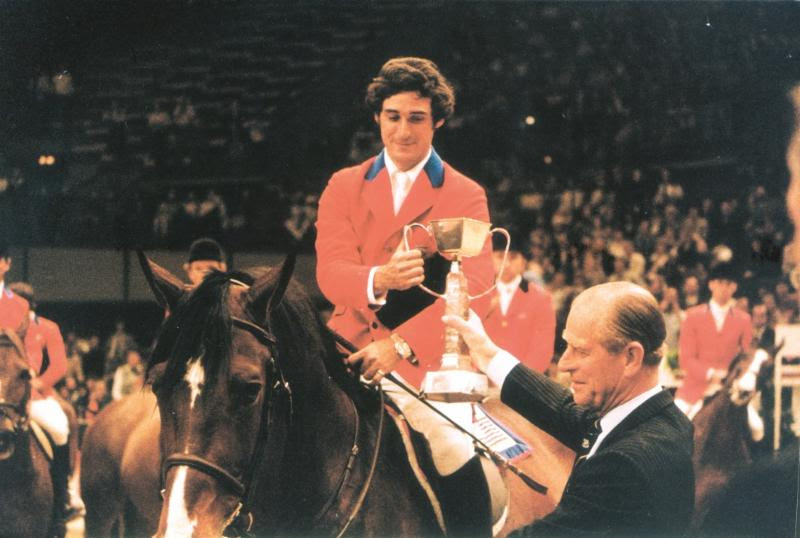 Jumper jockey Norman Dello Joio and patron Hunter Harrison along with horses Authentic and Sympatico are getting their well earned place in the history as the 2018 electees to the Show Jumping Hall of Fame.

The honor is “bestowed annually upon select individuals whose contributions to the sport have set them apart and whose influence has had a significant impact on the sport of show jumping and the equestrian community.”

Here’s the round up from the press release:

Norman Dello Joio achieved great success at home and abroad over his three-decade riding career. Winner of virtually every major Grand Prix in the U.S., he is best known for two international titles – the 1983 FEI World Cup Final in Vienna, Austria, which he won aboard the French stallion I Love You; and the Olympic individual Bronze Medal at the 1992 Barcelona Olympic Games which he won riding Irish.

Nicknamed “Stormin’ Norman” for his aggressive riding style, Dello Joio started winning on the U.S. Grand Prix circuit in the 1970s. His record included such wins as the Grand Prix of Devon (two years in succession), the President’s Cup, USGPL Invitational, and the American Invitational which he first won on Allegro in 1978. (He added a second Invitational win in 2004 on Glasgow.) He established an American Grandprix Association (AGA) record when he rode Johnny’s Pocket to five wins in 1981.

In 2000, Dello Joio rode Glasgow to three victories in his first four starts at the Winter Equestrian Festival in Wellington and then placed second in the International Grand Prix at the Spruce Meadows Masters before winning the President’s Cup for a second time.

Dello Joio’s record in international competition is equally impressive. In 1979, he finished third in the first FEI World Cup Final ever held and rode Allegro as part of the United States’ Gold Medal team at the Pan American Games in San Juan, Puerto Rico. In 1980, he was named to the U.S. Olympic Team, although the U.S. boycott denied him the chance to compete. When he finished second in the 1984 World Cup Final, it marked his third top-three finish in the Final’s first six years.

Riding into his third decade, Dello Joio and Glasgow won the King George V Gold Cup at Hickstead, England in 2001, the same year he placed third in the Kerrygold Classic at CSIO Dublin in Ireland. The following year he won the World Cup Grand Prix at Spruce Meadows and Oslo, Norway. Dello Joio has also served as chef d’equipe for U.S. Nations’ Cup teams and for the Mexican teams at the 2008 Olympics and 2010 World Equestrian Games.

Dello Joio and his wife, Jeannie, have a daughter, Daniela, and a son, Nicholas, who has followed in his father’s footsteps as a successful Grand Prix rider. 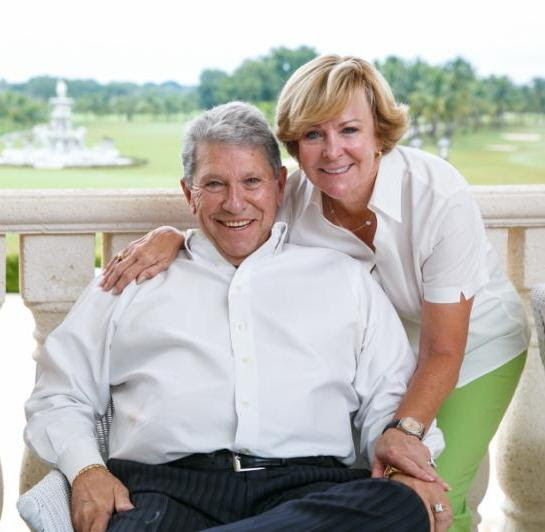 Hunter Harrison was a prominent and influential figure in the world of international showjumping. He was extraordinarily dedicated to the sport as a sponsor, owner, business advisor and avid supporter for many years. Harrison supported some of the sport’s top riders and his Double H Farm has owned and produced some of the best horses in the sport.

One of the most highly regarded executives in railway history, Harrison brought support of companies he led to the sport as some of show jumping’s most important sponsors. Under his leadership, railway giants CN and CP have provided support to major events like the Spruce Meadows Masters, National Horse Show, World Cup Finals, North American Junior and Young Riders Championships, Winter Equestrian Festival and Palm Beach Masters. Harrison also provided personal support and gave of his time to help lead many events including the National Horse Show (which he served as Chairman of the Board), Spruce Meadows Masters, American Gold Cup, Global Champions Tour and Winter Equestrian Festival.

Harrison also played a major role as a horse owner and supporter of top riders. In addition to his daughter Cayce, who won the individual Gold medal at the North American Junior and Young Riders Championships in 2002, he supported McLain Ward, who won Olympic gold and silver medals and the 2017 FEI World Cup™ Finals with HH horses; international stars Rodrigo Pessoa of Brazil and Daniel Duesser of Germany; and Cayce’s husband, Quentin Judge, who has also achieved international success for the U.S.

Some of Double H’s top horses include the chestnut mare Sapphire who won Olympic team Gold medals with McLain Ward in the saddle at the 2004 Athens and 2008 Hong Kong Olympics Games, and HH Azur, with whom Ward won team Silver at the 2016 Rio Olympics as well as topping the 2017 FEI World Cup™ Final in Omaha. Other top Double H horses shown successfully by Ward include HH Carlos Z, HH Callas, HH Ashley and HH Gigi’s Girl. 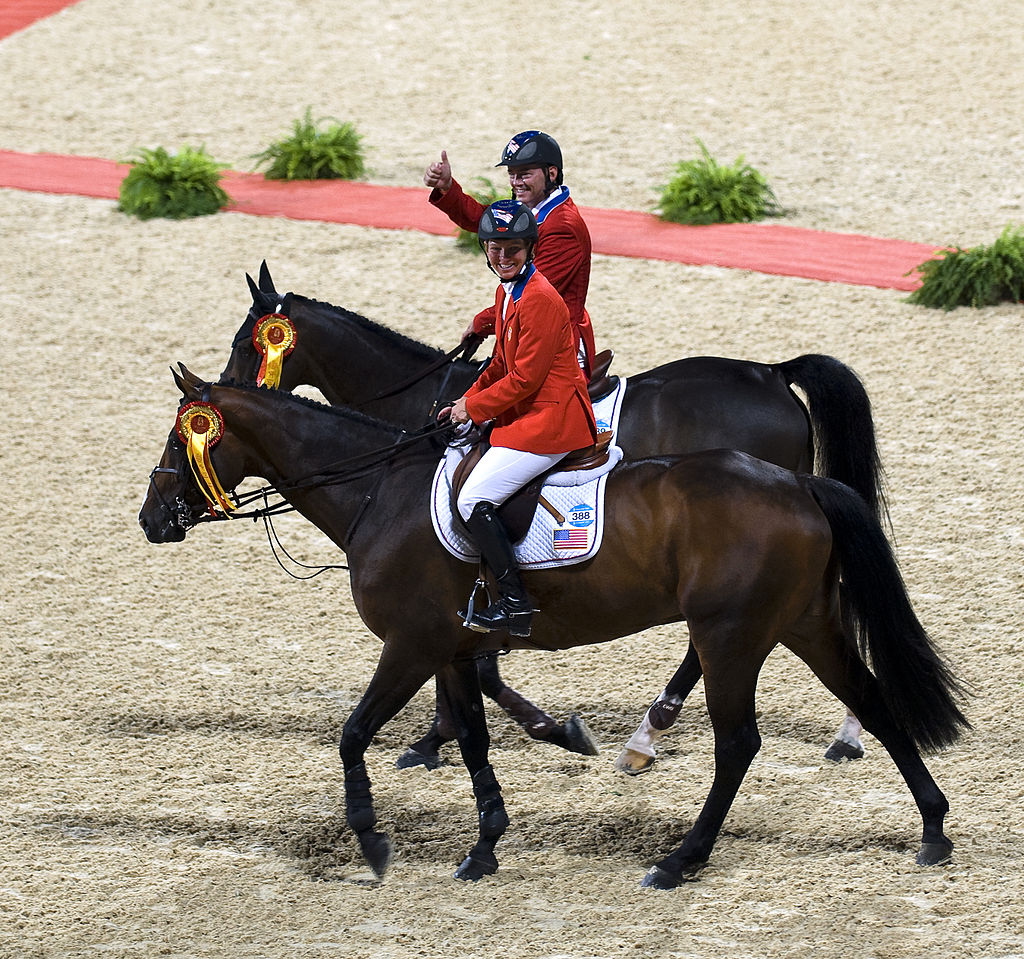 Authentic, a bay Dutch Warmblood gelding, teamed with Beezie Madden for one of the most successful careers in U.S. show jumping history. Their long list of accomplishments includes three Olympic medals – team Gold at both the 2004 Games in Athens and 2008 Games in Hong Kong where they also claimed the individual Bronze – plus double Silver medals at the 2006 FEI World Equestrian Games™ in Aachen.

Authentic was purchased by John and Beezie Madden together with Elizabeth Busch Burke as a six-year-old in 2000 (it was because of the connection with Budweiser that he got his nickname “Bud”). To help keep him as Beezie’s ride for Athens, shares were later sold to Mr. and Mrs. Joseph Patton, Mr. and Mrs. Steffen Wolff, Mr. and Mrs. Jeremy Jacobs, and Chandi Duke Heffner. After Athens, Abigail Wexner purchased him, ensuring that one of the world’s top combinations would stay together.

Other highlights included second place in the $200,000 Queen Elizabeth II Cup at Spruce Meadows (2009), second place at the Budweiser American Invitational (2004) and third place in the Hachenburg Grand Prix in Germany (2004). In 2004, Authentic and Madden helped the U.S. to second place finishes in the Nations Cups at Aachen, Germany, and Spruce Meadows, Canada and in 2005, they helped the U.S. win the Nations Cup at Aachen and its first-ever Super League Nations Cup competition. Authentic was named the USEF Show Jumping Horse of the Year in 2005 and again in 2006 when he was also the overall USEF Horse of the Year and Madden was honored as the USEF Equestrian of the Year.

Above all, it was Authentic’s stellar performances in show jumping’s most important events that etched his name indelibly in the sport’s record books. At the 2006 World Equestrian Games, Authentic was perfect, winning the opening speed class, turning in the U.S.’s only double clear in the Nations Cup and then going clean with all four riders in the individual final. Authentic then carried Madden to their second team Gold together at the 2008 Olympics and won an exciting seven-horse jump-off for the individual Bronze medal.
Authentic was formally retired from competition in 2009 in a ceremony at the New Albany Classic and he is now happily retired at the Maddens’ farm in Cazenovia, NY.

Sympatico, a veteran of the 1976 Olympics and 1978 World Championships, is best known for his show record in the Puissance. Sired by The Hammer out of a Black Gang mare, Sympatico was in training as a timber horse when purchased as a 3-year-old by the Edelmans’ Alligator Farms in Connecticut. Sally Edelman showed the 17.1h, bay, Thoroughbred gelding sparingly as an equitation horse before starting the 6-year-old on the A circuit as a junior jumper in 1971 while riding out of Carl Knee’s Rock Bottom Farm.

Sympatico moved up to the open division with Anthony D’Ambrosio in 1972 and the duo claimed a second-place finish in the Cleveland Grand Prix, a fourth in the Grand Prix of Los Angeles, a win in the Orange Coast Grand Prix in California, and four wins at the National Horse Show in Madison Square Garden. His record setting career as a Puissance horse began in 1973 when he won the Puissance at the National Horse Show with a height of 7’4″. The next year he won the Puissance at the Washington International Horse Show at 7’1″ and the Grand Prix at Hamilton (Ontario), while placing second in the American Show Jumping Championships and Grand Prix of Toronto and third in the American Gold Cup.

Wins the following year at Washington and New York, as well as in the Grand Prix at Hornby (Ontario), led to his sale to Samson Farms of Canada and new success as a team horse for Canada. In 1976, Canadian Jim Day rode him to Grand Prix wins at Aurora (Ontario) and Toronto, and he won three classes at the Royal Winter Fair including the Puissance, in which he cleared 7’2″. His 1976 season was highlighted by his selection to the Canadian team for the Montreal Olympics where he led the team to a fifth-place finish.

At the end of 1977, he was purchased by Canadian rider Terry Leibel who teamed with him to win the Grand Prix of Florida in their first start together and also the Grand Prix of Rotterdam during 1978, a year that saw them help Canada to a fourth place finish in the World Championships at Aachen.

The new inductees will be honored at the Show Jumping Hall of Fame’s annual induction ceremony at the Devon Horse Show on Thursday, May 31, before the start of the Sapphire Grand Prix of Devon.