Laura Graves’ new freestyle is almost as amazing as her original one. And she wasn’t even trying yet.

The 30-year-old and her Rio Olympics partner, Verdades, debuted a new canter tour in the Grand Prix Freestyle CDI5* week five of the Adequan® Global Dressage Festival (AGDF) in Wellington, FL. And by “new,” she means she’s barely practiced it.

“I had only actually ridden through it once at home, and that was for Terry Gallo to get the timing [for the music], so I need to do my homework a little better,” admitted the Olympic team bronze medalist.

The new floorplan is a departure from the tempis on a curve we’ve seen in freestyles past with the dynamic duo.

“We’ve actually taken away a bit of risk as the changes aren’t off a curved line, because you actually don’t gain as many points as you do for doubling up on the pirouettes, so it ended up being a little bit of a math equation,” explained Graves.

But even without that awe-inspiring move, they remain, well, awe-inspiring. The so-new-we-haven’t-actually-ridden-it freestyle scored 84.375% for Graves and Verdades on Friday night—just 0.3% lower than their winning score at the CDIW* AGDF show two weeks ago.

Because even when she’s making it up just before she goes, Graves is a phenom.

“Big thanks to Terry Gallo who always steps in when I have a last minute ‘great’ idea. I couldn’t do it without her and I was super pleased with how the music turned out. We have a couple of little tweaks to work on before our next performance at Global,” added the Florida-based rider. 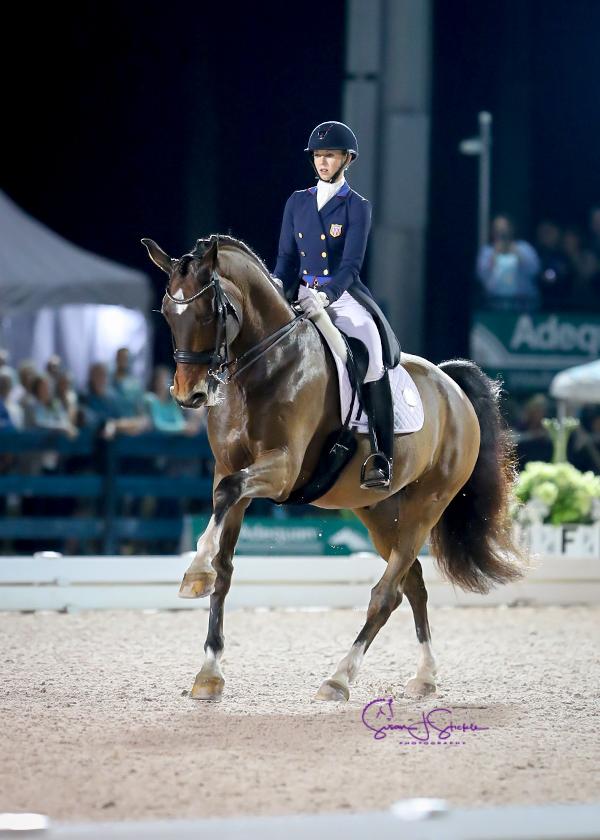 We’d show you their winning ride, but the AGDF doesn’t offer an embed feature, which doesn’t make us sad at all. *Wipes tears from screen* Click here to watch it in full.

Side note: Can we take a moment to appreciate how loyal dressage fans are? Check out the full stands!