Irish Runners Take to the Turf in Dubai 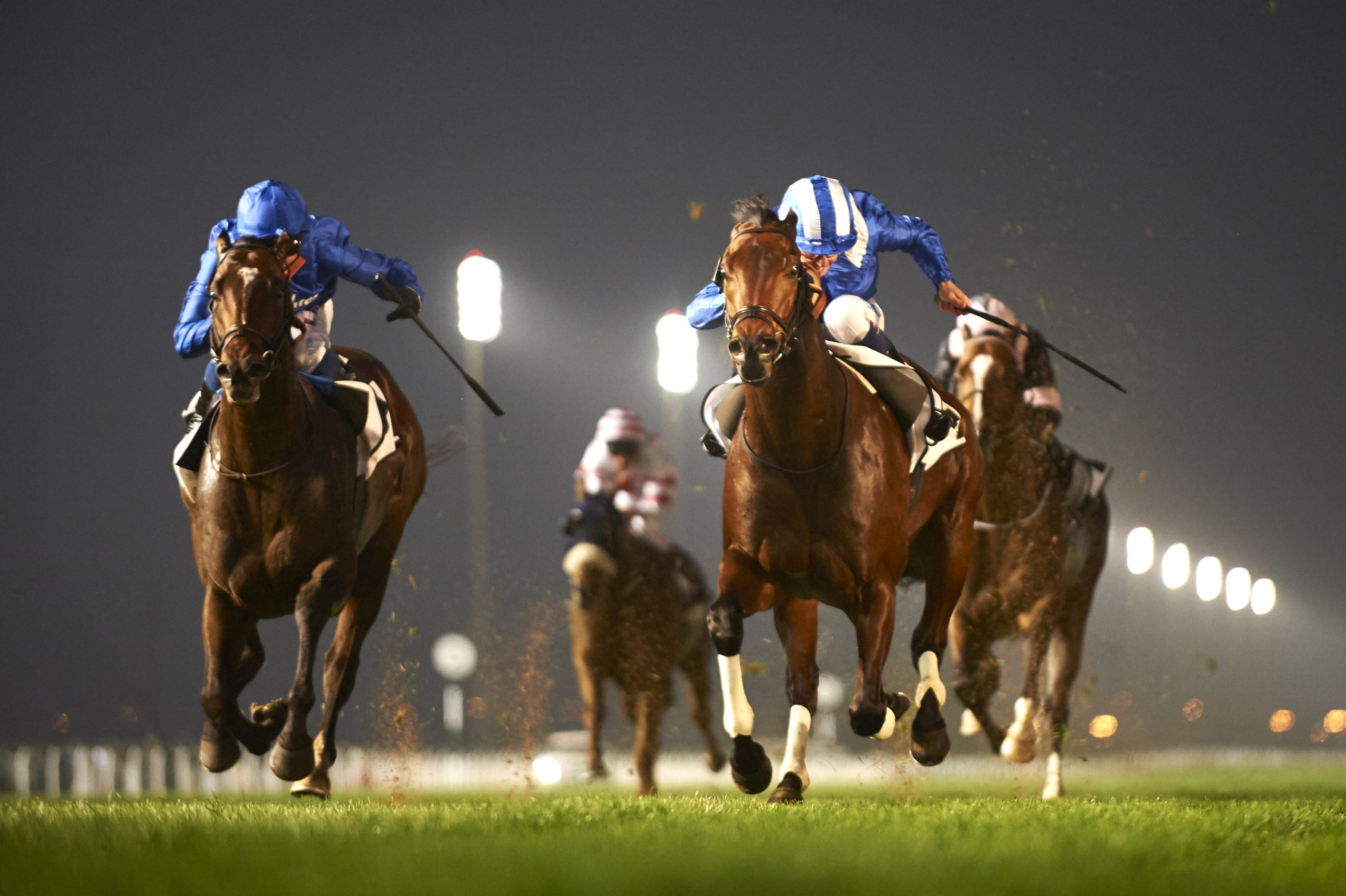 We’re still a few weeks away from St. Patrick’s Day, but Thursday was the “greenest” night so far this year at Meydan, with three group turf features and the highest purses to date in this year’s Dubai World Cup Carnival.

Irish runners were fittingly one-two in the opener as Ertijaal and rider Jim Crowley managed a wee head over Godolphin’s Blue Point in the 5 furlong Group 2 Meydan Sprint, while Hit The Bid running for Great Britain didn’t, another 3 1/4 lengths back.

The runner-up and William Buick seemed to hold the advantage until the final furlong when the winner powered back to gain a final advantage.

“He actually missed the break a little bit,” said Crowley. “We know Blue Point is a very good sprinter and would be staying on, but I also knew my horse would be up to the pressure when we challenged.”

Last year’s top-rated horse in the UAE and son of Oasis Dream has now found the oasis at this distance in six of his seven starts Meydan. He set the track record last year and lost only to Australian star Buffering in the Al Quoz Sprint on World Cup Day in 2016.

Great Britain and Godolphin got a measure of revenge in the 1 1/4-mile Group 3 Dubai Millennium Stakes as Folkswood put a short head out in front of stablemate Leshlaa, while Earnshaw could earn only a third, another 1 3/4 lengths short.

“His last run was in Australia was in November, so he really deserves a lot of credit,” said winning jockey Buick. “We were in trouble with nowhere to go, but when the gap opened, he really picked up.”

South Africa raised the flag for trainer Mike de Kock in the Group 2 featured Zabeel Mile with Janoobi denying Championship the same by 3/4 of a mile with the winner’s stablemate Noah From Goa nowhere by a length.

That gave Crowley a double on the evening riding for two far-flung countries and stables. “I had planned to lead but Championship was able to get to the front,” explained Crowley of his strategy. “I was conscious to switch out from the rail because I did not want to be stuck behind him.”

The runner-up had no complaints. “We drew the 10 gate and he likes to be a frontrunner,” said rider Silvestre De Sousa. “I had to move him early to come across. He ran a good race. It was only his second time out in the Carnival and he’s not 100 percent, so it was a big performance for him tonight.”

In other races, Secret Ambition put a head in front of Musawaat in a seven-furlong dirt contest while Galvanize was galvanized to a third position 9 1/4 lengths away.

Trainer Satish Seemar scored a double win as Raven’s Corner flew away from Kimbear by seven lengths in the following seven-furlong dirt scamper with Silver Look bronzed by another 7 1/4 lengths.

Capezzano danced ahead of Footbridge by a length and a quarter while Claim The Roses claimed third by another half-length in the dirt mile handicap.

Godolphin closed the evening in the 12-furlong turf marathon with a four-leaf clover of a finish as Walton Street plucked a two-length lead from stablemates Eynhallow, Gold Star and Wolf Country.

Thursday is the final meet before Super Saturday March 10 and will feature two Group 3 and two listed contests. Most anticipated is the Group 3 UAE Oaks over 1 1/8 miles on dirt for fillies and mares with the second Group 3, the 1 3/4-miles Nad Al Sheeba turf marathon. The listed Curlin handicap will run over
1 1/4 miles of dirt to commemorate the 2008 Dubai World Cup winner and the listed Meydan Classic tests runners over a mile of turf.