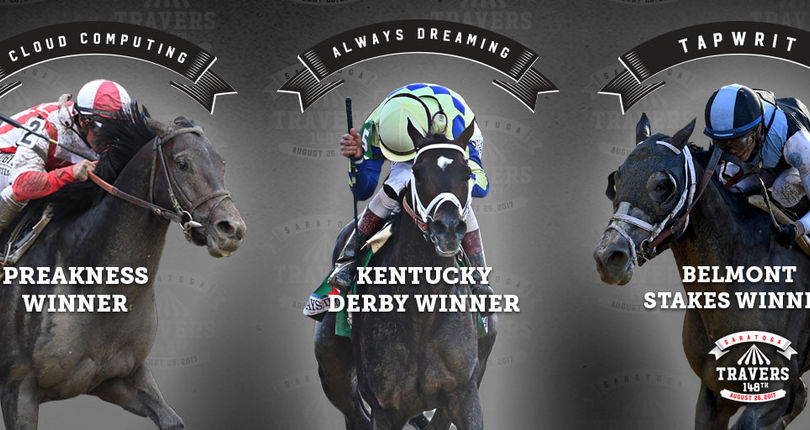 Travers Day at Saratoga has always served as one of the sport’s grandest stages; a Vegas-esque buffet complete with delectable appetizers culminating in the main course: The Travers Stakes. Back for the 148th year, the Travers picks up where the Triple Crown trail leaves off, inviting the sport’s top 3-year-olds for an all-inclusive pass to The Spa and a shot at the $1.25 million purse, a canoe, and of course, prestige. Saturday’s smorgasbord features SIX Grade I stakes races loaded to the brim with the biggest names in the game. It’s like the Breeders’ Cup, in August.

Back From the Trail

This year’s Travers Stakes is flat loaded. For the first time in 35 years, the winner from each of the three classics that comprise the Triple Crown are set to for a Travers Stakes showdown. Kentucky Derby champion Always Dreaming has faltered in both of his follow up efforts since that convincing romp in the slop on the first Saturday in May, leading many to wonder whether he’s truly cut out for the 1-1/4 without all the cards falling his his favor.

Likewise, Cloud Computing was unable to move forward off his career effort in the Preakness Stakes in last month’s Jim Dandy, tiring in the stretch and finishing last in the field of five. But if anyone knows how to get a horse primed for a rebound, it’s trainer Chad Brown, who believes his colt will find the conditions much more to his liking on Saturday.

“The track was very demanding [for the Jim Dandy],” said Brown. “This horse has never let us down in a workout or a race except that one day. [He] just didn’t come out of that race like we’ve normally seen. Since the race I’ve thought about the Travers a little bit, he’s come back and worked great twice going to the [main] track and it’s tightened up nicely and he’s ready to run his race.”

Oh sure, no trainer has ever not liked their horse on the eve of a big race, but you can never toss this barn out on the big stage at the Spa.

The Travers will be the first start for Tapwrit since his calculating victory in the Belmont Stakes back in June. While such a layoff might seem like a disadvantage, it’s simply business as usual for trainer Todd Pletcher. And business is good. The imposing grey son of Tapit is the tepid favorite heading into Saturday’s race.

All smiles from leading rider at #Saratoga, @jose93_ortiz, aboard #Tapwrit this AM