Animals do not have the free will to pick their owners and pick their jobs.

That is always decided for them. I like to think that in a perfect world animal owners have the best interest of the animal at heart, but the world isn’t perfect.

We boarded my horse Joey and my husband George’s mule Billy John in Titusville, NJ on private property that backed up to Bald Pate Mountain, a park with miles of breath taking horse trails. My husband retired a few years ago, giving us more time to trail ride together. To get to the trails from our barn, we had to ride up the mountain. It was no challenge for the mule, but my horse seemed to struggle with it.

“Go find one,” he encouraged me.

It was the Thursday before Easter, and I opened up an email with photos of horses that had gone through the auction the night before but were not sold. Their fate was that if they were not sold by the weekend, they would go to slaughter. I received this email every week and passed it on without opening it. I don’t know what made me open it on this particular day. The very last photo was a bay molly, 10 years old and 15 hands.

I know the risk of purchasing an animal under these circumstance. I was taking the chance with the intention that if she didn’t work out, I would simply send her back.

I kept her in quarantine for a few weeks, since I had no idea what she had been exposed to. I named her Mary Lou and sent photos to all of my friends. Friends sent her photos to friends and someone recognized her.

“I know this molly,” a woman informed me. “Her last owner was a friend of mine. She only had her for a few months but had to let her go for financial reasons.” The woman then filled me in on some of her background that her friend had shared with her.

Mary Lou was born in the south and mistreated by her first owner. Her second owner took care of her but also was not very nice. She used her for barrel racing and pole bending. The woman said, “I know she is a wonderful trail mule and she is supposed to drive single and double, but I have never seen her drive.”

The woman also knew that Mary Lou had been through auctions three different times in her life.

I fell in love with Mary Lou—she was kind and needed to be loved. Every night I took the time to groom her. She especially loved her head and ears rubbed. Mary Lou would lower her head and close her eyes loving every minute that I spent with her. I promised my girl that no one would ever hurt her again and she would never go through an auction again. Mary Lou was wonderful on trails but had a hard time focusing in the ring. I intended to school her and show her in Western Dressage in an effort to promote mules. Billy John always got all of the attention and I was hoping Mary Lou would do the same.

However, the molly never quite understood the concept. At her first and last dressage show, Mary Lou entered at ‘A’ and bucked down center line, as if racing barrels or poles. The rest of her test didn’t go much better. I withdrew her from her second test and took her home. This behavior was not helpful in promoting mules.

I wanted to try her in harness, but didn’t have a cart her size and couldn’t afford to purchase one.

Summers were hard on Mary Lou. I assumed that since she was from the south, she would have an easy time with summer in NJ. However, that was not the case. What was believed to be some kind of bug allergy caused her to constantly scratch herself, leaving raw blotches all over her body.

Instead of riding her, I spent most of the summers bathing her and treating her skin issues. One day I happen to run out of all of the bug medicine and opened up my medicine cabinet to see what I had to improvise. All that I found was people skin lotion with aloe made by Vaseline. I rubbed it all over her sore spots.

As all things change in time, our sons had grown up and moved out of the house. Without the boys, our house had become too big for us to manage. My oldest son and his wife purchased a farm in Florida and asked for our help taking care of their growing family. They were scheduled to move in three weeks before our house was to close. The timing was right, so it seemed like the right thing to do.

I was concerned about Mary Lou moving to Florida with her skin issue. So I started passing the word that she was free to a good home. I didn’t want to give her up, but I felt it was for her own good. My son’s farm had limited space and I now had limited time.

It was two weeks before the move to Florida and someone contacted me about her. The person was coming out the next day to meet her. I didn’t have a good feeling about it, so I prayed about it as I do everything else.

The next morning I gave her a bath and let her graze on the lawn to dry. She looked so content chowing down and wrapped in her blue cooler. My eyes filled with tears and a lump formed in my throat. I knew I wasn’t ready to let her go.

Just then my cell phone beeped and a message came through. “Sorry, I have changed my mind about the molly.”

The good feeling that I did not have about her potential new home served me right.

When the three animals arrived in Florida to begin a new life, it was Mary Lou who had the easiest time adapting. Joey and Billy hung their heads from the heat while Mary Lou remained bright eyed and bushy tailed.

With our new life as grandparents, it was hard to spend time with any of the animals. Joey was my first priority, as he is my soul mate. Billy came second, because he is my husband’s soul mate and Mary Lou was third. The only attention I could give her was a quick grooming and treat her dry skin with vegetable oil.

She was healthy, but saddened when Joey and Billy would go out on a trail while she stayed back. I started passing the word again that she was free to a good home. It was not fair to her. She needed her own person and she needed a job.

My new farrier in Florida grew up with mules. He and his wife also did some training and placed horses to good homes. I knew they were good people and I asked him to help me.

I felt like a heel when I dropped her off at his farm. Mary Lou would need some ‘tuning up’ and there was no guarantee that she would be placed. If it didn’t work out, I would take her back. I cut some hair from her tail to have a bracelet made and promised her that she would always be loved. In the back of my mind, I really expected her to return to me, even though I knew someone else could give her a better home.

She spent a few months at my farrier’s farm and every time he came out to trim Joey and Billy I would ask about her. The response was always the same, “The right person will come along one of these days.”

I wondered who the “right person” was.

My husband always said, “She is your molly.” Mary Lou thought so as well, but what was I to do? I continued praying and felt it was time to let go.

On Friday morning, the week before Christmas, I could feel Mary Lou calling to me. She called me the whole day and part of the next day. Something was amiss. I was tempted to call my farrier and ask if everything was okay. A few days later I felt Mary Lou was at total peace and very happy and I could let go.

The following Friday, my farrier came out for Joey and Billy. I asked the usual question, “Is there any update on Mary Lou?”

He stood up straight and said, “She went to her new home last Friday.” It was the same day as I felt her calling.

Then he proceeded to tell me that a man from Louisiana saw her video online and wanted her. He said he had a pair of mules and one of them died. His gelding mule was grieving so he needed to find him a new mate.

My farrier continued, “He drove ten hours from Louisiana to get her. He and his son seemed like really nice people. A few days later he called me and said that his gelding mule and Mary Lou are best friends and Mary Lou is doing really well. The two mules are driving as a team.”

That is my story and I am sticking to it. God Bless all who read my story.

Peggy DeForte Vurgason began teaching horseback riding at the age of 15 and later went on to ride professionally. Today, she competes in Western Dressage and trail riding on her horse, Homerun Joe, and along with her husband George and his mule, Billy John. Peggy is the author of The American Riding System, the fiction series Long Ears and Short Tales, and the soon-to-be published novel Hootenanny Spirit. 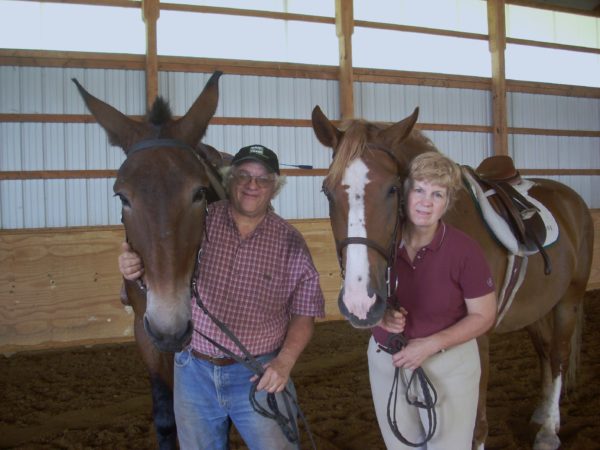 Peggy DeForte Vurgason began teaching horseback riding at the age of 15 and later went on to ride professionally. Today, Peggy competes in Western Dressage and trail riding on her horse, Homerun Joe, and along with her husband George and his mule, Billy John. Peggy is the author of The American Riding System, a book for elementary equestrian students and teachers, and Long Ears and Short Tales, fiction stories for the Brayer magazine. She is also the author of Hootenanny Spirit, a soon to be published novel about her beloved childhood horse, Hootenanny, and how he has returned to her in Homerun Joe. Peggy and George reside in Newberry, Florida.