Another ‘Championship’ Week in Dubai 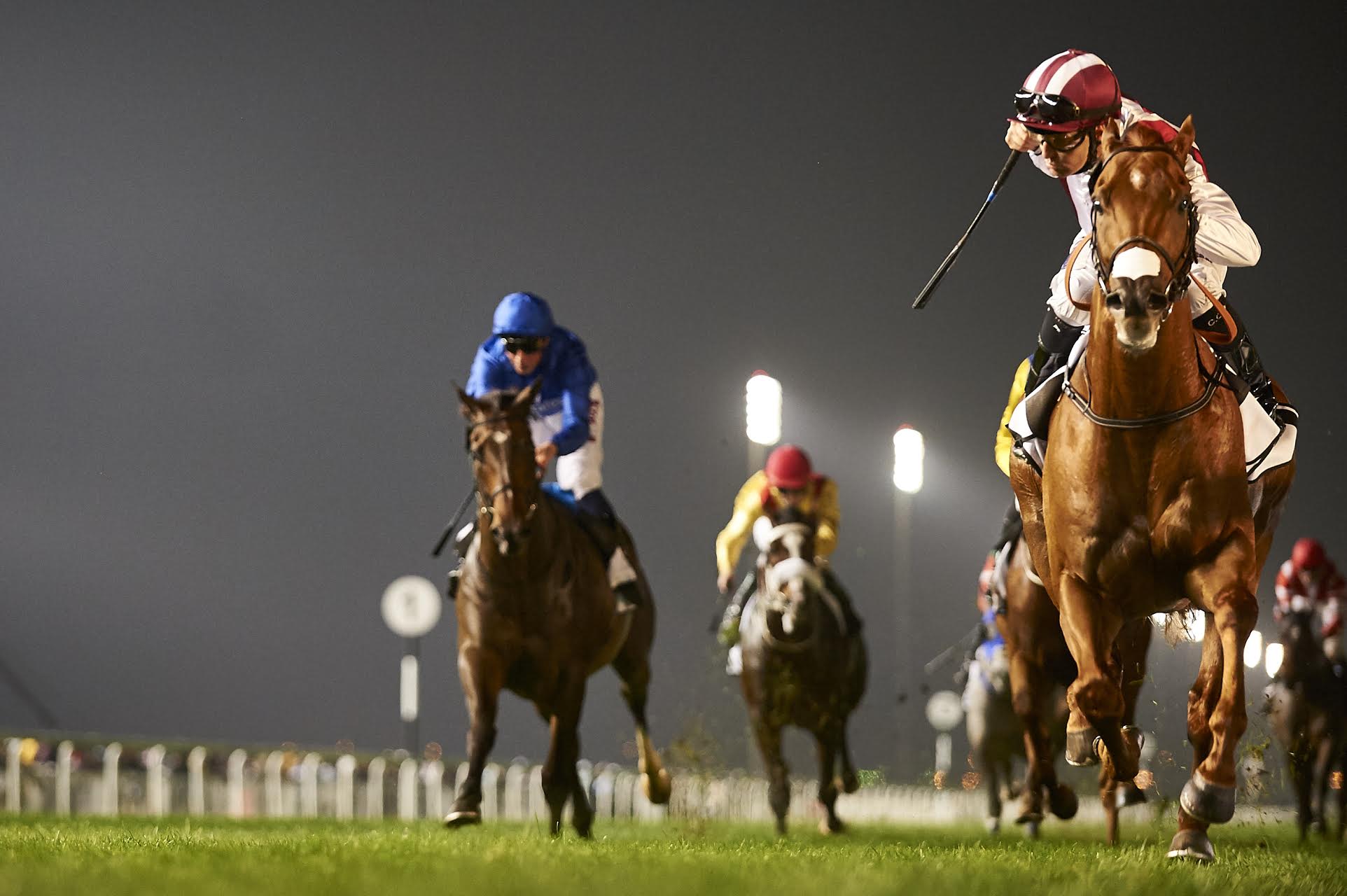 The Al Fahidi Fort is named after Dubai’s oldest structure, built in 1787, and the winner of this year’s 7-furlong Group 2 feature was 6-year-old Championship, oldest among the top finishers. Commanded by Colm O’Donoghue, the gelded son of Exceed and Excel did both as he journeyed from Ireland to never be headed and capture the Fort trophy in 1:22.82, just .05 seconds off last year’s 1:22.77 race record (Safety Check) over 5-year-old challenger Flash Fire, put out by 3 1/2 lengths and 4-year-old Noah From Goa, off the map by another 3/4 of a length.

Championship gained a measure of redemption after a tough denial by a neck to Light The Lights in the Singspiel Stakes on the opening night of this year’s Dubai World Cup Carnival.

“I was happy to be in front,” explained O’Donoghue, “and he was striding nicely. He found plenty when I asked him to pick up the pace just after the halfway mark. That was a good performance in a quality race after that tough loss two weeks ago.” 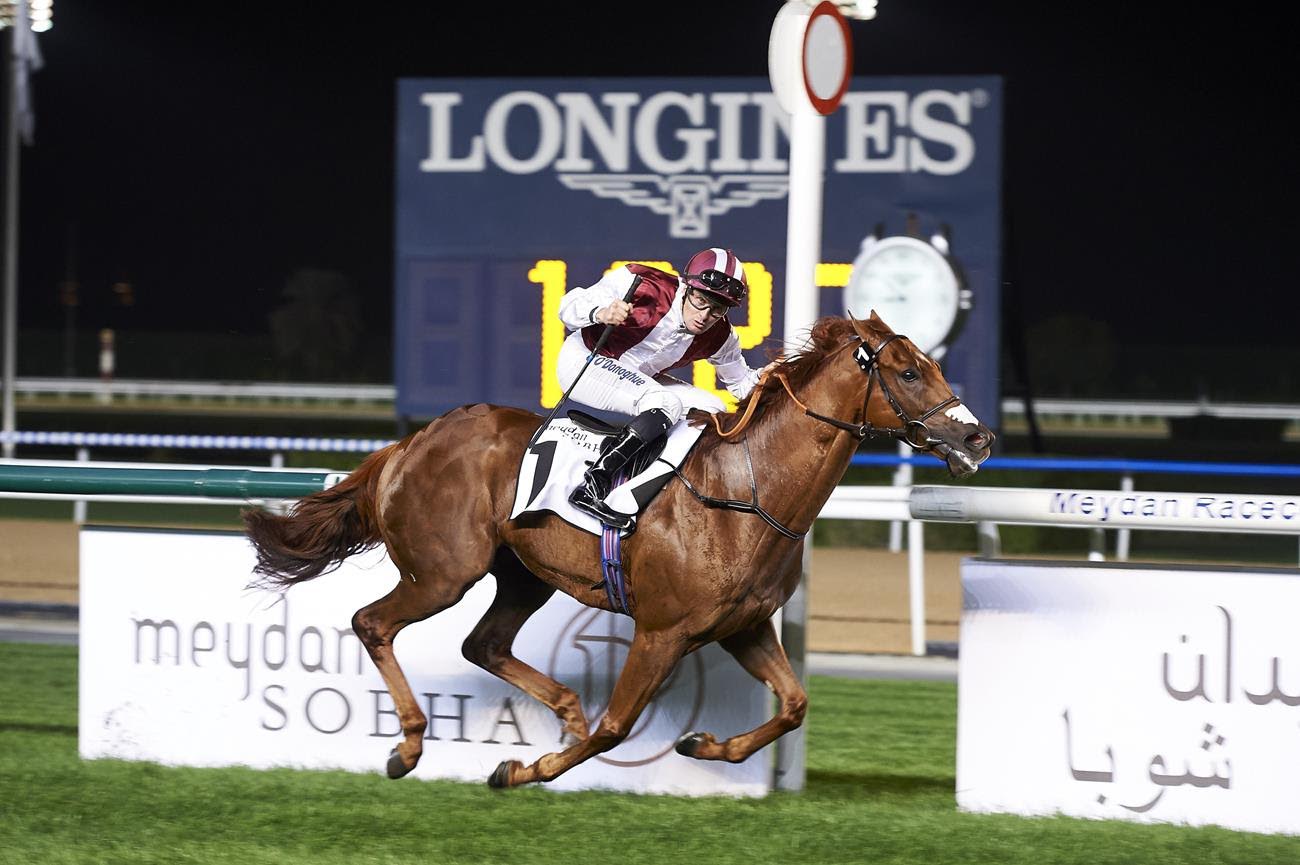 Trainer Ahmad bin Harmash was also pleased with his charge’s comeback performance, but had no immediate plan for his next Carnival start. Connections are beginning to map out their Dubai World Cup day strategies already a third of the way into the Carnival season. 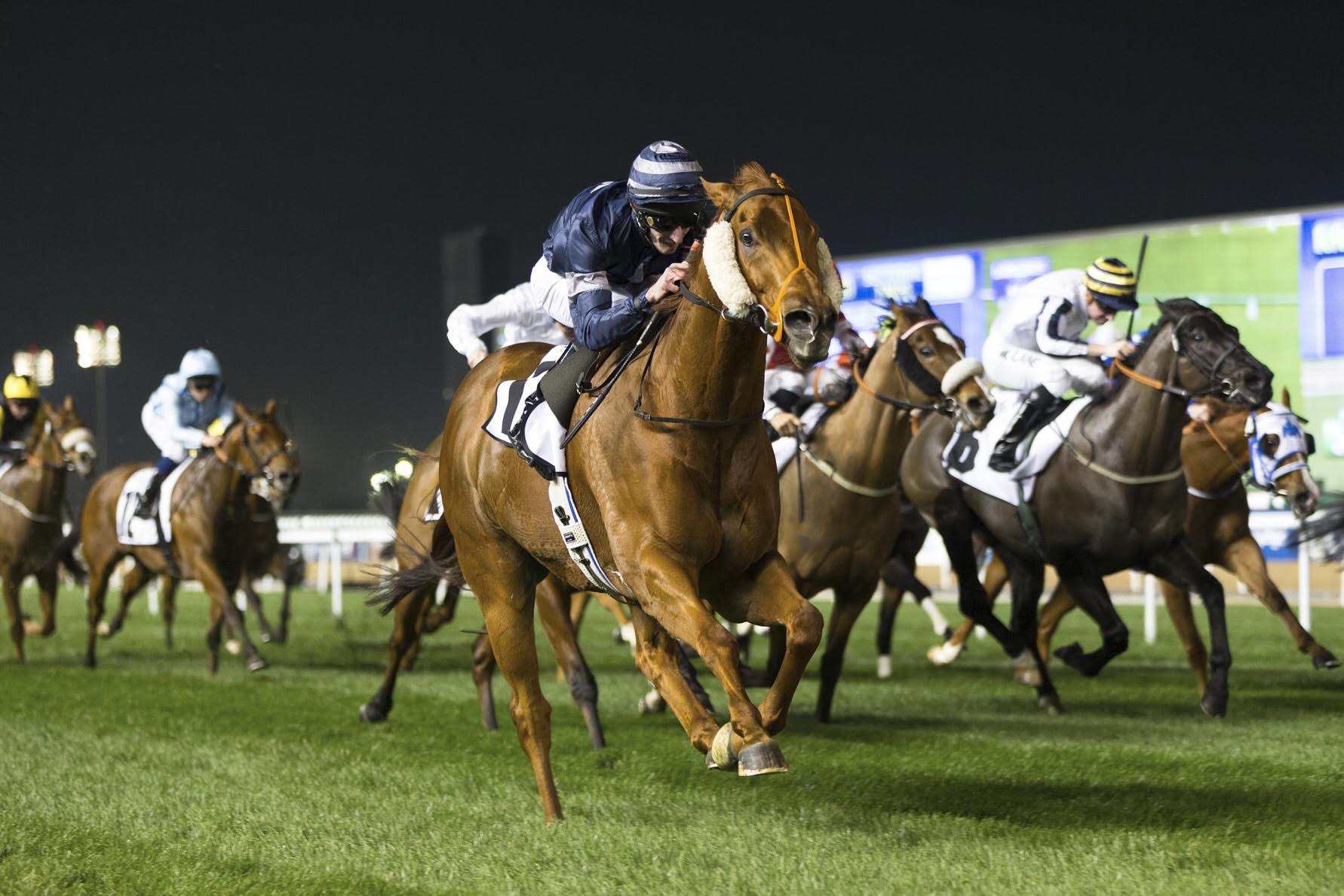 Running in his 73rd start in the five furlong (5/8 mile) Sobha Trophy on the green, 11-year-old Medicean Man proved he still can write a winning prescription assisted by jockey Jeremy Gask. The evening’s most exciting and crowded race saw Sir Maximilian and Harry Hurricane trail the fast-closing oldster by a sober 1 1/2 lengths in a dead heat race of their own with Line Of Reason a rational head behind in fourth, Saayeer another head behind in fifth and Maljaa off by just a neck in sixth.

The win comes on the hooves of last week’s winning feature win by fellow 11-year-old Reynaldothewizard in the Dubawi Stakes. Grab you bifocals and keep watching as we address in a future feature how leading Dubai trainers are keeping elder horses nosing up first to the finish line when they should be…well, finished.

Really Special was all that and more for jockey Christophe Soumillon and trainer Saeed bin Suroor in the UAE 1000 Guineas Trial. The promising 3-year-old Shamardal filly arrived first at the finish line in just under a dirt mile leaving Complimenti in the dust by 3 1/4 lengths and Rajar in third another 1 3/4 lengths ajar. The Darley-bred winner, who might be this year’s Meydan filly find, is undefeated in three races for powerhouse Godolphin and arrived to take her first winning bow at the Meydan Carnival on the hooves of a victory in the Montrose Fillies’ Stakes October 29 at England’s Newmarket. This was her first start on dirt following wins on the UK on Polytrack and turf.

“That was really special!” confirmed a very pleased bin Suroor. “There was a question mark about her handling dirt but she acted very well on the surface and I am sure she will improve.”

“She’s a strong filly and I hope that she can be something nice for the future. We will take her now for the UAE 1000 Guineas on Feb. 9 at Meydan and then make a decision about her next race. After Dubai, we will be looking to the European season and some of the classics there.”

Last year’s win in the UAE 1000 Guineas shot filly Polar River to acclaim, enough points for a gate in the Kentucky Oaks and a post in the UAE Derby on World Cup day when she suffered her first loss to eventual U.S. Triple Crown competitor Lani. 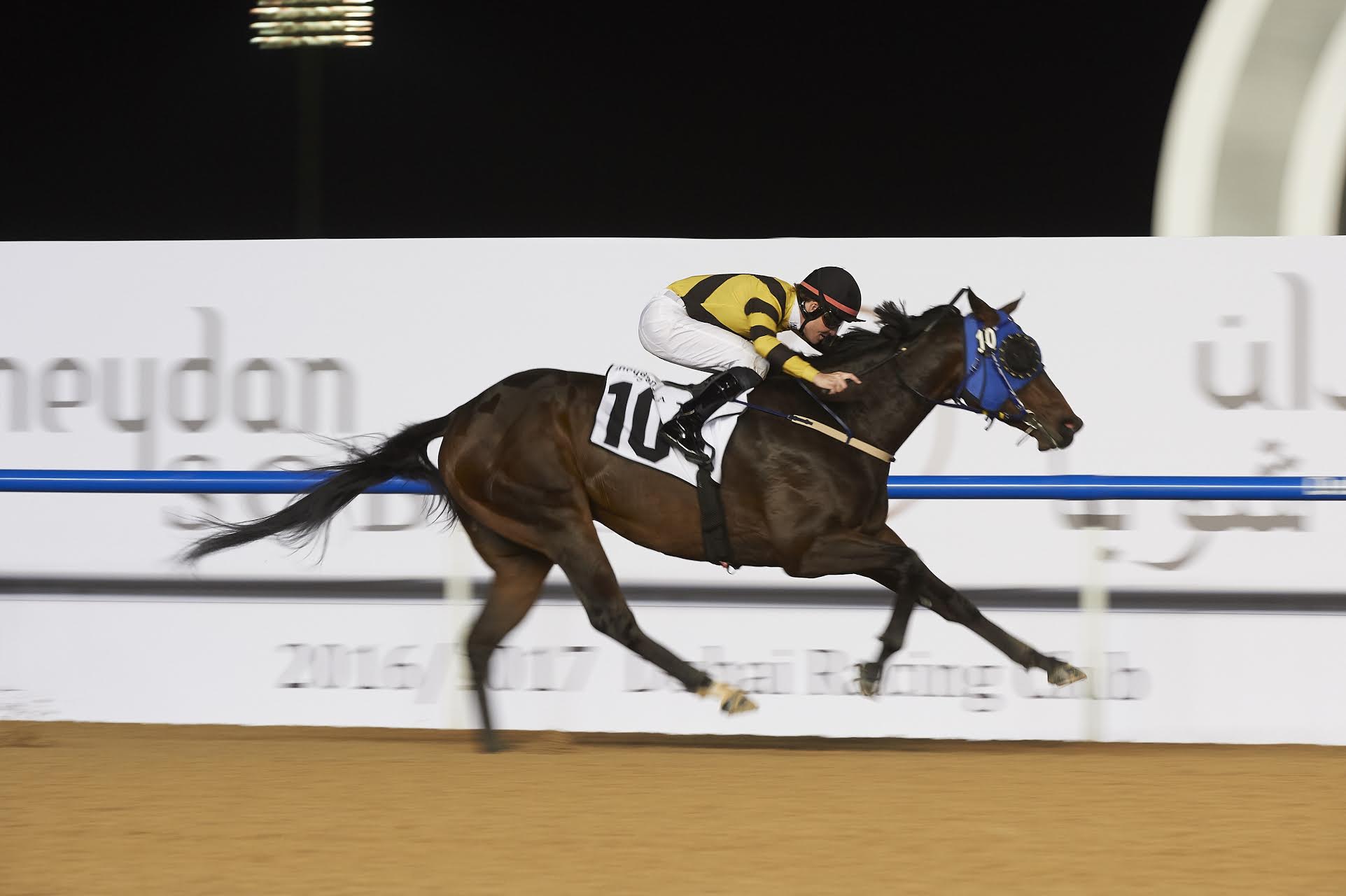 Main Stay stayed main by 2 3/4 lengths over Mashaaref while representing Korea with Shaishee a neck hungrier in the 3/4-mile dirt District One handicap. Seoul Bullet bookended the top finishers for Korea a neck back in fourth. The win was the first at the Meydan World Cup Carnival for a Korean challenger in a sport that has become increasingly popular on the peninsula.

Hunting Ground and jockey Mickael Barzalona bagged a half-length victory over Korean challenger Triple Nine in the 1 1/4-mile dirt Sobha with Los Barbados left on the beach in third by 3 1/4 lengths.

Nathr started the evening with a win for jockey Jim Crowley and last year’s leading Carnival trainer Doug Watson in the one-mile District One Trophy dirt handicap. The 6-year-old son of Dixie Union by Sweet Rider enjoyed a sweet ride capped by a four-length advantage over British runner Muhtaram with Irish 8-year-old Bannock a 3/4-length back in third.

Artigiano closed the evening artfully guided by William Buick in painting only his second win in only nine starts as a 7-year-old with a 1 3/4-length victory over Godolphin stablemate Folkswood, both trained by Charlie Appleby, to close the evening’s card in the 1 1/4-mile District One turf handicap. Brex Drago, running for Italy and trainer Marc Botti, was far south by 4 3/4 lengths.

“I chose to ride Artigiano,” volunteered Godolphin-retained jockey Buick. “He showed a lot of potential as a two and 3-year-old, but just lost his way a bit. He has shown that the ability is still there. “He is a strong traveler and when he can dictate it from the front, he is dangerous.

The Carnival season is in full swing with next Thursday’s meet co-featuring a pair of $200,000 Group 2 races, the Al Rashidiya and the Cape Verdi for fillies and mares.