Little Red Riding Hood Brings Down the House in the WIHS $35,000 Costume Class 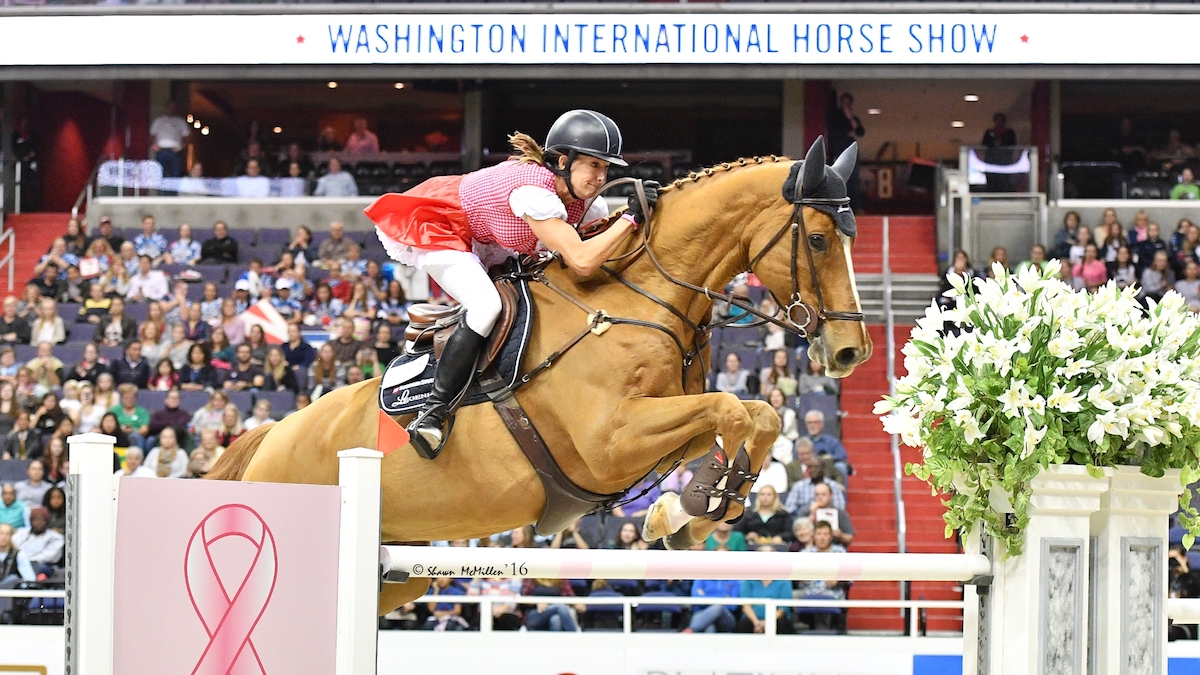 Though the wolves were scarce at Thursday night’s $35,000 International Jumper Accumulator Costume Class at the Washington International Horse Show (WIHS), Laura Kraut (aka Little Red Riding Hood) laid down a fearless performance nonetheless under the lights of Verizon Center in Washington, D.C.

“Andretti was perfect tonight,” said Kraut. “He was concentrating, he was excited, but he’s always good here at Washington. I think he likes the crowd yelling and screaming.”

Kraut and the 11-year-old Dutch Warmblood gelding (Corland x Animo) cleared the course and the high side of the joker fence for a 65-point total and the fastest time of 44.47 seconds. Kraut was awarded the Crown Royal Trophy as the winning rider and Andretti S earned the Sue Ann Geisler Memorial Trophy, donated by the Washington International Horse Show, as the winning horse.

Kraut dressed as Little Red Riding Hood for the costume class, though she says she was forced to remove a critical part of her costume—her silky red cape—before competing after it proved a bit too spooky for the warmup ring. She and Andretti have shown at WIHS three times in the past, and Kraut is especially happy with his progress this fall following an incident that occurred earlier in their competition year.

“He started out the year fantastic in Florida,” Kraut says. “Then we had an accident; he fell at a water jump, and it took him a little while just to get his confidence back. He never did anything bad, but he just was nervous. Sort of starting at the Gold Cup he has gotten better. He always seems to like that show, and he has been going well again, and he has been very consistent.

“For some reason he loves Washington,” Kraut added. “He is a claustrophobic type of horse. He doesn’t like other horses coming towards him, but I think this is the third year I have brought him here and he always does well, so it is fun. I am happy with him.”

The 58th Annual Washington International Horse Show (WIHS) is being held October 25-30, 2016 at Verizon Center in Washington D.C. An equestrian tradition since 1958, WIHS is the country’s leading metropolitan indoor horse show. Each October, more than 500 of the top national and international horses and riders, including Olympic veterans, come together in Washington, DC, to compete in six days of thrilling competition.

For more information or to purchase tickets, visit: www.wihs.org.