From Rookie to Rio in a Year and a Half 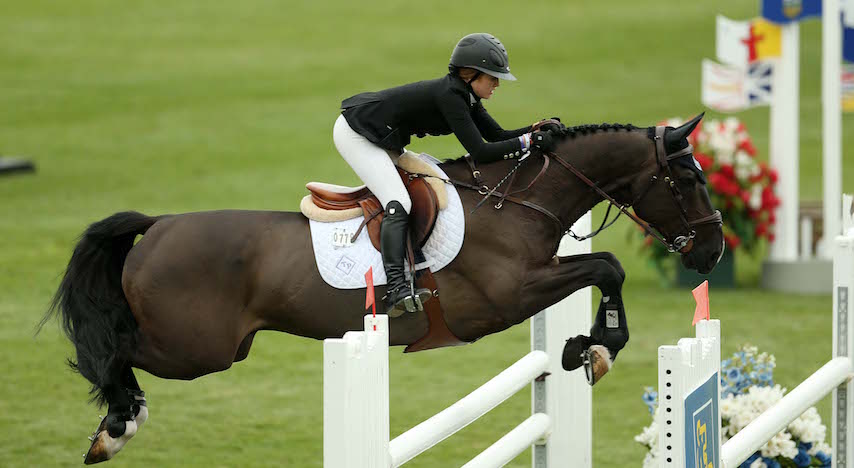 Kara Chad of Calgary, Alberta was the Travelling Reserve for the Canadian Show Jumping Team at the 2016 Olympic Games in Rio de Janeiro, Brazil. Here she recounts what it’s like to make your first Olympic team at just 20 years old, as told to Carley Sparks.

I was in the car when I got the email.

My sister, Bretton, my good friend Saree Kayne and I were heading to Kananaskis to go rafting with a group of friends. It’s a two-hour drive. I knew the Canadian Olympic team would be announced that day so when I heard my phone ding I grabbed for it. They immediately pulled it away from me, of course. I was behind the wheel.

Sara read the email out loud.

Driving down the Trans-Canada Highway and hearing that something you hardly dare dream for has actually come to fruition—that you’re the Travelling Reserve for the Rio 2016 Canadian Olympic Team—it’s surreal. I was shaking. I started to cry. In hindsight, I probably shouldn’t have been driving.

I’m so happy my sister and one of my best friends were there for that moment.

The Olympics for me was always a distant dream. To be honest, even being considered for the Rio team was a bit farfetched at this point in my career.

I just turned 20 this year.

In no way do I have the experience or necessarily the skill quite yet to be an obvious choice for Rio. Especially when you’re in the company of living legends Eric Lamaze and Ian Millar and team veterans Yann Candele and Tiffany Foster.

But, if you’re an aspiring professional, you entertain the hope anyway—maybe more than you might admit. If nothing else, it keeps you looking forward.

We knew the Olympic team was going to be chosen based on a series of Observation Events throughout the 2016 season. But in the end, the selection all came down to the Spruce Meadows Summer Series in June.

Coming into it, I wasn’t that focused on qualifying for Rio. Spruce Meadows on its own is already a big deal. I ride for Eric’s stable, Torrey Pines, and knew I had a lot of horses to campaign in Calgary, so I was gearing up for a successful season.

In my mind, if Rio happened, it happened.

Then a few days before the National tournament started, Ian Millar announced that he was withdrawing from team contention. His top horse, Dixson, had minor surgery on his nasal passage earlier in the year and wasn’t going to be back to work in time.

It was a shock. We were all extremely disappointed that our most experienced team member wouldn’t get to compete at his 11th Olympic Games. And at the same time, it was an opportunity. All of sudden, the Olympics went from a distant dream to a slight possibility.

I had proven to our chef d’equipe Mark Laskin and the Olympic Committee that I was worthy of the consideration. But it those first few weeks in Calgary were crucial.

Bellinda, my top horse, and I performed quite well. Just one time fault in the CSI5* RBC Grand Prix the first week. A second place in the 1.55m Table A the following week.

In the back of my head, I’m thinking, well, this is definitely helping.

I also had a couple other horses to compete in the FEI division, thanks to Eric, which definitely helped. Experience always works on your side and just being out there, jumping, keeps you in the forefront of the Selectors’ minds.

As the weeks went by I’d get snippets here and there. I was more in consideration. I was less in consideration. You can drive yourself a bit crazy trying to judge where you are on the short list without straight up asking Mark, AM I IN?!

Then there’s the strain of constant competition. Three weeks of back-to-back 5* classes is a lot. When it’s going well, it’s great. But the stress compounds each week. With each class. That third week was a lot of pressure.

Luckily, it kept going my way and the Selectors named me to the team with Eric Lamaze, Tiffany Foster, Yann Candele, and Amy Millar.

After you get the official announcement, it’s another two and half weeks before you’re allowed to tell anyone. And there are serious consequences if you leak the news. There’s this whole warning email that comes with it. It’s rather nerve wracking.

Thankfully, I didn’t have much time to think about it. There was still another week of the Summer Series to get through at Spruce Meadows.

When the team announcement finally went public we were in Germany for the Aachen CSIO5*. Immediately, your phone blows up with all these congratulations. It’s really exciting.

I don’t think it really sunk in though until the flight to Rio from Brussels. All these athletes are boarding the plane. Guys that are like eight feet tall. These tiny little marathon runners. It just hit me. Holy sh*t, this is actually happening.

Then you get there and it’s just extraordinary. All of the world’s best athletes concentrated in this one location. I had to keep reminding myself that I was at the Olympics. I was part of this.

Being the Reserve Rider, I’d didn’t think it was likely that I’d be called up. All our horses were super healthy. All the athletes were on their game. Then France’s Simon Delestre dropped out. And Marcus Ehning for Germany. I thought to myself that this could really happen. The chef d’equipe for each team has until 8:30am the morning of the warm-up competition to make a swap.

Thankfully, we didn’t have any problems with the Canadian horses or riders.

I spent the rest of the week as the number one cheerleader for the team, just soaking it all in.

Ian Millar was there too, helping Amy. It’s an honor just to walk the course with Captain Canada and get the perspective of a 10-time Olympian when you’re at your first Games.

There was this moment when we were walking up to the ring just before Amy was going in for the first individual qualifier and he looked back at me with a worried look in his eyes and said, ‘I don’t know if I’m going to make it!’ He was so nervous! I’ve never seen him like that. Not that confident figure you’ve always looked up to.

Amy posted a clear round that day and he was just over the moon—so incredibly proud! Seeing such as fierce competitor being that passionate and wanting it so bad for his daughter, that was a tender moment.

There were so many more memorable moments that week. Canada jumping off against Germany—GERMANY—for the team bronze. Eric, doing what Eric does best, winning another medal. This time individual bronze. What a week.

Looking back, I can’t say I’m disappointed that I didn’t get to compete. My teammates 100% deserved it and the horses performed tremendously. I’m beyond grateful.

Come Tokyo 2020 though, I plan on being one of the main four.