Canada’s Rebecca Howard on Her Top 10 Finish in Rio 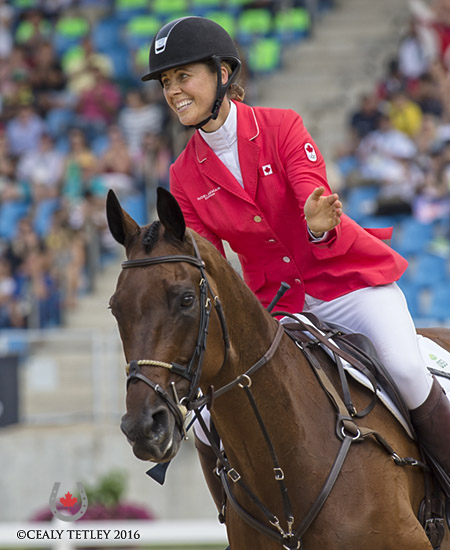 Rebecca Howard and Riddle Master are back following a 10th place finish in the individual eventing final at Rio.

The sole Canadian in the final, Howard and her 15-year-old Canadian Sport Horse “Rupert” notched up 65.80 penalty points for the strong finish.

This comes after a tumultuous few years, with Rupert sustaining a stifle injury during the cross country at Badminton in 2014 that crushed their dreams of competing in the World Equestrian Games that year. Following rest and recovery, the pair notched up two finished CCI4* in 2015 to qualify for the Rio Olympics.

“We managed to jump two clears at our last two four stars so I’m glad we continued that trend when it really mattered,” said Howard of their showing at Rio.

She said Rupert can feel a bit stiff in his body at times but through this season has been getting “more soft and rideable.”

The duo had a rail down in the last jump of the triple combination in the jumping final, which Howard attributed to a spook. “He’s a funny horse. He had a spook in him and a little bit of a slip around that turn coming into the triple. I had to ride a bit more forward and that caught up with us at C.”

After the final and 10th place finish, Howard said she needed a bit of time to let it all sink in.

“It’s going to take a bit to absorb,” she said. “It’s pretty cool. It’s something you work on for so long and you try to make it feel like a normal thing as much as you can.”

The Canadian eventing team, comprised of Jessica Phoenix, Colleen Loach, and Kathryn Robinson is a “great group of girls,” according to Howard. “We’re so lucky and have had a great week and we’ve been supporting each other the whole way.”

Stay up to date with our on the ground live coverage of the 2016 Olympics!