Researchers Are Digging Into the Ancient Origins of the Arabian Horse

It’s thought to be the oldest breed of riding horse, its distinctive dished nose, wide-set eyes, and large, flared nostrils—that once helped these early chariot horses dissipate heat in the desert—the subject of ancient art for centuries. Arabians are found in Saudi Arabian rock carvings dating from 800 BCE to 200 CE, in terracotta figurines from Syria (2300 BCE), and gracing the tombs of the ancient Egyptians (1427-1401 BCE). Today, a group of researchers is trying to learn more about the roots of this mysterious and noble breed. 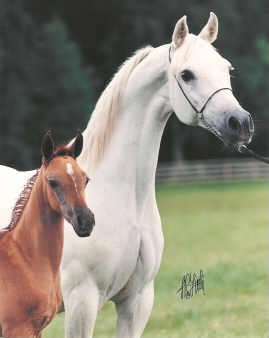 Dr. Anas Khanshour of Texas A&M University is studying hair samples from more than 250 horses from 11 different populations of Arabians (including those in the U.S., Saudi Arabia, Syria, and Poland) in an attempt to identify exactly where and when the breed was first created. DNA has so far revealed two interesting things about its origins. First, that many Arabian breed lines share the same maternal haplotypes (DNA inherited from a single parent), meaning that early breeding was likely not as rigorous as originally thought. Second, by concentrating on the DNA showing the greatest genetic variation (populations further away from the source tend to have smaller gene pools), Dr. Khanshour discovered that the region in and around Syria is most likely the birthplace of the breed.

Meanwhile,  Dr. Sandra Olsen, a zooarchaeologist and curator at the Biodiversity Institute and Natural History Museum at the University of Kansas, is studying ancient art and artifacts depicting Arabians in order to discover how the breed spread outside of Syria to various corners of the Ancient World. According to Olsen, Egyptian pharaoh Thutmose III, who ruled from 1479-1425 BCE, kept records of his war bounty, including horses and chariots from Syria. If this was indeed the pinnacle moment when the Arabian was introduced to the Egyptian Empire, it didn’t take long for them to catch on. By 1427-1401 BCE and the reign of Amenophis, images of the breed were widely seen in Egyptian tomb art.

You can read the full story at The National UAE.