For the Love of the Horse

Home > Blog > Horse Rescue > For the Love of the Horse 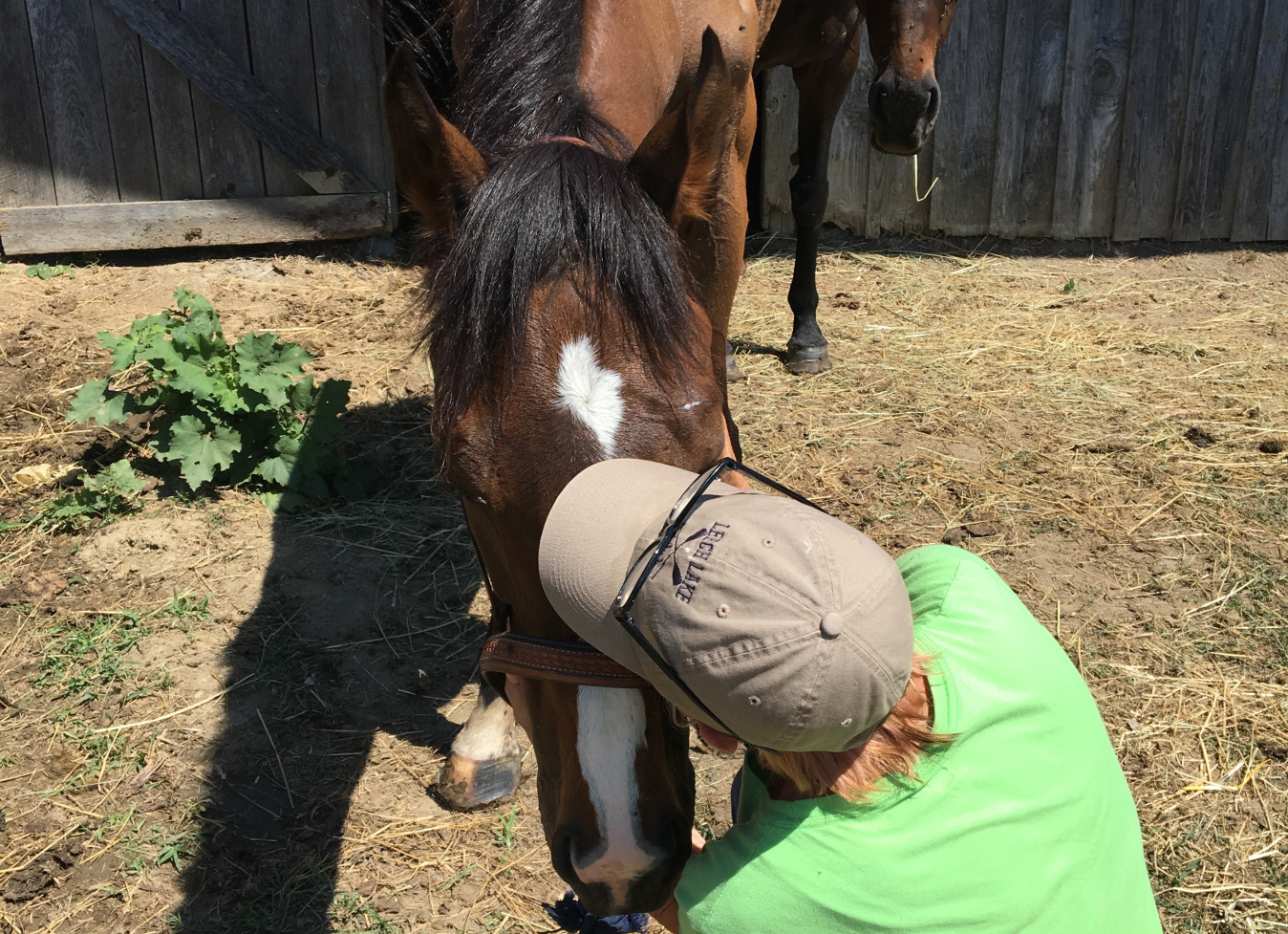 I got the text message Monday afternoon. I had known about the neglect case for quite some time as my good friend Carrie Gilbert had been in the thick of it for months. A thoroughbred named Silver Cliff she had re-homed for a friend was located at the farm and was in bad shape. For months, Carrie had been speaking with anyone she could to secure this horse and make sure he was safe. She had gone about it as professionally, ethically, and determined as possible but with no real success.

So when she texted me to ask what I was doing later that evening, and if my truck and trailer would be available, I quickly said yes. Of course. I could be there in a matter of minutes. Silver Cliff would hopefully be getting released in the next 24 hours she said, and my heart began to pound.

Then I began investigating, reading the articles on USRacing and Paulick Report and Facebook posts by Fox Hill Farm and Maggi Moss on the situation and the horses that were on the farm.

Each article mentioned a horse named Z Camelot, who along with the horse Carrie was after, Silver Cliff, had become the de facto faces of this movement, striking the most interest. I knew why Silver Cliff had garnered so much interest—he was identified, for one, and he was a grey by the beloved Silver Charm. But I was unaware of Z Camelot’s story so I started to dig, and what I uncovered made my stomach turn.

I soon discovered that Z Camelot was out of a mare named Madame Thor. She was a Deputy Minister mare that had been in my care during my time at Chesapeake Farm. This mare had provided me with my favorite foal of the 2008 crop—a stunning dark bay colt by Gone West. Z Camelot was the younger brother of that horse. Now, this was personal. 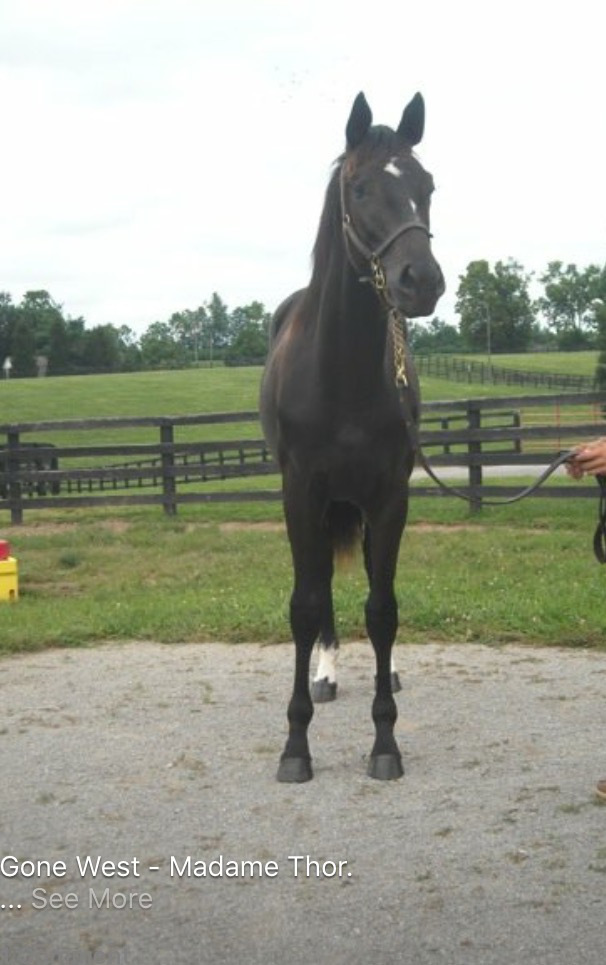 Z Camelot’s big brother as a yearling, at Chesapeake Farm.

I called Carrie and begged her to give me the information I needed to get him in addition to Silver Cliff. I was already driving my rig to the farm for her, so why couldn’t we take both? I called Drew Nardiello, the owner of Chesapeake Farm, and filled him in on situation. His response was—as it always is—an immediate “Go get him.”

Then I found out we weren’t the only ones fighting to ensure the safety of this horse. He had been bought as a yearling for $550,000 by Zayat Stables of American Pharoah fame, and they were also desperate for his release. So, as any normal 30-year-old graduate student does, I dug up Ahmed Zayat’s personal cell phone number and sent him a text.

I explained who I was and told him I understood that while he didn’t know me from Adam, I was sane. If I was able to get Z Camelot released, I explained, would it be ok to do so? He responded with an adamant “YES”, and then the ball seriously began to roll.

The next 24 hours became a blur…because we got them. 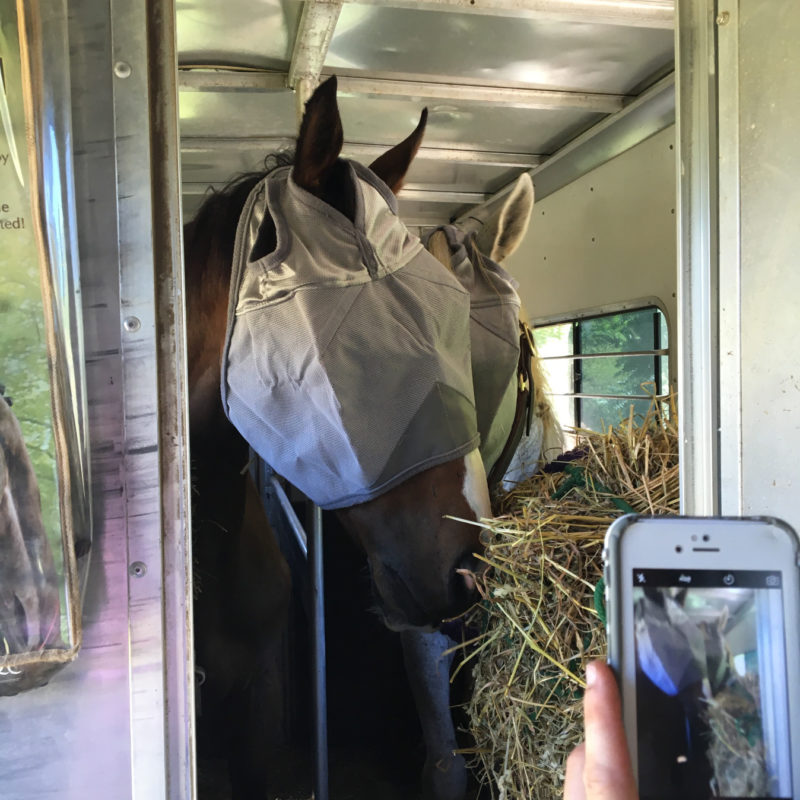 Z Camelot and Silver Cliff, as well as four other horses, were released Tuesday into the care of a local equine rescue in Lexington, KY, where they will receive around the clock care. They loaded up into my tiny two horse bumper pull trailer, hauled the hour away as we followed Carrie’s truck, and unloaded into a different world. For now, they are safe. The road ahead of them is long, but the road blocks are fewer.

I don’t want to go into the state of the farm or the horses that were and are still there. I don’t want to mention the alleged owner’s name any more than it ever needs to be mentioned again. I don’t want to become one of the many threatened with a lawsuit. The level of neglect has already been documented by authorities and I am late to the game to be able to weigh in on what it was like then, or how much it has improved or declined since. 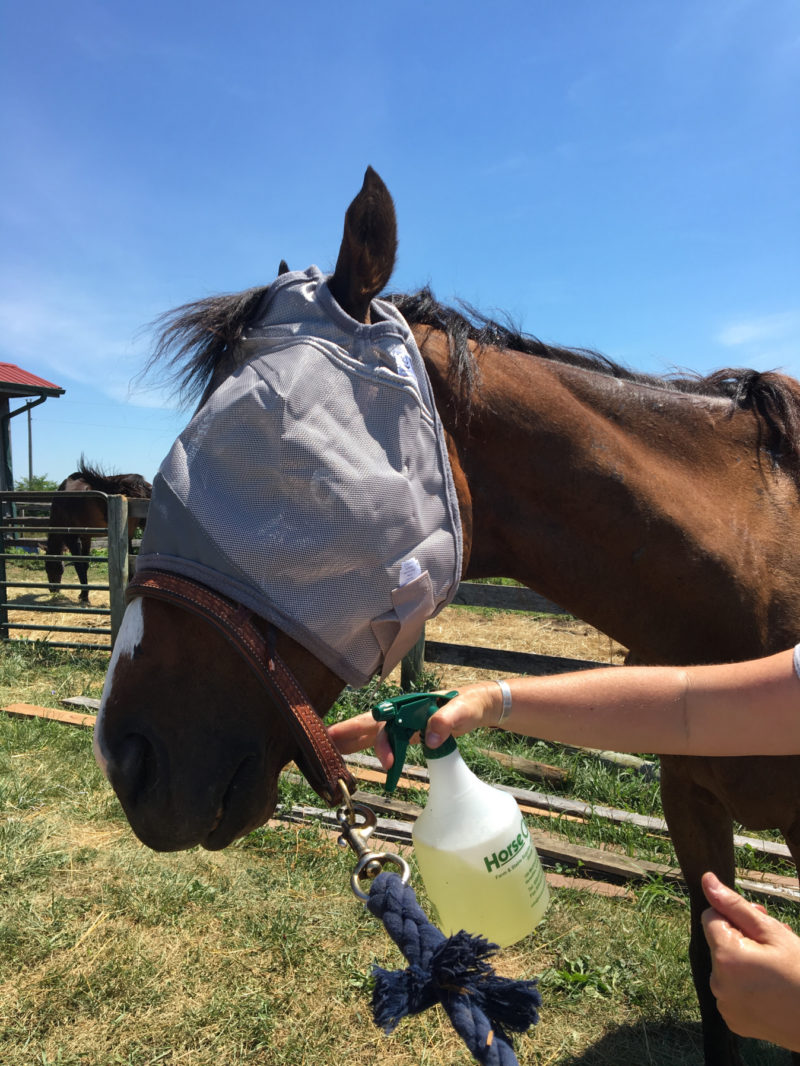 Carrie spraying on donated flyspray while Z Camelot is adorned with his donated flymask.

Tears welled into my eyes when I walked into the local tack shop this morning and the woman behind the desk asked if my name was Carleigh. She told me my mother had called and donated $100 for me to buy whatever I thought most needed. Tears began to stream down my face as I heard that same woman answer phone call after phone call as more donations and funds poured in. From adoption agencies, bloodstock agents, governing bodies, to the small breeder in Alabama, the support was endless. It made me so proud to be a part of this thoroughbred breeding and racing industry; to know that each of these people calling were in this business for the right reason—the love of the horse. 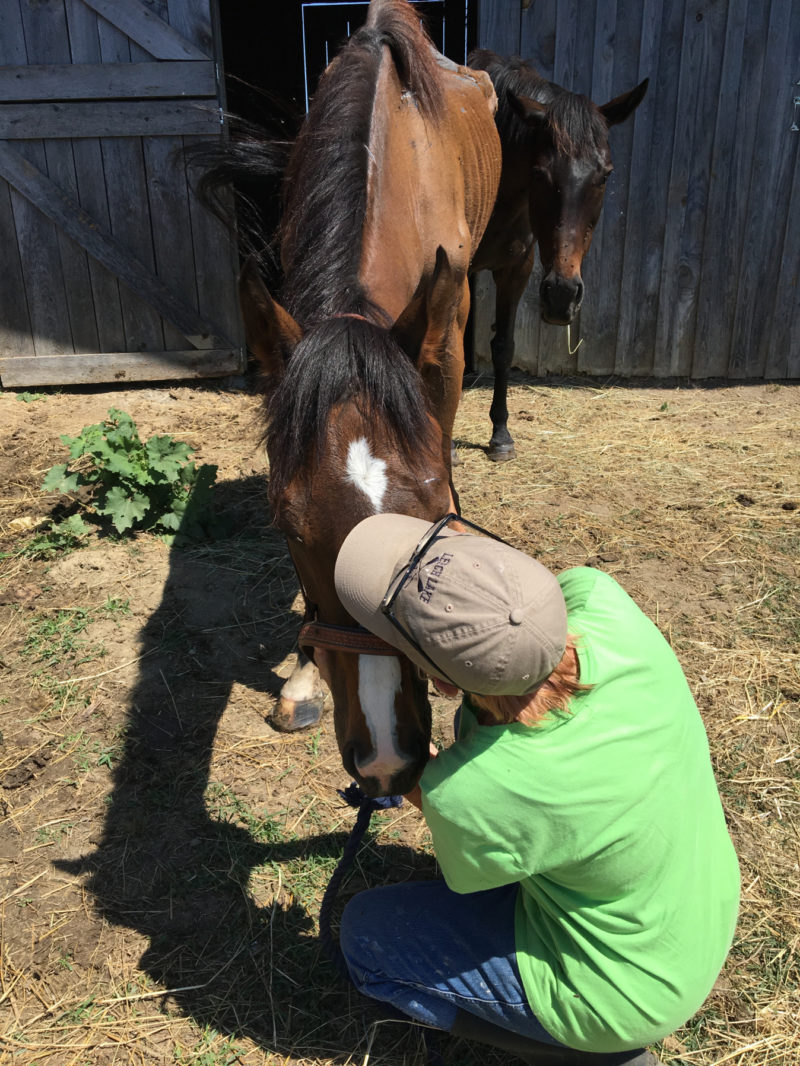 My eyes welled up as I watched the volunteers say good bye to Silver Cliff and Z Camelot. As they embraced their faces and necks and whispered sweet nothings to them, I couldn’t help but feel myself begin to sob, acknowledging how much these ladies and men have done. They offered their time, money and skills well before it was publicized. They didn’t help because of a shout out on social media or a blurb in a blog, they did it because they loved the horses.

A sob stuck in my throat when we unloaded these first two horses into their temporary home with the Thoroughbred Retirement Foundation, a charity that willingly stepped up to the plate to be the safe haven for these animals as they live in limbo between owners. A facility that exists solely for the rehabilitation of both humans and horses as they heal each other. Because there is nothing more rehabilitating than the love of a horse.

I finally broke down as I left TRF and watched the two horses grazing in my rear view mirror. In a green field surrounded by pristine 4-plank fences, acknowledging how much time, energy, resources, good will, strength, luck, and yes, tears, went into securing their future.

These are the real heroes of this story. The volunteers who were there day in and day out. The industry that stepped up when push came to shove. People like Carrie Gilbert who forged the way through the red tape. The TRF who offered these horses a safe haven, and the horses who are the string tying them all together. 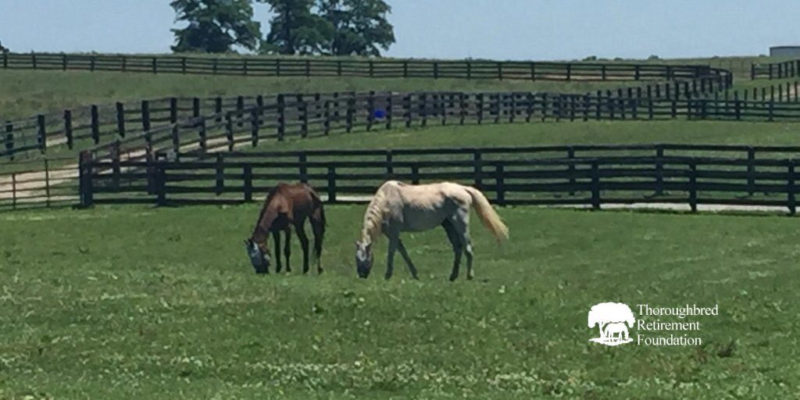 I don’t know what will happen to these horses, especially Z Camelot and Silver Cliff, but I do know they at least have a chance now. I told someone earlier today that I can’t predict the future, but if I were a betting woman, I would bet on both of them powering through these next few months. They might be thin, weak and confused, but both had a glimmer in their eye as they headed towards the trailer. Both held their heads high as we lowered the ramp. And, they each looked proud as they grazed in their new home.

And that is truly all that matters. Heart. The will to live. And the glimpse of a little sparkle in an eye.

Read more at A Yankee in Paris 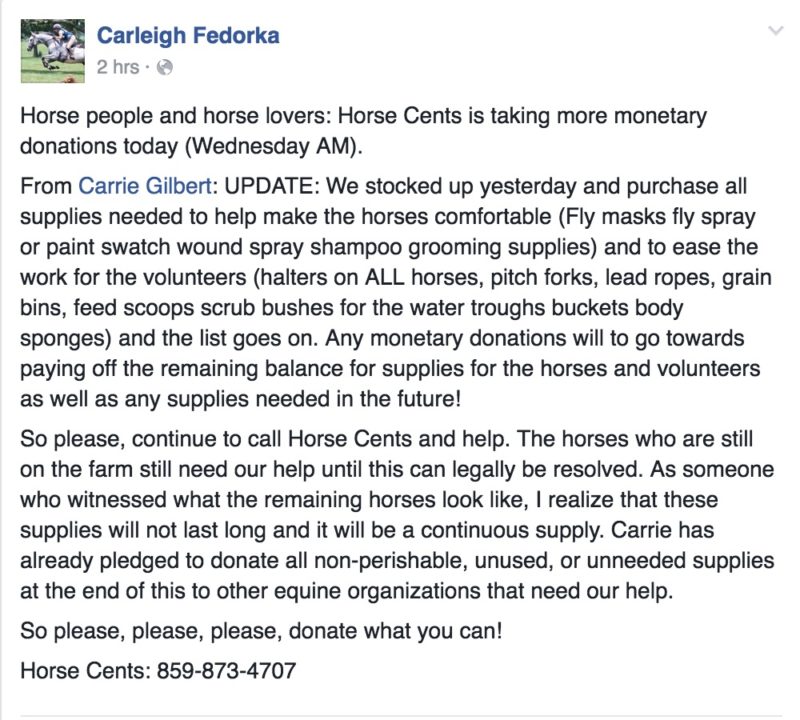