Four months ago, Daniel Coyle was a professional show jumper in Ireland without any horses or owners. Last week, in Langley, British Columbia, he made his senior Nations Cup team debut.

“In Ireland, I had good horses and good owners,” says Coyle. “Last year, one of my horses died and the other owner left the sport. That left me in a difficult situation. I had to sort of start over and try to find horses and I hadn’t got any owners so I hadn’t any money.”

The 22-year old decided it was time to explore other opportunities.

Coyle recruited Barry O’Connor, a horse dealer from Malahide, to help him find a riding job. They were looking at stables in Germany when a call to fellow Irishman Conor Swail opened the door to a position with Canada’s Lothlorien Farm.

“Barry said, ‘This is a serious good chance for you. I haven’t done this for anybody at this level in this type of job. I hope you can do it.’ I said, “Yeah, I think I can.” I had to be a wee bit cocky to get it,” laughs Coyle. “I’m glad it worked out!”

Hired on trial, Coyle arrived at Lothlorien’s winter base, Lotherlorien South, in Wellington, Florida this past winter. Since March, he’s climbed a whopping 745 spots up the world rankings, based almost entirely on results he’s earned on the nine-year-old Canadian Sport Horse gelding Tennyson. 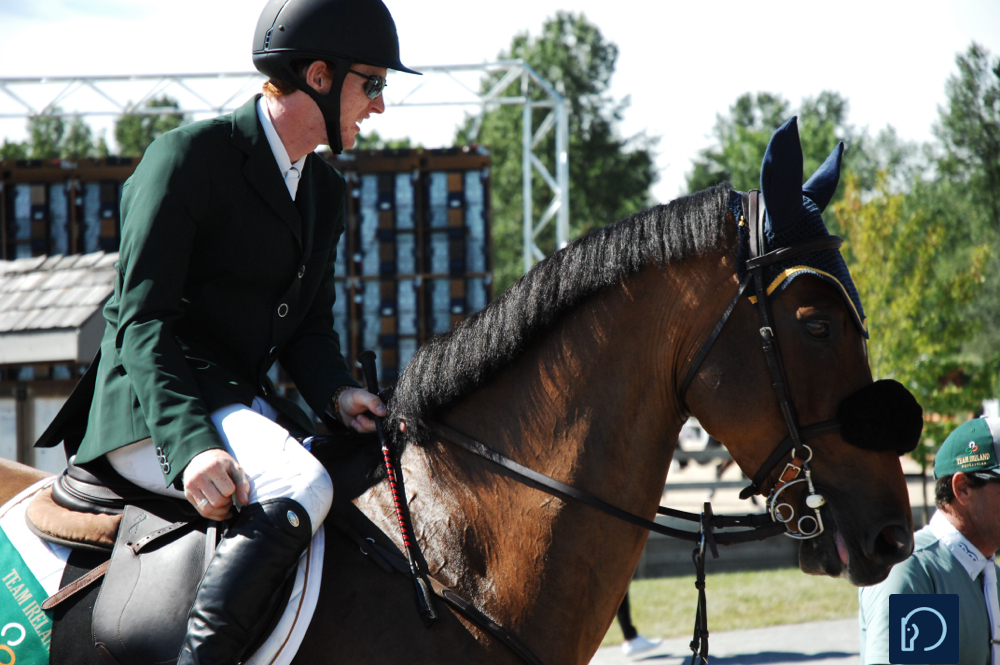 “He had a little thing with the water. Conor said, ‘Take that horse. You’ll have to work at it for a little while. You’ll do fantastic on it,’” says Coyle.

Previously campaigned by Canada’s Darrin Dlin, Tennyson had one 1.50m class under his girth at the time. He and Coyle were an instant match.

Last week, the rookie pair rode for Ireland in the Furuyissa FEI Nations Cup at Thunderbird Show Park in Langley, BC. It was Tennyson’s first 1.60m class and Coyle’s first time on the senior team. Together, they posted a double clear—one of only three faultless performances that day.

“I have a good partnership with Tennyson, which makes a big difference I’m sure because he’s a very cocky horse but at the same time, he can get upset very easily. Like in the first round, he started to go really high and got nearly too comfortable half way around. I got him going and he stayed careful. The second round it was very easy actually.

“The horse doing that for me is amazing,” continued Coyle. “I hope I can just keep getting better and he can get better. He’s going to be a serious good horse for me.”

As for the Irish import, he’s rather pleased with the move. “I have to thank Sue and Ariel Grange, who own the horse, and Conor for giving me the opportunity. I’m only here four months. I’m delighted where it’s taken us. I’m very lucky!”