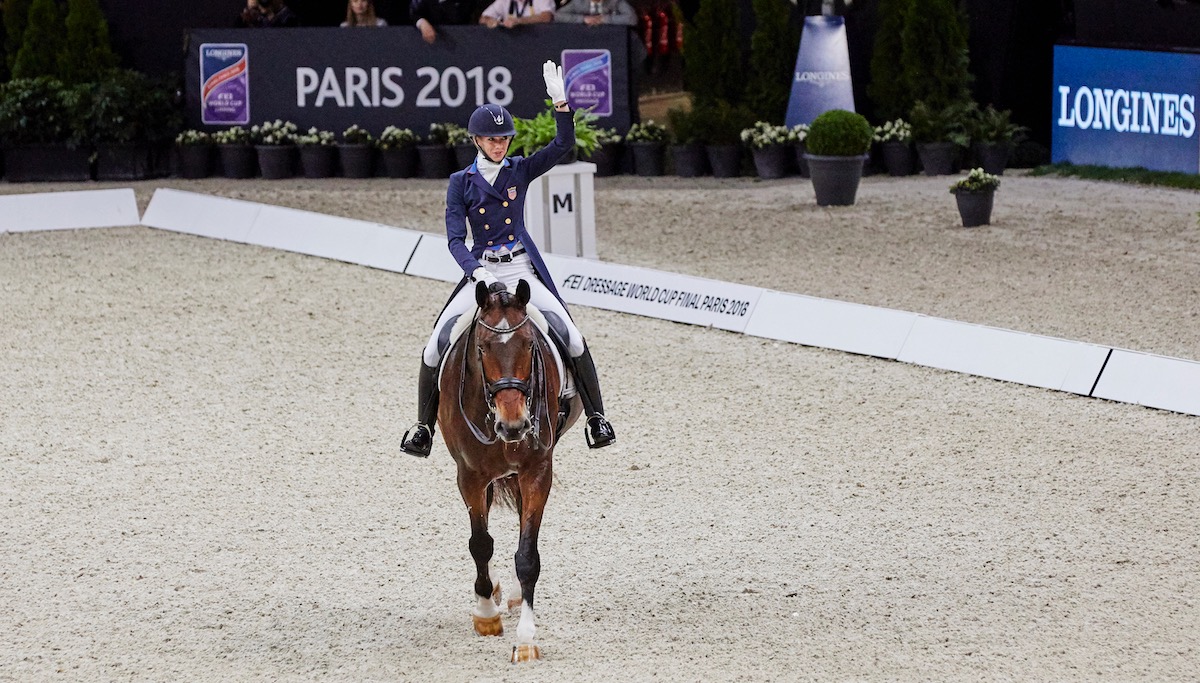 When Laura Graves (USA) and Verdades went supernova in 2014, skyrocketing from relative obscurity to a fourth-place finish at the World Equestrian Games in Normandy, France, it seemed like they burst onto the scene out of nowhere. In fact, the journey was 13 years in the making—and a bumpy one at that.

Verdades, Graves now effortless-looking ride, has never been any easy horse to develop, despite their early start together. At one point, she nearly threw in the towel altogether.

These are 13 things you may not have know about “Diddy.”

Graves saw a video of Verdades at three weeks of age and again at three months. From the beginning, it was his natural balance that appealed to her.

“He was really powerful and just very sure of where he put his feet, even though he had his tail straight up in the air and this wild look in his eyes,” says the 28-year old. “He was running around with his mom in the paddock while they were taking the video and every little turn he was just so balanced.” Laura Graves and Verdades at the 2015 Pan American Games.

When Diddy landed in America at six months of age it took three men to get him on the trailer.

“It was very clear that he had basically been put in a halter to get on a plane and come to us. He had no concept of leading and he was very sensitive, so even though he didn’t know, he never wanted to put pressure on the lead rope,” recalls Graves.

“To this day, when he freaks out or does something silly, he won’t ever pull on the lead rope. He’ll kind of dance around you. But hand grazing is another story. He’ll drag you all over.”

Horses generally spook at things like plastic bags, garbage cans, and umbrellas. For Diddy, the world is an ever-evolving list of terrors.

“If he was okay with something yesterday, tomorrow he may act like he’s never seen it. The saddle pad eats horses. He couldn’t wear boots until he was six or seven years old because the sound of the Velcro would make him panic and want to lay down. He’s afraid of the mounting block. He’s petrified of his sheepskin shipping halter. He was just really sensitive in ways I had never experienced with horses before,” says the Florida-based rider. 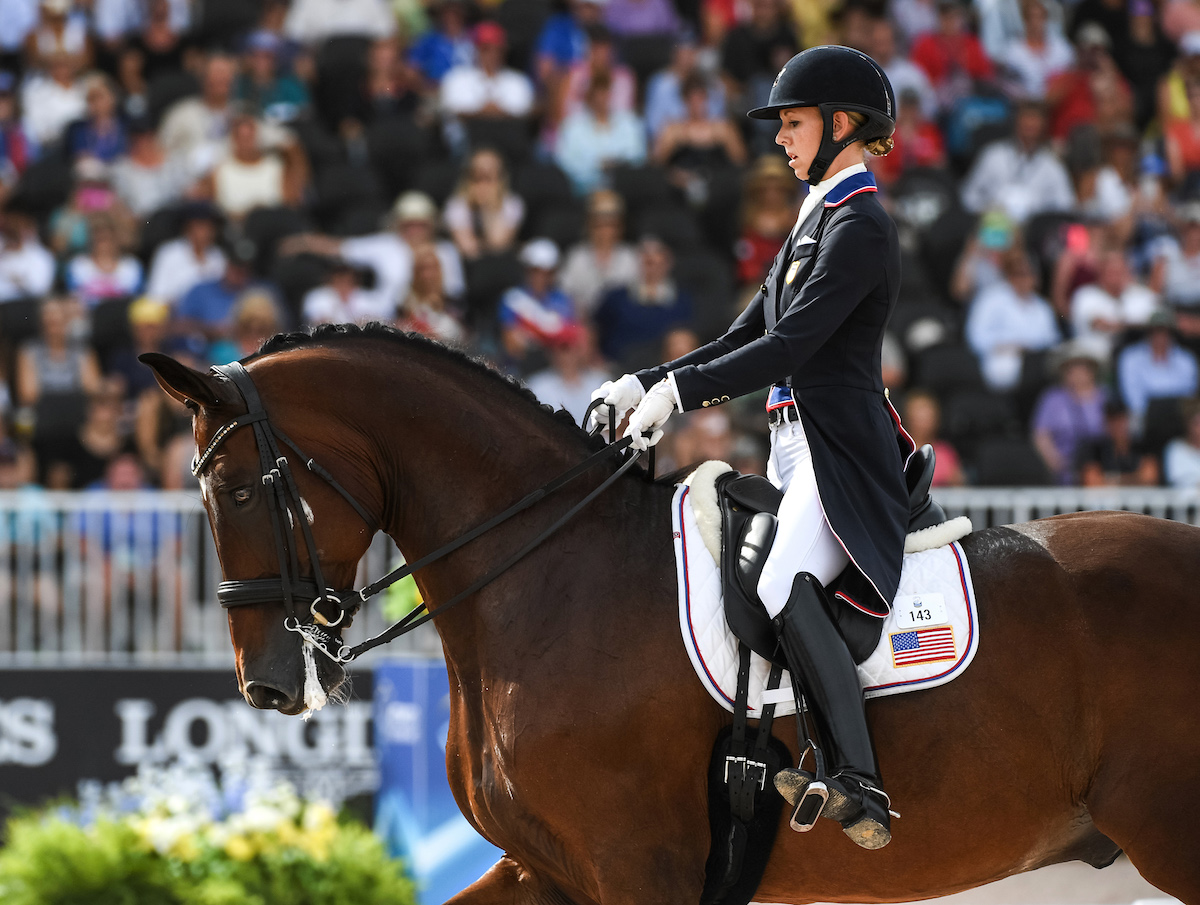 “The thing about him is you can’t get angry [when he overreacts] because he’s honestly afraid. He’s not joking. He’s not trying to get out of work. He’s honestly terrified. He really taught me to listen to the horses,” says Graves.

Spurs, clumps of dirt, it’s all the same to Diddy—harrowing.

“Wearing spurs for the first time, he just launched me. I actually fractured my back,” says Graves. “Cantering, he’s such a big mover he would scoop the dirt with his hoof and sometimes it would hit him in the belly and he’d completely lose it. It was never to get me off. It was because he was panicking about something. He’s just an interesting character like that.”

6. At four, Graves and Diddy nearly went their separate ways

7. To this day, fewer than five people have ridden him

Graves was the first person to ever sit on Diddy and she’ll likely be the last. The trainer she sent him to be sold couldn’t even get on. “She called and the first question was, ‘You’ve been riding this horse?’ He wouldn’t even let her put her foot in the stirrup. She told me, ‘If you really want to sell him I think you need to put the time in to get him to a place where he’s safe for someone else to ride.’”

8. Some days, even Graves couldn’t get on

“Sometimes we would just lunge him and if he was super wild, we’d put him back in the stable. You couldn’t make a big fuss because if you did, someone was going to get hurt. He probably broke five bridles,” admits Graves. “You’d get him all tacked up and he’d be gone.” 9. For such a big horse, Diddy is short on confidence

“When he was younger, he’d have real anxiety leaving the warm up with the other horses and have to go all by himself,” she continues. “He’d call all through his test. He’d never do anything naughty. He wouldn’t throw his head up. If you watch the video, you’re not even sure if it’s him. But it was nerve wracking. So getting him to the point that he was okay in his work that he didn’t care that he was all alone that was a big turning point for us.”

10. But he has a sense of humor about it

Now Diddy is able to relax and focus through a test. But sometimes on the way out he’ll hazard a whinny, just because. “It kind of got to a point where all these things you worked really hard for just kind of worked. He went nice and round into the bridle. He went off the leg. I remember riding my horse before him and just dripping sweat all the time, working so hard every single second. And Diddy was just kind of like, ‘La, la, la.’ He’s just really a nice ride,” says Graves.

“There were still days when he’d buck me off and I’d think what am I doing? But that’s probably what kept me going. I was able to really appreciate him as a riding horse, so you deal with those things that make you want to pull your hair out.”

12. Because he’s a unicorn among horses

“When he’s really brave and does magical horse things like allowing you to fly spray him, he’s a unicorn,” she jokes. “He’s so gifted in some ways, you think he is magical. But you have to look at him like he comes with this other side, which is also magical, but maybe people are not always prepared to handle.”

13. And a once in lifetime horse

“I’ll probably never feel this way about another horse,” admits Graves. “It’s amazing. We’re so connected. He’s so comfortable. He’s so good off the leg. I ride a lot of other horses. It’s tough on them to get compared to Diddy. But as far as life goes, you do think ‘Wow, this [other] horse is really good for letting me clip his ears.’”

For the record, Diddy does tolerate clipping now. Just don’t expect him to like it.