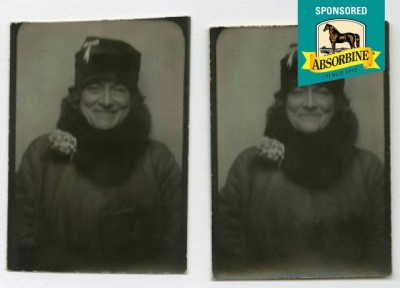 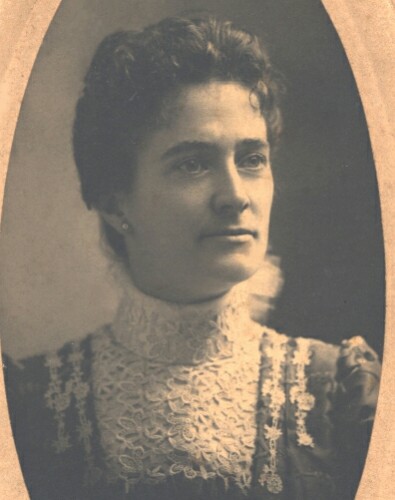 Whether the men of yore like to admit it or not, women have always played an important role in horse history. When it comes to the world of horse care, however, few women (or men) can rival Mary Ida Young’s contribution to the industry. Alongside her husband Wilbur, Mary Ida created the first iteration of Absorbine® liniment when she was just 27 years old. And she didn’t stop there.

In 1892, Wilbur Fenelon Young and Mary Ida Young were a newly married couple living in Meriden, Connecticut. Wilbur delivered cargo and Mary Ida cared for the couple’s horses and home.

In the 1890s, leg paints and blisters were commonly used on working horses. These treatments intentionally blistered a horse’s legs in order to increase blood flow, thereby healing the injured tendon or muscle more quickly. (Blood flow flushes away fluids and reduces swelling, while also bringing nutrients to the injury to speed healing.)

The good news? The horse heals himself. The bad news: leg paints and blisters were caustic on the skin, which not only blistered, but often caused the hair to fall out—a painful process which could lay a horse up for a week or more. Mary Ida did not approve of using such harsh methods on their horses, but Wilbur needed them back on the job quickly in order to keep the freight wagon working. So as an alternative, Mary Ida began to develop a tincture of herbs in her kitchen tub. After applying the tincture, Wilbur and Mary Ida realized that their horses could keep working, without requiring further layups due to hair loss and skin burns. 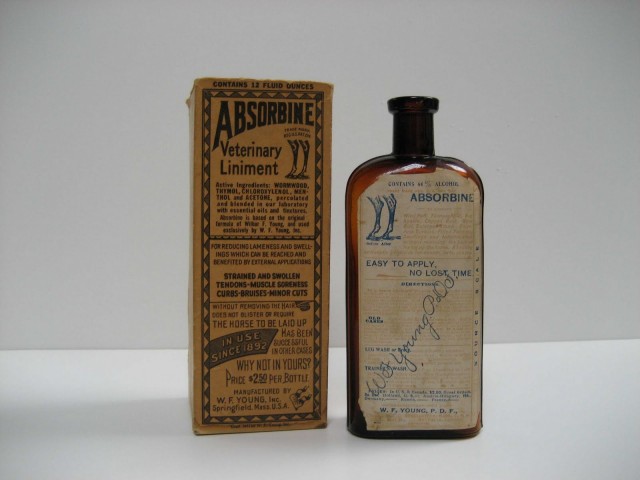 The couple also discovered that their liniment was great at preventing soft tissue strains, while also easing sore joints from arthritis, so their horses could keep moving smoothly. Mary Ida named their concoction Absorbine® Veterinary Liniment, and the couple founded W.F. Young, P.D.F. to market and sell their creation.

Word of Wilbur and Mary Ida’s liniment quickly spread, and Absorbine® began to grow in popularity. After their move from Connecticut, the couple continued to expand the business they started together. For her part, Mary Ida retained an active voice in the company’s day-to-day running, an unusual position for a woman in the late 19th and early 20th centuries. 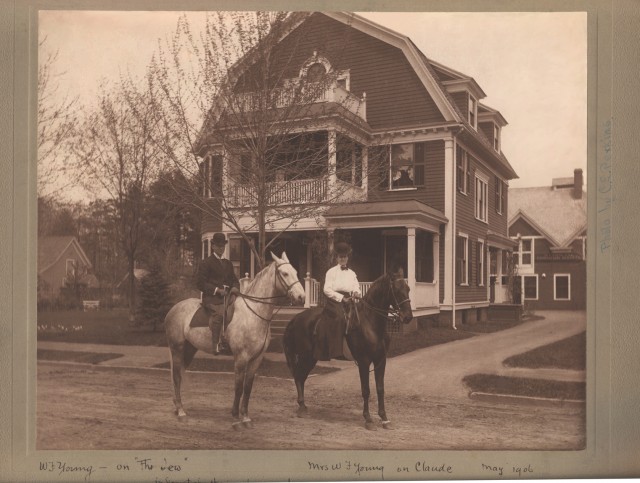 “One time we ran to the back field, [and] Nana called the horses to come up to the fence with a loud whistle. They charged up and stopped two feet in front of her. We were all so scared of the galloping herd that we ran for the fence. Nana stood her ground and gave each horse a sugar treat. At only five feet tall, she had a commanding presence that horses and humans responded to. If she said jump, we said, ‘How high?’” – Jamie Young

In 1918, Mary Ida’s husband Wilbur passed away. Her son Wilbur Young II took over the day to day running of the company, supervised by his mother. Mary Ida purchased an estate owned by her family friends, the Brewers, where she was able to cultivate her garden and her collection of animals. 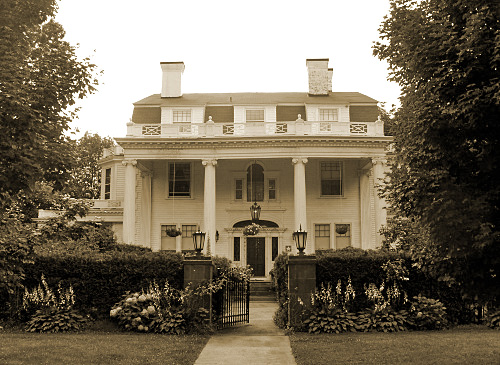 “Nana’s farm had many animals to pet. Her lawn had pet deer and peacocks wandering about. The rock garden had turtles in the pools. Her nine dogs included several Pekinese, two Russian Wolfhounds, two collies, two or three German Shepherds, and an Irish Setter. On top of all those dogs, she had many cats—at least ten.” – Jamie Young

Mary Ida’s estate quickly became the talk of the town. She was known for hosting benefits, horse shows, and popular gatherings. And even as her social standing in the community was on the rise, she continued to run W.F. Young Inc.

“The Widow Young moved into the mansion with many servants in 1922, which began the real glory days of the property. . . Meadowview Farms became the site of many social activities, benefits, and horse shows, as well as a showcase for the black Persian sheep, cows, chickens, and even the creation of a deer farm on the 18 original acres of the estate. The grounds were extensively landscaped and the scene of many garden parties.” – Linda Abrams, Longmeadow Historical Society

When her son Wilbur passed away at the age of 30, Mary Ida herself took over the family business, which she ran until 1957, when her daughter and grandson took over. During her presidency, Mary Ida was able to keep Absorbine®’s sales up, even during one of the most tumultuous times in U.S. history—World War II. Absorbine Jr. proved to be a popular item during WWII for sore muscles and stiff limbs, and it was discovered that the liniment was an effective cure for athlete’s foot, another common malady for soldiers on the front. 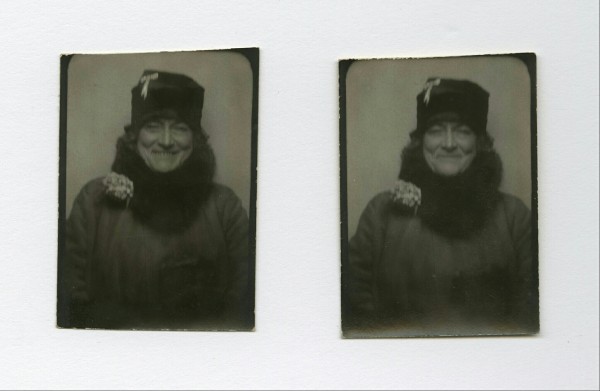 Throughout her life and career, Mary Ida Young never lost sight of what had set her on her journey: horses. Even in her later years, she would bring her grandchildren and her great grandchildren out to visit her stables.

“Nana was proud of her stable, which had cobble stone floors with sand underneath and charcoal under that to neutralize the urine ammonia. Each stall had two windows, cast iron water troughs with water coming out of a lion’s head, and sliding stall doors. Built into the hill under the barn were a foaling stall that was twelve by twelve feet, and a stone-lined water stall.” – Jamie Young 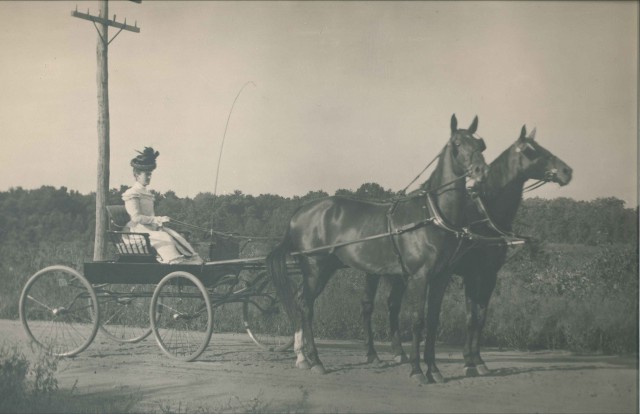 And, even at the age of 90, Mary Ida still enjoyed driving her team and tending to her herd—despite the changing times. Jamie Young remembers that her father worried often that his grandmother would be hurt driving in traffic, including one argument where he reminded her that if the horses spooked, she could have an accident. Like any true horsewoman, Mary Ida responded in kind.

“Nana replied, ‘I’ve been driving my team through town for fifty years, and I’m not about to stop now! They’re good horses and they won’t shy, it’s the people in cars that have the accidents.’” – Jamie Young

For more on Mary Ida and horse care history, head on over to Absorbine®!