“Satan” for Sale: The Best Horse Ad Ever Written 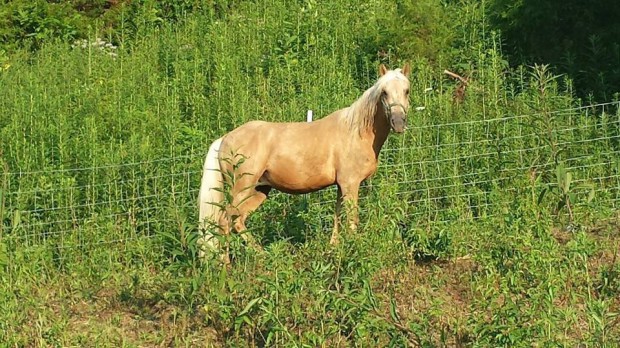 This ad was recently posted in a Kentucky-area “Horses for Sale” facebook group. It appears this pony made quite an impression:

Pony Available at your own risk… Meet Presley (AKA Satan) (Got the first name, Earned the other) American Mutt Pony (AKA Welsh/ QH cross) 3 yr old gelding (still thinks he is a stud) (Gelded 3 weeks ago) 13 hands of fireball He isn’t broke to ride and most days barely broke to lead. ( If you can even catch him) *He ran the streets of Garrard Co for 6 months before Animal Control could even catch him. * He DOES rear buck and kick a little bit. Even a bite on occasion (Especially if you try to touch him) You can pick up his feet (if you have a death wish. )

He would excel as a bronc prospect (for little Cowboys) or maybe to be good at just being a lawn mower. Or ( if you don’t value your life) a trail or show pony.

His drug of choice is Ace.

He also likes eating you out of house and home and getting fat on air.

But he does have some ok things about him. He has that gorgeous color every pays for. He respects fences. He gets along great with other horses. (Especially mares) He is cute as a button. He will remind you to pay your health insurance on time. He loads in a trailer great. (If you can catch him or screw it, just run him in and he loads right up) He loves horse treats (will take them with or without chunks of your hand.) He has had a saddle on once after a tube of ace and a lot of blood, sweat and tears (mostly mine) He is a beautiful mover (while trying to catch him you will see this movement a lot)

So if your looking for your next million dollar mustang project he is your man!!

Don’t miss out on this amazing opportunity to show the world your as crazy as people think you are!!

Free bottle of tequila with purchase! ! (You will need it)

So…tell us how you really feel about your horse, chief. Yikes. Either this truly is a demented animal we’re dealing with here, or, an overmatched owner who bit off more than they could chew when they rescued this “hell-raiser” off the streets, or, a wily horseperson weeding out the greenhorns just looking to make a big splash on their daughter’s 12th birthday.

Luckily (/miraculously), it appears we’ll get to find out. Believe it or not, someone bought this “Satan” pony and has created a facebook page to keep us all updated on his progress through training. How cool is that? Good luck!