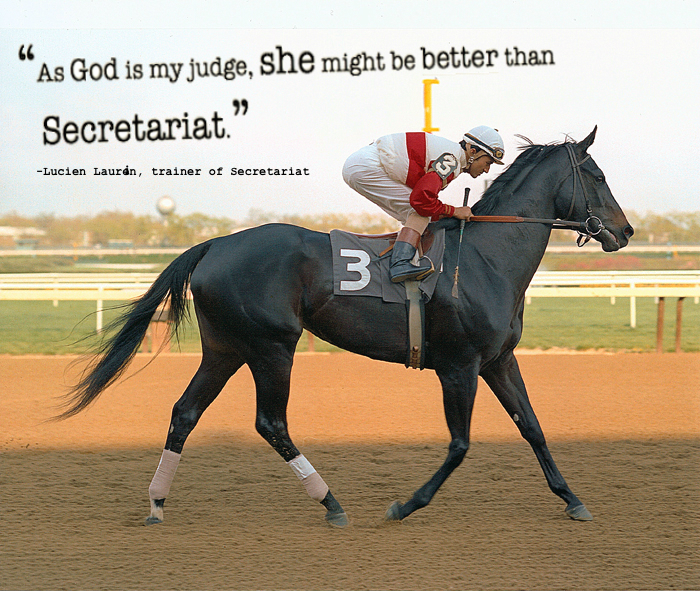 The horse who could not lose strutted onto the track at Belmont Park on a hot July day, 40 years ago. The eyes of all 50,000 in attendance, and tens of millions more around the country, were fixated on the muscled, dark chocolate bundle of legs parading to the starting gate like a vindictive hell queen.

Her name was Ruffian, an unusual title for a filly but there was nothing normal about this thoroughbred. She was unbeatable, until, right there on the track on that July day 40 years ago, she lost everything. 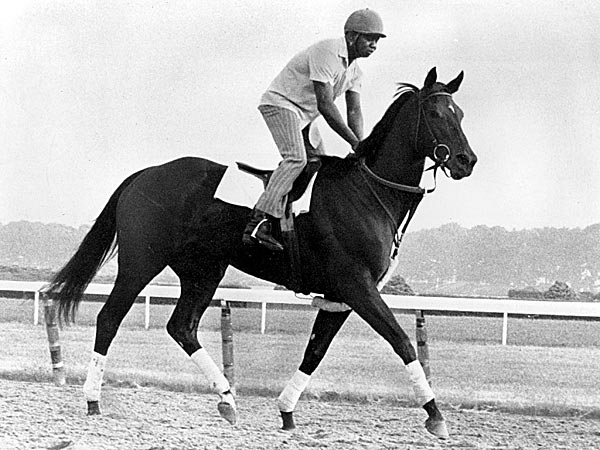 No other horse encapsulates both the triumph and tragedy of horse sport quite like Ruffian. Dark brown to the point of jet-black with the legs of a supermodel and the muscle of a gladiator, she was an exquisite portrait of genetics. Bred by the illustrious Janney family, the daughter of Reviewer (by Bold Ruler) and the Native Dancer mare Shenanigans was foaled in Kentucky in the spring of 1972. She soon towered over her peers, even the colts, and exhibited great precocity and an appetite for speed from an early age.

Ruffian made her racing debut in the spring of 1974 at Belmont Park, a track still smoldering from Secretariat’s unforgettable exhibition in excellence the year before. Most people assumed they would never see anything like Big Red ever again…turns out, they would only have to wait one year.

Not only would Ruffian go on to win her next 9 races, she set or tied the track record each time out and never once trailed a horse.

The filly passed her first test with authority, winning by 15 lengths while covering the 5 1/2 furlongs in an eye-popping 1:03, a track record. She never looked back. Not only would Ruffian go on to win her next 9 races, she set or tied the track record each time out and never once trailed a horse. She won sprints, she won at a mile and a half. She won everything. The average margin of victory in her 10 career wins: 8 lengths.

It was clear the only thing that could stop Ruffian, was, well, Ruffian herself. Both her sire and dam were forced into early retirement with nagging leg injuries, and the promising young filly nearly saw her career careen down a similar road late in her freshman season when she was found to have a small fracture in a hind leg. The injury was discovered the day after her record-smashing score in the Spinaway Stakes at Saratoga, meaning she likely suffered the injury at some point during the race…and still won in record setting fashion. This gal was a fighter, to the end.

Perhaps nothing could stop this streaking black locomotive, after all.

The Fall of Saigon. Oil crisis. Wheel of Fortune and Saturday Night Live make their TV debut. Stevie Nicks joins Fleetwood Mac. Bill Gates and Paul Allen start a computer company called Microsoft. JAWS scares us out of the ocean, and Ella Grasso becomes the first woman to be elected Governor of a state (Connecticut). Yes, a new tidal wave of feminism was cresting across the nation in the early 70’s, highlighted by such landmarks as Roe v. Wade, Title IX, The Women’s Education Equality Act and of course, Billie Jean King acing Bobby Riggs in the Battle of the Sexes.

While We the People were busy busting down barriers of equality, feelin’ groovy and dressing like clowns, the legend of Ruffian was growing with each passing furlong. With Secretariat now on stud duty, the Sport of Kings was ruled by a Queen. Fully healed from her leg injury, Ruffian returned to the track in April of ’75 and looked as unstoppable as ever. She swept through the “Triple Tiara”, the distaff version of the Triple Crown, and with little left to prove against her fellow females, a public push was made to match Ruffian against the colts and keep those Rosie the Riveter vibes rockin’ and rollin’. The New York Racing Association hatched a plan to pit the super filly in a match-race against that year’s Kentucky Derby winner, Foolish Pleasure, in its own version of the Battle of the Sexes.

Neither Frank Whitely, Ruffian’s trainer, nor the Janneys were keen on the idea of a match race, but in an era where horse racing was still as much about sport as para-mutuel handles and breeding rights, all parties eventually agreed that the nationally televised showdown would be a boon to the greater good. The two champions would meet at Belmont Park on July 6 in a 1-1/4 mile duel with a $125,000 check awaiting the winner.

The deal was made, the plan was set and the hype commenced.

Although uncommon, match races were certainly nothing new in horse racing. Some of the sport’s all-time greats had dueled it out on the track, famously Man O’ War and Sir Barton, Seabiscuit and War Admiral, Alsab and Whirlaway and Swaps and Nashua, to name a few. But this one would be special. This one would pit a filly against a colt, live on national TV.

With Secretariat now on stud duty, the Sport of Kings was ruled by a Queen.

Of the 20 million tuned in as the two horses loaded into the starting gate at Belmont on that hot July day 40 years ago, it’s likely few had ever seen a match race, but most knew what to expect: the dark filly would barrel out of the gate, unleash that long, effortless stride and seize the lead, ultimately breaking her rival’s will and pulling away just as she had done every single time before. The horse who could not lose, would not lose today.

Then, in the snap of a foreleg, it was all gone.

As the two horses fought side by side in a blazing opening quarter, Ruffian began to pull ahead when suddenly her right ankle crumbled. Her proximal sesamoids in her right foreleg shattered as she switched leads, and Rider Jacinto Vazquez fought hard to pull the indomitable filly up, each step compounding the trauma. Vets were on the scene within seconds, including Dr. Manuel Gillman, who had remarked earlier in the day after inspecting both horses that Ruffian was “the finest anatomical specimen I’ve examined in 20 years as an NYRA vet.” Foolish Pleasure continued to ease on down the homestretch and across the finish line as the 50,000 stunned spectators greeted him in eerie silence.

Once her leg was immobilized, she was loaded onto an ambulance and whisked off to the clinic where, to the eternal optimist, the battle was only beginning. But to the realist, the fight had reached a catastrophic conclusion.

Surgeons worked through the night to piece the brokenness together, perhaps salvaging one last improbable stand. However, when the filly awoke from her post-surgery slumber in the recovery room confused, confined and traumatized, she violently thrashed around on the ground, causing even more damage than before and leaving veterinarians with no choice but to administer one final shot of humanity.

The horse who could not lose, the Queen of the Fillies, was dead.

Ed. note: Local horseman Raymond DeStefano was one of the first to arrive at the clinic that evening and was in the recovery room with Ruffian and Dr. Jim Prendergast, staying with her until the end. In an article published on Past the Wire, DeStefano offers his account of the filly’s final moments in an attempt to clarify “inaccuracies” in Ruffian’s story:

“She was not running, or trying to run, as has been reported. She was kicking and thrashing and struggling with her predicament. Primarily she was trying to instinctively get up. She didn’t think she was still racing as has been said. She was panicking and in shock.”

The next day, Ruffian returned to Belmont Park where she was laid to rest in the infield near the finish line. In the wake of her grisly, nationally televised demise is a legacy of improved protocols and safety measures for treating injured horses. The newly christened Ruffian Equine Medical Center sits just across the street from Belmont Park. And match races, once an industry hallmark, were rendered obsolete.

Yet, the enduring memory of the great champion called Ruffian is ultimately one of brutal sorrow; the constant reminder that the line between triumph and tragedy, even life and death, is but the width of an ankle.