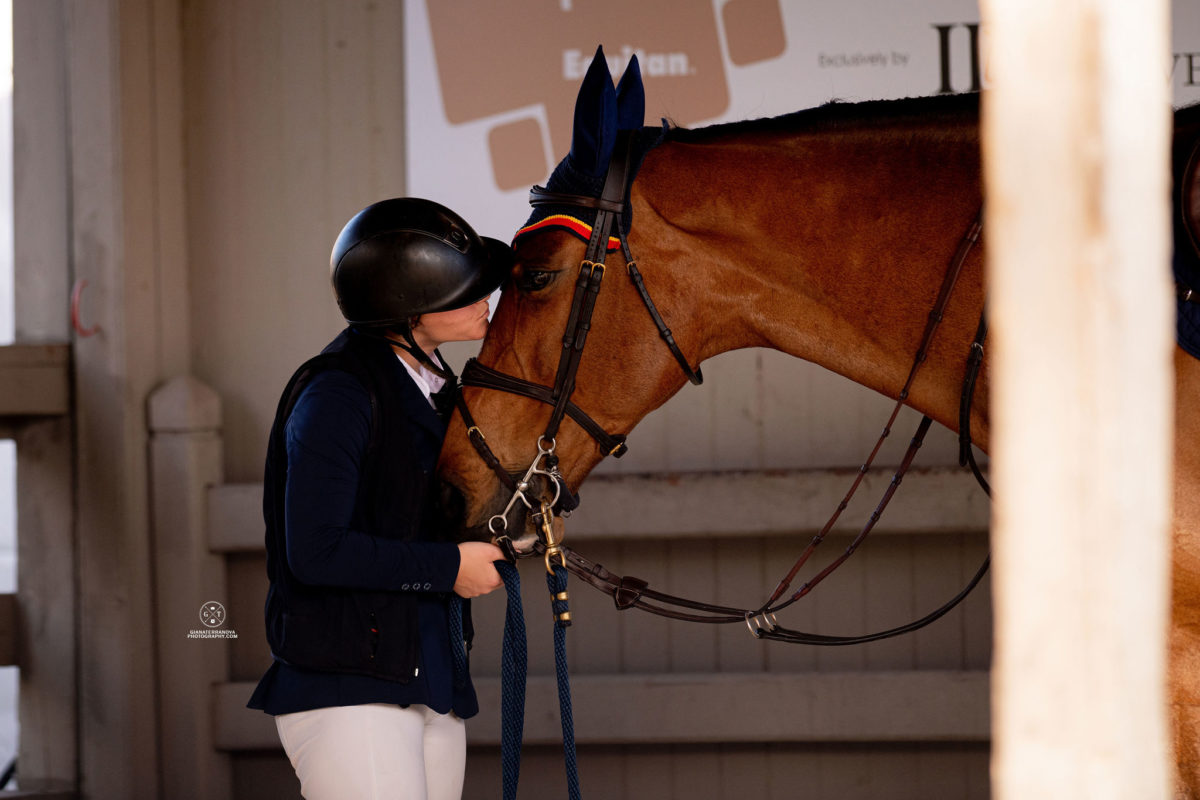 “For a little while our partnership was a bit ‘Jesus take the wheel’,” said Corinne Sweeney (USA) of her now heart horse, 12-year-old mare Tara M.

Previously campaigned by Olympian Lauren Hough (USA), 18-year-old Sweeney acquired the ride in March of 2021 and jumped right into action under the direction of Darren Graziano (USA). With the right team, it didn’t take long before Sweeney and Tara built a foundation of trust and accomplished some Grand Prix sized goals.

“I jumped my first Grand Prix last year. There were definitely nerves because it was a bit of a last minute decision, but Tara had given me so much confidence. We were like, ‘Oh, there’s this class. It’s not going to be huge, huge and I think I could do it.’”

The (allegedly) not-so-huge class in question? The $100,000 Grand Prix at HITS. Yet despite the nerves, and her maiden Grand Prix being one of national distinction, Sweeney and Tara had one of the best rounds of their life.

“At that point, I’d come so far and trusted her so much that I knew if I made a mistake she would always be for me. It was a little nerve wracking, but I rode probably one of the best rounds I ever rode that day, and it was extremely exciting,” said Sweeney.

The pair also found success in August at Traverse City Horse Shows for the North American Young Riders Championships, winning the 1.40m Individual Final. Yet Sweeney will tell you that these recent triumphs aren’t hers alone, but something shared by a whole team.

“[Graziano] is amazing. I started with him just doing the ponies and I was so determined to do the jumpers, even though it was a huge learning curve. We’ve always just had a great relationship working together forever,” said Sweeney, having trained with Graziano since she was 12-years-old.

“I’m a completely different rider from what I was. He is not only working to make me the best rider that I can be, but he is the first person teaching me overall how to navigate the industry and do what’s best for my horses all the time.”

Their long term relationship has evolved into an unspoken understanding of exactly when to assert guidance or inspire independence.

“Aside from horses, Darren’s passion is to teach people. He explains things so clearly and he knows me so well at this point that he knows exactly when to push me and when he needs to back off and let me make my own decisions,” said Sweeney of Graziano.

The other instrumental figure at the in-gate is her groom, Teaghen James, the glue of Sweeney’s team.

“Teaghan has been Tara’s groom since I’ve had her. She is absolutely fantastic and I would be nowhere without her. She’s taken such good care of both Tara and me for years.”

Like many young riders, Sweeney has ambitions that involve the U25 divisions and beyond, but she also understands the value of education and as a University of Virginia student she has her nose in a book whenever she’s out of the saddle.

“I do love school so much. I’ve always really valued that.”

As a JustWorld International (JWI) Ambassador, her appreciation for academics is especially pertinent as of late. In December, Sweeney took part in the JWI End of Year Fundraiser supporting their United States project, which provides books and other educational materials to Pioneer Park Elementary in the disadvantaged community of Belle Glade, Florida.

Sweeney and her fellow Ambassadors raised more than $30,000, which will ensure the continuation of Pioneer Park’s now thriving reading program. The young philanthropist knows not to take something as simple as a book for granted.

“One of the reasons I love JustWorld is that their central focus is making sure education is accessible to everyone. I think a lot of people, especially in our industry, are so privileged and don’t realize what it means to have access to books like this,” said Sweeney.

“I grew up with a million books. I have a very big family and we have stacks and stacks of children’s books. Yet there are some kids who didn’t grow up with any, and it’s eye-opening. That’s why this cause is so important to me.”

Her commitment to giving back doesn’t end with the conclusion of the End of Year Fundraiser. Sweeney is also a talented artist, and created a business of painting shoes to raise money for charity, including JustWorld.

“People realize it and acknowledge our privilege, but not to the extent that we could. There’s a lot more we could be doing, and I would love to be just someone who can really endorse that, not just through riding, but also hands on and really feel like I’m making a difference with them.”

All photos courtesy of Corinne Sweeney