Oh Christmas Tree, How Lovely Are Your Horses 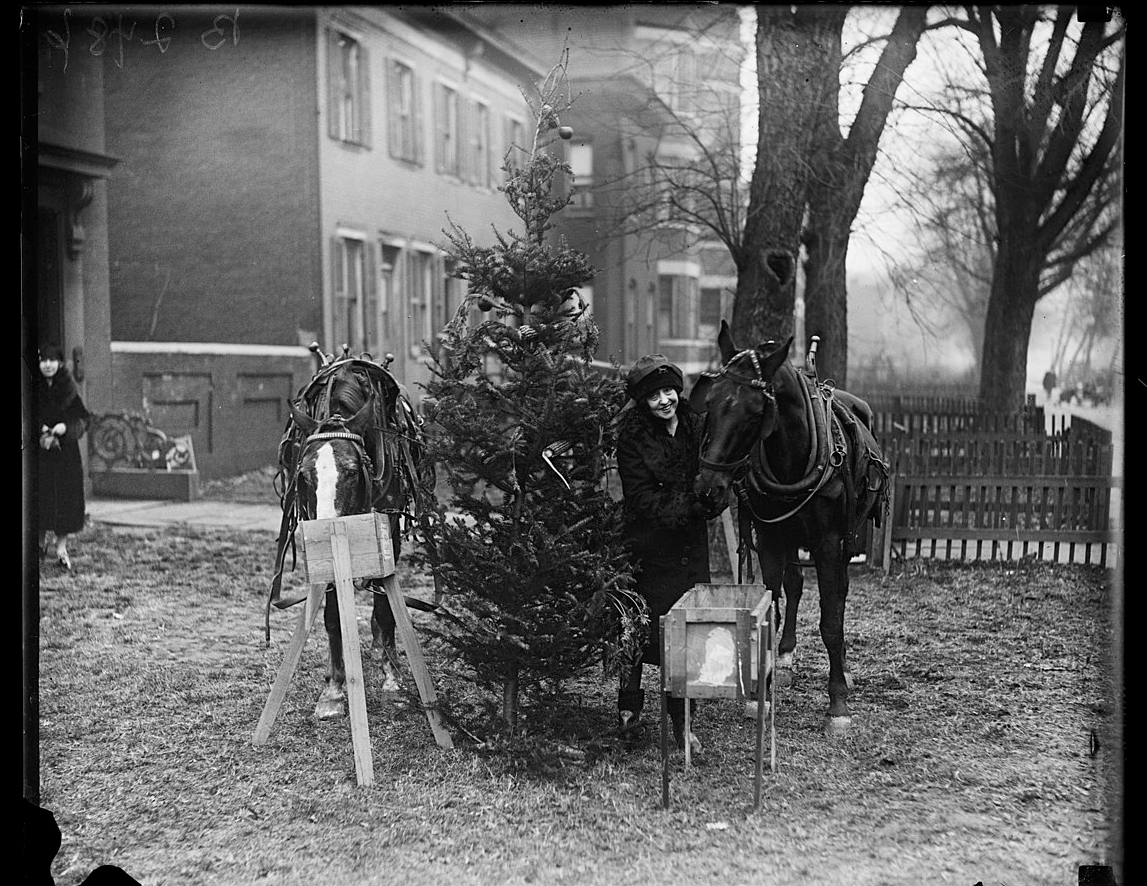 As we know horses have been helping humans do pretty much everything for centuries. Without them, we would have nothing.

All over the world horses have helped shape industry and economy in cities and towns alike. They did this because we asked them to pull plows, wagons, carriages and everything else we couldn’t manage on our own.

But when motor vehicles started filling the streets, our beloved horses were being made redundant. Without a job to do they were often neglected and forgotten, as they weren’t keeping themselves in oats, as it were.

Thankfully, there have always been big-hearted people in this world willing to help those less fortunate. During the Christmas season in 1919, there was a spectacle brewing in Boston’s Post Office Square. Within the square, there was a Christmas tree, which in itself wasn’t that unusual, but there were barrels of apples, bushels of oats and workhorses surrounding the tree eating those apples and oats.

People began to gather around to see what was going on. Someone arrived with a truckload of carrots, and though he didn’t own a horse because he owned a truck, he asked if people could help him unload the 50 crates of carrots that he was bringing for the horses. And you know what? Not only did everyone begin to help unload the carrots and cut them into bite-size pieces but also fed them to the horses.

Having workhorses hang around a Christmas tree in a square offered the public the opportunity to feed the horses carrots and pet their soft noses. It also allowed the public to understand that these beasts of burden were kind, gentle animals that deserved the same love and attention as any animal or human.

This was only one of several equine-themed Christmas parties held in the United States. Other cities such as Detroit, Kansas, Baltimore and Washington, D.C. were doing the same thing with the intention of bringing awareness to the poor living conditions of some workhorses and offering the animals a little reprieve over the holidays and adding in some cheer.

The American Society for the Prevention of Cruelty to Animals (ASPCA) was founded in 1866. Henry Bergh, an American Diplomat, was stationed in Russia and at some point, in 1863, saw and stopped a carriage driver from beating his fallen horse. Bergh realized then that his calling in life had more to do with preventing animal cruelty than it did with doing diplomatic stuff. He resigned from his post, moved back to New York and three years later the ASPCA was founded.

It was the upper-classes and the upper middle-classes that were creating humane societies, with one of their main focuses being workhorses as the public was familiar with seeing them working in the streets and treated in differing ways. Some owners respected their horses and cared for them as a partner, while at the other end of the spectrum some treated them as nothing more than a commodity that didn’t deserve special care or attention.

Horse Christmas Tree parties differed from region to region, but the constant was a horse-friendly menu, a Christmas tree and food for humans and supporters. It was the perfect way to draw attention to the needs of workhorses and animals in general, but it also brought about public support which aided legal changes such as passing anti-animal cruelty legislation.

In later years the Washington Animal Rescue League, with the help of donations, drove around in a festively decorated truck filled with alfalfa and searched for horses in need of food. A few years later the same organization, once again with the help of donations, set out to buy lame, elderly and mistreated horses that could no longer work and gave them a place to retire.

Each year the horse Christmas tree parties grew and did so until WWII, when life for everyone changed.

Thankfully today there are countless organizations and people that keep a keen eye out for animals in need. We may no longer hold these parties, but our hearts are still in the right place.

And who knows, maybe someone will hold an all-animal-inclusive Christmas tree party in a town square near you.