The History of Horse Trailers 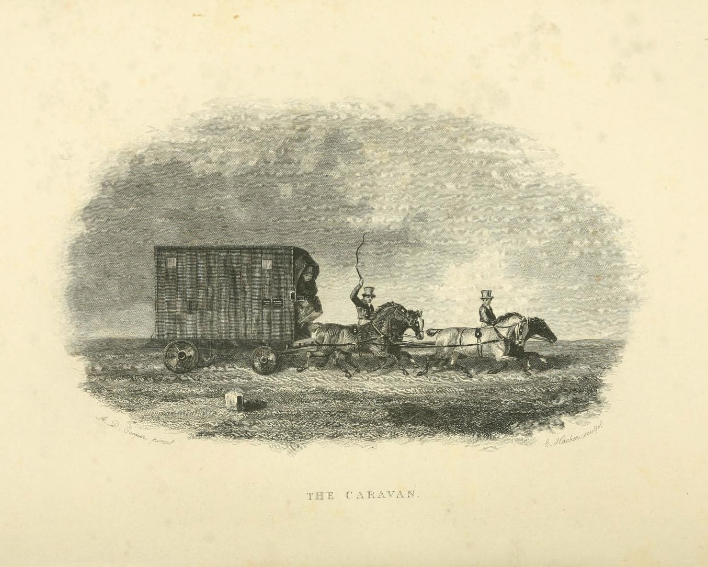 When I was sixteen and first learning how to drive a truck and trailer my mom was my educator, for better or worse.

Driving straight ahead, as you know, is uncomplicated, it’s the backing up part that takes a little time to figure out. Whenever it came time for me to park the trailer, whether at home or a horse show, in an attempt to make me laugh or deescalate my anxiety my mom would say, “Give me forty acres and I will turn this rig around.” She had an idiom or a quip for every occasion.

The line is from a song released in 1964 by the Willis Brothers entitled, not surprisingly, Give me Forty Acres.

Remembering this got me thinking about the history of horse trailers. And, of course, there is that meme floating around.

Moving horses around today is a relatively easy thing to do. You hook your truck up to your trailer and off you go. We even have several different options as to which way we might want to transport horses which is largely dependent on headcount and/or income. We’ve got the bumper-pull, gooseneck, semi truck/trailer or British-style lorry.

Lorry is an unusual word for a semi, but then again, semi is fairly unusual as well. Maybe you call them big rigs or 18-wheelers if you want to sound like you’ve watched Smokey and the Bandit.

This is a rabbit hole I’ve unintentionally gone down, but I think I can fully answer a few questions you didn’t know you had.

Lorry – not to be confused with Lori, Lory or Lorie or any other versions thereof.

A lorry is the British version of the North American semi but it can also be an all-in-one truck/horse trailer much like an RV with room for your horses rather than your golf cart.

The word lorry comes from the British Railway in 1838, which seems an oddly specific date, but
I’ll take it. Everyone is just guessing here, but the word likely derives from the 1570s verb lurry, which means to pull or tug. Sounds good to me, one query solved.

Semis, we all know them and we all fear getting stuck beside one on the freeway. They seem to pull you in as you near and spit you out when as you depart. They are fast-moving and slow-stopping juggernauts, with an ironic name.

Semi is of Latin origin meaning half or partly, partial…but when we think of a semi-truck it looks like a whole lot of something, nothing half about it. Turns out the word semi is referring to the trailer not the truck part of the equation. Why is it called a semi-trailer when that too, looks pretty full on?

It has everything to do with axles. I’m sounding very mechanical here, which I can assure you I’m not. A full trailer sits and rolls down the road on both its front and rear axles, hopefully with a truck attached at the front.

A semi-trailer rolls only on a rear axle as it has no front one. To wit, a semi-trailer has half the number of axles in which to barrel down the highway, hence its name of semi-trailer. The truck (or tractor) carries the other half of the trailer, which is why it can go without a front axle.

When I first thought I should write about the history of horse transportation, I thought of only trailering them. I suppose because that’s what I am used to and therefore that is what I will focus on. I could launch into when horses first started getting shipped overseas, riding on trains or getting moved about on hoof, but then I would have to change the title of this post.

For a long time, horses were the vehicles, which is why a car’s power is measured in horsepower and not, say, pigpower or windpower, or something like that.

According to the book, The Pictorial Gallery of English Race Horses, written in 1850 by George Tattersall, the first horse-drawn caravan in which to transport a horse was used in 1816.

Mr. Territt, a racehorse owner and general farmer, had employed a trainer who went by the name of John Doe (I kid you not). Territt had entered his horse Sovereign in the 2000 Guineas Stakes race in Newmarket, which was some distance from his home in Red Marley. Doe suggested that the horse be shipped to the race much the same way Territt took his cattle to sales, in a caravan.

Doe, who must have been much admired by his boss, further suggested they add some springs to the axles and padding to the interior, which was done tout de suite.

Sovereign arrived at the race fresh-faced and ready to run in half the amount of time it would have taken him to walk. Three heavy horses pulled the caravan which covered 40 miles a day. I guess that is how fast a three-horsepower mobile travels.

The second sighting of a horse caravan was in 1836 when Lord George Bentinck needed to get his horse Elis 200 miles down the road to run in the St. Leger Stakes race. Bentinck, displeased with the odds that had been placed on his horse, needed a cunning plan. Luckily for him, he had hired John Doe, who once again proposed the idea of hauling the horse to the meet.

To onlookers, it seemed as though Bentinck may not run Elis in the race as he had made no move to get him there, via hacking those few hundred miles. This had the bookies believing either the horse wouldn’t run or if he did would be far too tired to win. And just like that Elis’s odds grew longer and longer and Bentinck, with an ace up his sleeve, placed a sizeable bet on his horse to win the St. Leger.

Elis won the race and doing so with such appalling odds made the idea of transporting horses to the meets a rather appealing option.

Now, in 1902 horse vans did become motorized, but not commercially, that started in 1912, but because it was 1912 the vehicles lacked the gumption to travel long distances. It took another 40 years before a vehicle was designed that could travel long distances pulling and/or carrying a heavy load.

Amazing to think that this type of vehicle has only been around for approximately 70 years.

So, thank you, John Doe, for your clever idea and Lord George Bentinck, for your conniving ways.