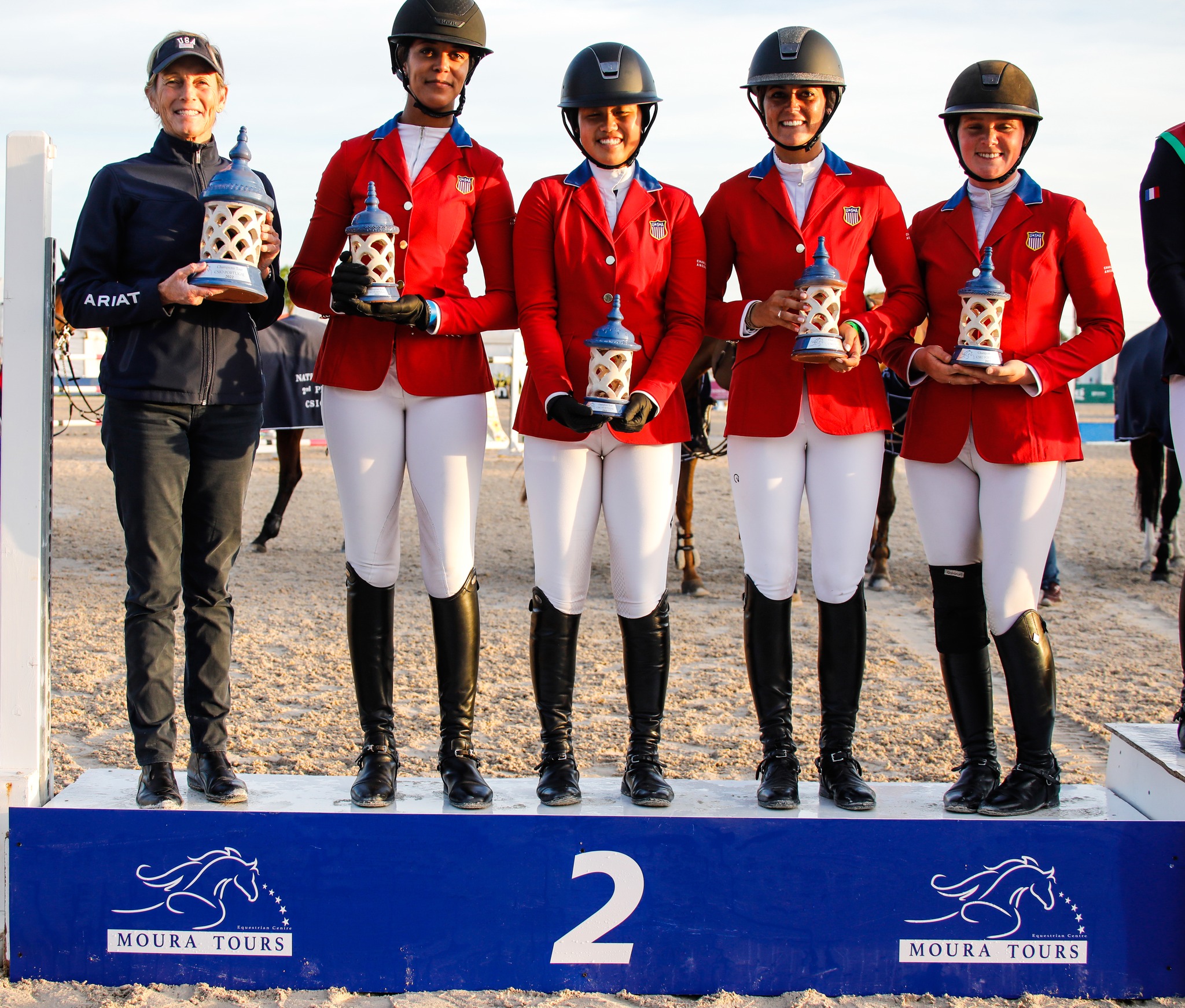 They may have come away with silver, but the U.S. Show Jumping Team at FEI Jumping Nations Cup Vilamoura CSIO3* looked good as gold in Portugal this weekend.

France rode away with the top spot on a total of eight faults in a competitive, 14-team field, with the top 10 countries returning to jump in the second round. But there was no shame in the U.S. game on Sunday—far from it.

There, the four-woman team comprised of Kelly Arani (24) and Impossible Dream, Cathleen Driscoll (29) and Arome, Mimi Gochman (18) and Celina BH, and Mavis Spencer (31) and Carissimo 25 finished on an impressive 12-faults under the guidance of chef d’equipe Anne Kursinski. Ireland took bronze on 18.

“It was a really wonderful, cohesive group, including the grooms and the trainers,” Kursinski said. “It was a [complete] team effort, which is great to be part of.”

Spencer and the nine-year-old Holsteiner gelding, “Curly”, led the team an impressive double-clear performance, one of only three in the day’s competition. Curly, according to Spencer’s Instagram, was purchased in 2021 as an equitation sales horse, but quickly proved he not only wanted to stay on, but had a different job description in mind.

“Heading home with the fullest heart and so grateful for the last few weeks of experiences,” Spencer posted on Instagram, promising a further, “sappy, unpacking of the experience post will be coming shortly.” (We can’t wait, Mavis!)

Mimi Gochman and the 12-year-old Holstein mare, Celina BH, also had an impressive day, finishing strongly for Team USA on 0/4.

This is the second go-around for this young #girlpower squad, which previously competed together at CSIO3* Vejer de la Frontera in late October.

“They all put in great rounds today. I think they’ve come a long way since Vejer, getting that first one under their belts,” said Kursinski, who called Sunday’s field ‘extremely competitive.’ “They were all first-time three-star Nations Cup team members [at Vejer], so I think everybody was a little more relaxed and confident today.”

Kursinski also unscored the importance of mid-level events like Vilamoura and Vejer de la Frontera in helping to develop the next generation of U.S. Team riders.

“There’s just no substitute for this kind of experience,” she said. “For athletes who want to get on a Wellington team or one of Robert Ridland’s CSIO5* teams, you’ve got to get your feet wet in these three-stars.

Experience it, to be sure, but a little silver in your pocket doesn’t hurt either. Bravo, Team USA!