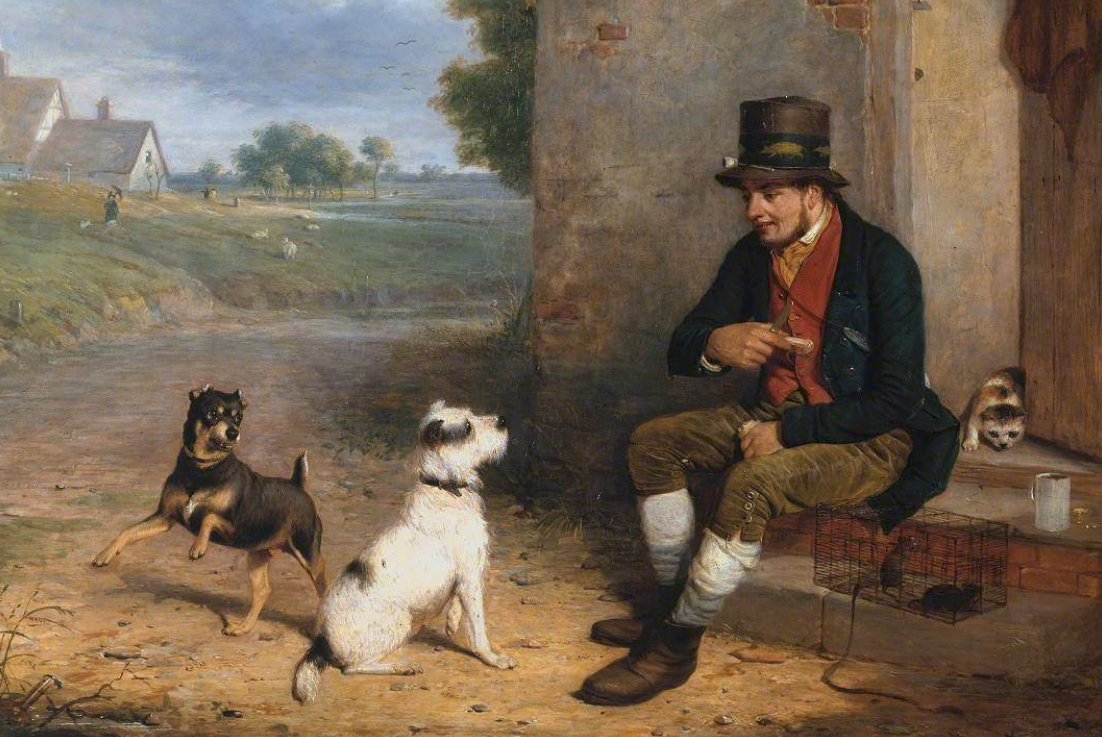 Ratcatcher. What a great word. As always, this word said in the general public would conjure up a very different image than if the word was spoken at a horse show.

From what I’m able to ascertain when reading the dress code from various hunt clubs in North America and the UK, the term “ratcatcher” refers to both a shirt and hunting attire that is worn during the informal hunting season.

“I need to put on my ratcatcher. Where’s my ratcatcher?” We say the word like it ain’t no thing, but it is a thing, and it doesn’t make any sense. We just roll with it because the horse world is so full of oddities. There is simply not enough time to ponder the wonders of our world.

Well, I have the time, so I’ll do the pondering for all of us.

Working my way to the source of it all

Now, if we are referencing a dog, say a Rat Terrier, ratcatcher is quite fitting because we know Rat Terriers are bred ratters. But in reference to an item of clothing that we do up tightly around our necks it’s just weird.

“What is the dress code for this hunt?”

I can’t say I have used the word in this way, but far be it from me to pretend to know everything. Now, during the formal hunting season, it is expected that women wear a ratcatcher shirt with a neckband which assumedly is the same thing as a choker or stock tie.

I always thought the ratcatcher was the choker. The part your mom helped you put on as it buttons at the back, which is confusing. She’d put on your choker gently trying not to strangle you, but once done up she’d wrestle it into position, jostling you.

Your stock pin was clenched in her teeth while she eyed up the straightness. Then she’d take the stock pin from her mouth and begin to force the dull end of the “pin” through the choker and shirt. Getting the pin through both bits of material prevented the choker from spinning throughout the day. But together the material was near impenetrable.

You could sense your mom’s fear through her shaking hands. The potential for the stock pin stabbing your jugular was high. Your fear heightened because both parties knew things could turn ugly, quickly. You’d recoil slightly in preparation. “Just hold still,” your mom would say sharply, which did nothing for your confidence. The pin would fiercely break through the material, narrowly missing your clammy skin.

“There,” your mom would say with a noticeable sigh, “That wasn’t so hard, was it?

At least that’s how I remember a ratcatcher and every horse show morning.

So, we’ve solidified that a ratcatcher is a shirt, and we know from experience that it has a short sticky-uppy collar with one or two buttons on which you place your choker over. However, and this is where things get interesting; way back in the 1600’s, a ratcatcher was a man who set about catching vermin. It was their form of pest control, one rat at a time.

Though his status was surprisingly high in society, he was a plainly dressed man compared to that of the Pied Piper, who I think was a pretty fancy dresser. Our vermin catcher wore a collarless shirt with a neckerchief. Great word that, neckerchief.

It seems the ratcatcher also had his own theme song. There is a tune called The Famous Ratcatcher from the 1600’s that people, apparently, used to sing while merrily dancing in the streets.

Anyway, this is where the name for our show shirts comes from.

Even though I said our shirts have a collar there is a slight chance I may be wrong on that. It depends, I suppose, on your definition of the word “collar”. If you Google images of collarless shirts, paying close attention to the “business” version, you will spot a remarkable resemblance between the shirts we wear and the ones online.

I think we have been wearing collarless shirts this entire time.

The bridge linking the human ratcatcher, to the hunting attire, to the shirt and then to the shirt we wear in the show ring, seems to have been washed away with time. Despite that, I feel we can make some generalized leaps and find our way there.

I did read on the Fox Hunting Life website that the clothing of the ratcatchers, from a few hundred years ago, is similar to what we see worn on the hunts today. Tweed jackets, breeches, and gaiters, which are akin to half chaps. Though they wore gaiters to prevent rats from scurrying up a pant leg and we, thankfully, do not.

Apparently, grooms and farmers of the same era also had to contend with rats and wore the common ratcatcher attire. And this little bit of information at least gets us closer to horses. But from there, as with the pony horses, I have come up empty.

So, for now, until someone digs deep into the annals of ratcatcher history, we are, I’m afraid, left wondering. Which is annoying.

I love a conclusion as much as the next person and will endeavour to reach a full resolution with
the next post. We live in hope.