From the Neck Up 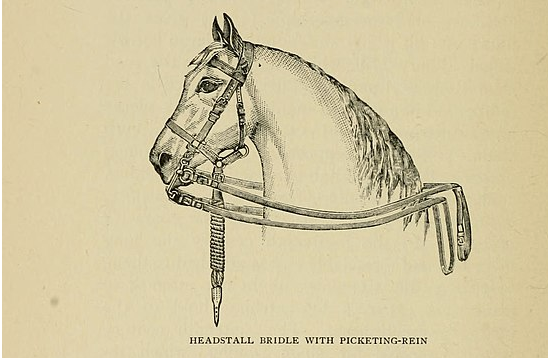 Three terms plucked from my dwindling list of topics. I’m running with the theme of, well, from the neck up.

When we hear the term four-in-hand, we think of four horses pulling a carriage, but perhaps men think of a necktie knot because there is one that is called the four-in-hand. It is, apparently, easy to execute and very versatile as far as knots go.

It’s unclear how I came to learn this name given I don’t often, if ever, wear a tie. Yet here we are discussing it.

It’s hard to not get bogged down in the history of this “mildly asymmetrical” knot when researching its origin. And since we probably aren’t too bothered with the deep history of it, I only want to say, because it’s surprising, that the knot in question has been used since ancient times, allegedly. That is all I will say on the matter.

How did it get its name?

Three theories as to the origin of said knot name.

1. The reins of the four-in-hand carriage drivers may have been tied in this way. I’ve never driven a carriage, but I have tied my reins in a knot, and I’m unsure that this is the method I would use. I set about researching knots drivers may tie in their extensive reins and was unable to find anything.

2. It is thought four-in-hand drivers used to tie their scarves in this fashion.

3. The knot is named after the London Four-In-Hand gentleman’s club from the 19th century. This could well be the case as it encompasses the first and the second theories. The long and short of it is nobody really knows. But what is safe(ish) to say is that once again horses have (probably) played a hand (hoof) in something as arbitrary as a necktie knot.

Admittedly, I have never spent much time thinking about the word headstall. It’s just a part of a bridle. A simple piece of leather that sits atop our horse’s head that acts as a hanger of sorts from which to attach the cheek pieces.

The confusing part of this word is the stall part, I feel the word head needs no further explanation.

A stall, if you recall, is where we like to keep our horses at night and also a stand at a market. You might stall your car, or God forbid your plane, you may stall when needing to clean your stall because it’s a chore you don’t feel like doing right now.

The word is both a noun and a verb, but nowhere does it tell us, as usual, how stall relates to the bridle part.

This piece of leather is also known as the crown piece which makes sense even if we only think of poor Jack that fell down and broke his crown. Your crown is the topmost part of your head, which, uncoincidentally, is where you set your crown, should you be bestowed such a thing.

I got a lot of mixed messages from the internet, which is par for the course really. Some sources say the word is North American and some say it’s English.

Some say the word has been around since the 14th century and others since the 1400’s. One source says it derives from hedstall, which is, in essence, the very same word minus the letter ‘A’.

According to my trusty dictionary, there are 15 different ways in which to use stall but not one of them fits perfectly with or on our horse’s head.

Then, out of desperation, I asked my cousin who happens to like languages and she suggested I turn to the Dutch. What I found is that the Dutch word for bridle is hoofdstel.

Put that together and you get headset, which is ever so close to headstall. Or if you combine the two you get headstel, which isn’t a word, but it looks good in this scenario.

With this revelation in mind, I contacted my best friend from high school who happens to be Dutch, and she said, and I quote, “Yes, Hoofdstel is Dutch for headstall. Hoofdstellen is plural.”

The internet was of no use to me this time, but family and friends, as always, prevailed.

Arabians are one of the easiest breeds to pick out of a lineup, due to their delicate, pretty and dishy faces. What I didn’t know, until watching an episode of the gameshow Jeopardy, is that that recognizable dish or rather the prominent forehead that helps create the dish has a name, jibbah, which is Bedouin for forehead.

After further research, I’ve also uncovered that the concave facial feature is called afnas and the
arched throat latch area is referred to as the mitbah.

The Bedouins, a nomadic Arab tribe of the Arabian Peninsula, bred their horses with these features in mind believing that a more prominent jibbah meant a larger brain, greater beauty and a look of nobility.

And there you have it

We are now all a litter wiser than we were before reading these 800 words of enlightenment.