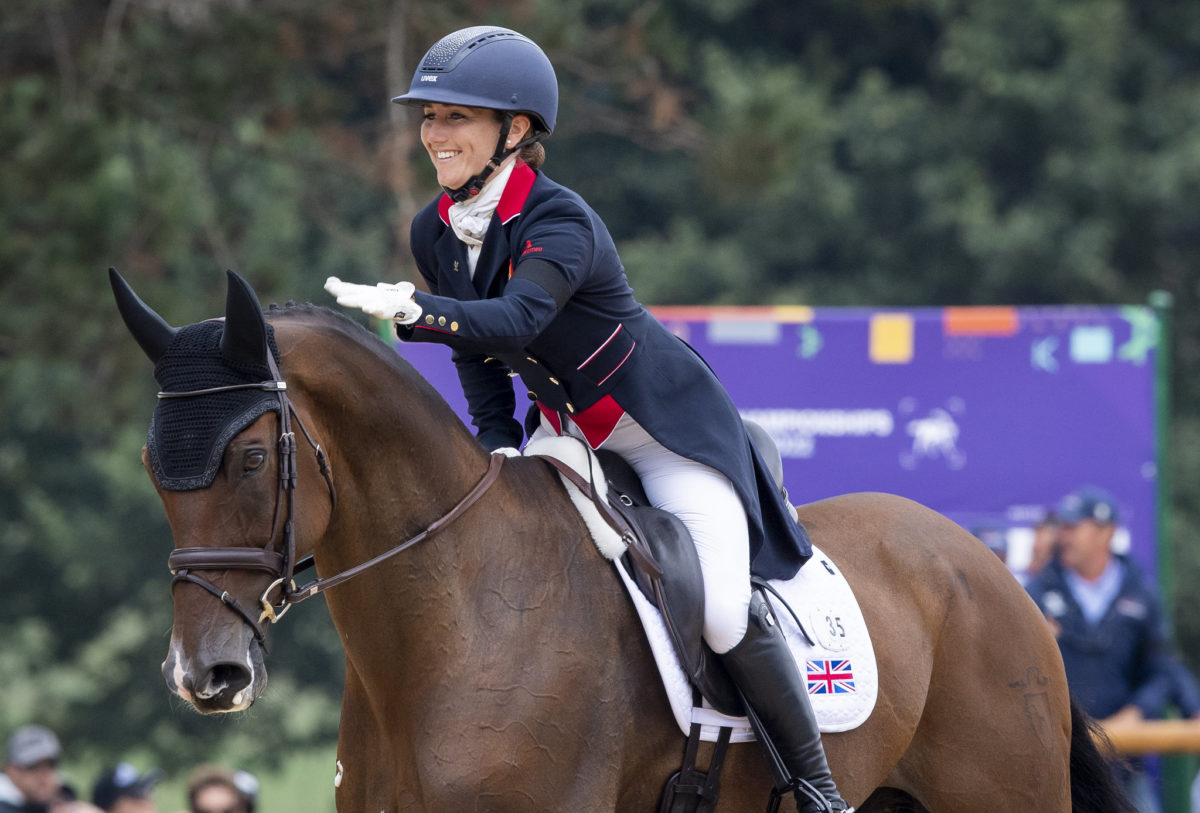 The British team is in the lead after day one of dressage at the FEI Eventing World Championships Pratoni – Roma, but more specifically, London 52.

In the saddle of world number 10 Laura Collett, the 13-year-old Holsteiner had high expectations heading into Thursday. After their record setting win at the Badminton Horse Trials in the UK, where they achieved an unprecedented total score of 21.4, the pressure was on from the moment they went down the centerline.

But if having two of the world’s top three 5* scores ever recorded doesn’t give you the surge of confidence needed to rise to the occasion, nothing will.

“I’m well aware I’m sat on one of the best horses in the world and people expect him to deliver, and luckily he did!” said Collett.

London 52 delivered a show-stopping score of 19.3. Well, show-stopping for now. While the number looks promising enough to hold onto the early lead, the second half of the field are still due in front of the judges in the dressage ring on Friday.

Not to mention, eventing has its crescendo when the shad-bellies come off. Cross country, otherwise known as “moving day” has already raised some questions.

“Sadly, it’s not going to be a dressage competition this weekend. From start to finish the course is full-on and there was a lot head-scratching when we first walked it to decide exactly what the direct route was because there are so many options,” said Collett.

Still, the British perfectionist has set herself up quite well. Despite charming the judges at Badminton for a record score she (and her Olympic dressage coach Carl Hester) had a few notes to add to the bottom of her scoresheet themselves.

“He was pretty good at Badminton, but there were bits that weren’t quite good enough and we’ve just been really working on. Once I got the first centerline out of the way I thought Carl [Hester] will be happy now! From then on he just felt like he was getting better and better and I could just have a lovely time basically,” said Collett.

She wasn’t the only one carrying the British flag to have a good day, however. Competing as an individual, 25-year-old Yasmin Ingham currently holds the second position on a score of 22 with her 11-year-old gelding Banzai du Loir.

Rosalind Canter and 10-year-old gelding Lordships Graffalo competed for the team and ultimately helped push Britain into the lead with a score of 26.2, which was also good enough for fourth individually.

There is still plenty of dressage left to go, but we can’t help but wonder about Guiseppe della Chiesa’s 30-fence track. The riders have had a gander, and the opinions are rather mixed. Though William Coleman (USA) thinks it’s in a good way.

“It seems to me like a balance between a true championship test and a modern look at eventing with a lot of frangible pins that we all have our ideas about but it’s the way the sport is going and we need to choose and produce our horses in that aspect now,” said Coleman.

“There are plenty of different routes to make sure everyone has the possibility to get around and it will require proper cross-country riding with the terrain….I’m really looking forward to it.”