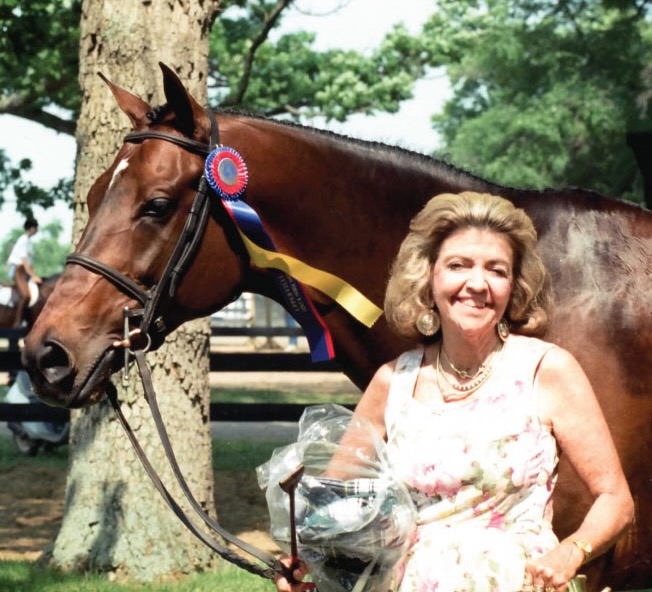 This week, #HallOfFameThursday remembers Elizabeth Busch Burke, Hall of Fame class of 2015, in an article published in the Lake Placid Horse Show program in 1996.

Elizabeth Busch Burke: A Salute to One of Show Jumping’s Greatest Patrons

In and out of the show ring, Elizabeth Busch Burke has made her presence felt in the world of horses. A true thoroughbred in her own right, Elizabeth’s love for the sporting life can be traced back to the unique circle of extraordinary individuals who influenced her life and, in turn, shaped the direction of equestrian show jumping competition in the United States.

Elizabeth has been surrounded by athletes for most of her life. She is the daughter of unforgettable four-in-hand driver and all-around horseman August A. “Gussie” Busch, Jr., who was elected for enshrinement in the Show Jumping Hall of Fame in 1988. She is also the former wife of legendary horse trainer Bobby Burke and baseball Hall of Famer Eddie Matthews. However, the athletes she personally knows best are of the four­-legged variety.

A consummate horsewoman, Elizabeth is Vice President of the American Grandprix Association (AGA) and a member of the Board of Directors of the Show Jumping Hall of Fame, Stadium Jumping, Inc., the Lake Placid Horse Show Association, and several other leading East Coast horse shows.

No stranger to competition, Elizabeth has been active in the hunter divisions for three decades, and is a dedicated exhibitor who works closely with her horses at shows and at home. She cares a great deal about her hoofed partners, and spends as much time as she can at Meadow Bluffs Farm in Virginia, making certain only the best of care is delivered at her stables.

Elizabeth’s ties to Lake Placid’s two premier show jumping classes, the $50,000 Budweiser Grandprix of Lake Placid, and the $35,000 I Love New York Grandprix, run even deeper. The pair of Sunday showcases are member events on the Budweiser/AGA Grandprix Series of Show Jumping. But if it weren’t for Elizabeth, there might not be a series at all.

Back in 1972, Elizabeth arranged for a meeting of the minds between Eugene R. Mische, her brother August A. Busch 111, and her father, Gussie, at the Busch estate in St. Petersburg, Florida.

In retrospect, 1972-1973 would prove to be a period of great change for the sport of show jumping. The Lake Placid Horse Show was inaugurated in 1972, and the next year, Mische helped initiate its first grand prix—the $10,000 Adirondack Grand Prix. Soon after, he signed on as Lake Placid’s first show manager and now, as president of Stadium Jumping, Inc., he continues to play an integral role in positioning Lake Placid among the nation’s best horse shows.

Back at the St. Petersburg roundtable, the discussion revolved around Elizabeth’s convincing her father to have Anheuser-Busch sponsor another early Mische production, the American Invitational. It didn’t take long for Elizabeth to convince her father to sponsor the Invitational, and from there, the ideas steam rolled. Her brother suggested Anheuser-Busch sponsor some type of national show jumping tour, the likes of which did not exist at the time. Elizabeth, who immediately liked the idea, pursued it further with Mische, and the Budweiser/AGA Series of Show Jumping was born.

Due largely to her efforts, the Budweiser/AGA Series has grown from a mere 16 events offering $350,000 in prize money in 1978 to more than 30 events offering a combined purse of over $2 million. In that time, AGA attendance has increased from 60,000 to an audience of a quarter-million. Television viewership has jumped from 184,000 homes to well over a million.

That growth is clearly obvious at Lake Placid, where the $35,000 Budweiser Grandprix of Lake Placid is scheduled to air later this summer over the ESPN cable sports network.

Feldman goes on to explain, “A joint sponsorship with Anheuser-Busch and their local distributor, A & M Beverages of Malone, New York, led to Budweiser being named the title sponsor of the 1996 Lake Placid Grandprix. We are indebted to the company, and to Elizabeth Busch Burke, for Anheuser-Busch’s support of Lake Placid.”

“Lake Placid is simply charming,” says Elizabeth. “It’s like being in Switzerland. People could not be friendlier, and they are extremely gracious to the horse people. The stores fill their window displays with horse items. The food in the restaurants is delicious, and,” she added with a twinkle in her eye, “there is plenty of Budweiser to drink.”

There is no more ardent advocate of her beloved father’s company than Elizabeth. One story goes that she saw a grand prix rider at a horse show drinking a beer from another company, and chided the rider about his choice of beverage. The rider replied he’d be glad to drink a Budweiser if he had one. With true signature style, Elizabeth made certain that less than twenty minutes later, there was a cooler full of icy cold Budweiser at the Riders’ Tent.

Elizabeth is also a good supporter of other horse show sponsors (as long as they’re not non-­Busch beers). Several years ago, when Mercedes­ Benz came aboard as a sponsor of the American Grandprix Association, Elizabeth immediately went out and bought one of their cars. Her powder-blue Mercedes, sporting the license plate “BY BUD,” is a familiar sight to many on Lake Placid’s Main Street when Elizabeth leaves her horses long enough to fit in a little shopping.

“I know every shop in town,” she says, growing more delightfully familiar with both the town of Lake Placid and its natural treasures with every year’s visit.

When thousands of spectators gather around the grand prix arena here this summer, it will be a true testimonial to the treasures Elizabeth has, in turn, brought to Lake Placid: dedication, support, and an abiding appreciation for what horse sports can do for the soul. The traits found only in the heart of a true equestrian and patron.