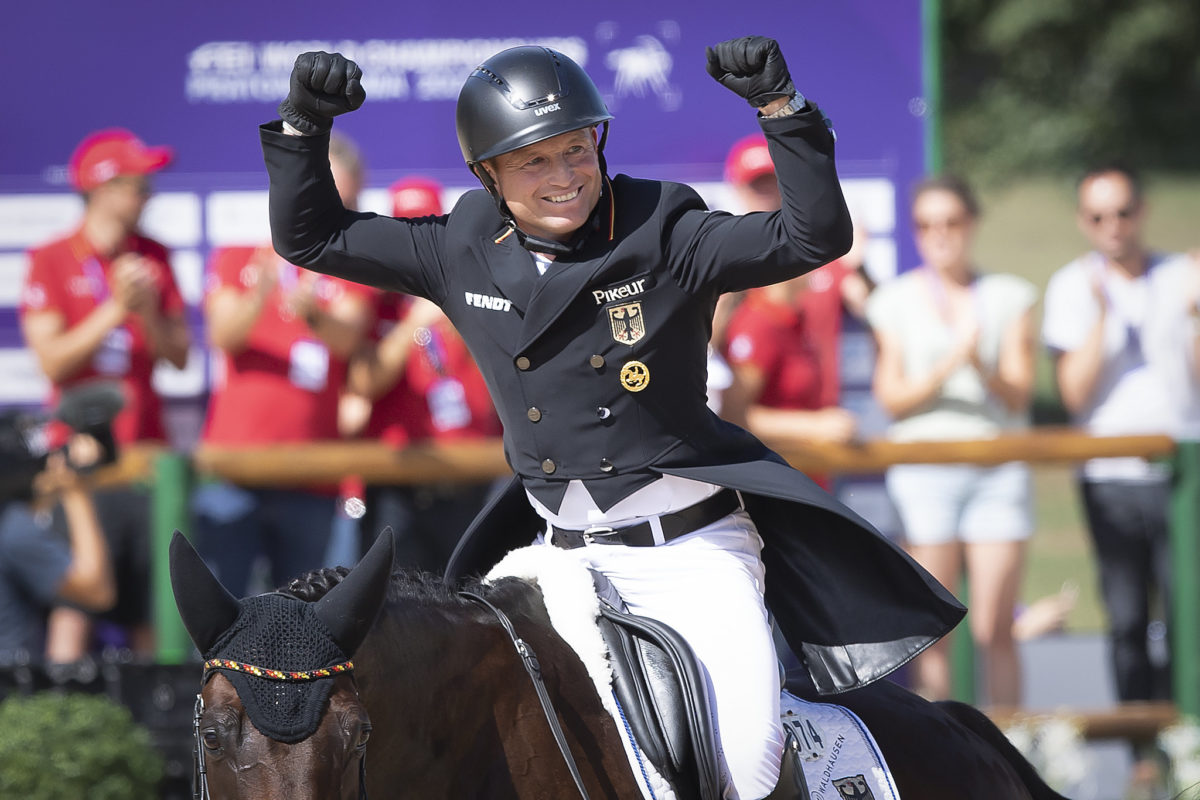 That phrase might make your eyelid twitch whenever it hits your ear, but rest assured, what they all have in common is they surely never followed the FEI Eventing World Championships.

While it’s true the drama-fueled action is typically a feature of cross country day, excitement isn’t exclusive to negotiating obstacles on the green. On Friday, the dressage ring at Pratoni del Vivaro (ITA) served as a testament to never doubt the power of a dancing horse. Especially when Michael Jung (GER) is in the saddle.

On Thursday, it looked like world number 10 Laura Collett (GBR) and London 52’s wildly impressive score of 19.3 was secure enough to maintain the lead even after dressage day two. But Jung, Olympic gold medalist and current world number 9, would have the last word on Friday with Fischerchipmunk FRH. With the 14-year-old gelding, Jung recorded the best dressage score of his CCI-5* career, an 18.8.

“He is so relaxed but powerful and concentrated, so you can show all of what you train, and that’s an amazing feeling for the rider.”

Relaxed and powerful might seem like antonyms, but Jung’s ability to harmoniously join the two elements is what continuously wins him fans within the judges boxes.

Collett is a worthy adversary, though. She attained particular distinction after her record setting win with London 52 at the Badminton Horse Trials on a 21.4 total score. Currently she holds two of the top four 5* finishing total scores ever recorded from her outings at Pau (21.2) in 2020 and Badminton (21.4) in 2022.

She’s second only to Jung, who scored 20.1 in Kentucky in 2022. After Friday’s test its clear he’s determined to hold onto that leading spot, and what better partner to defend it with than Fischerchipmunk.

“It’s amazing how he performs in the arena. He just brings everything in there and you can ride like at home so this is a great feeling,” said Jung.

It helps that Jung has some experience riding under pressure. Jung already has an Individual World title under his belt. He is also a three times individual European champion and twice Olympic Individual champion. When Jung won the Land Rover Kentucky Three-Day Event for a fourth time and achieved his record setting score, it was with Fischerchipmunk who was making his 5* debut.

As for the team, Great Britain is still ahead by a considerable margin.

The Brits have been busy breaking records, too. They head into cross country day with a score 69.2, a new World Championship record. The team comprised of Collett, Oliver Townend with Ballaghmor Class, Rosalind Canter with Lordships Graffalo, and Tom McEwen with Toledo de Kerser won’t be resting on their laurels.

“There are plenty of errors to be made if you’re not ‘on it.’ You’ve got to go out with your plan and stick to it. The thinking rider will come out on top tomorrow,” said McEwen.