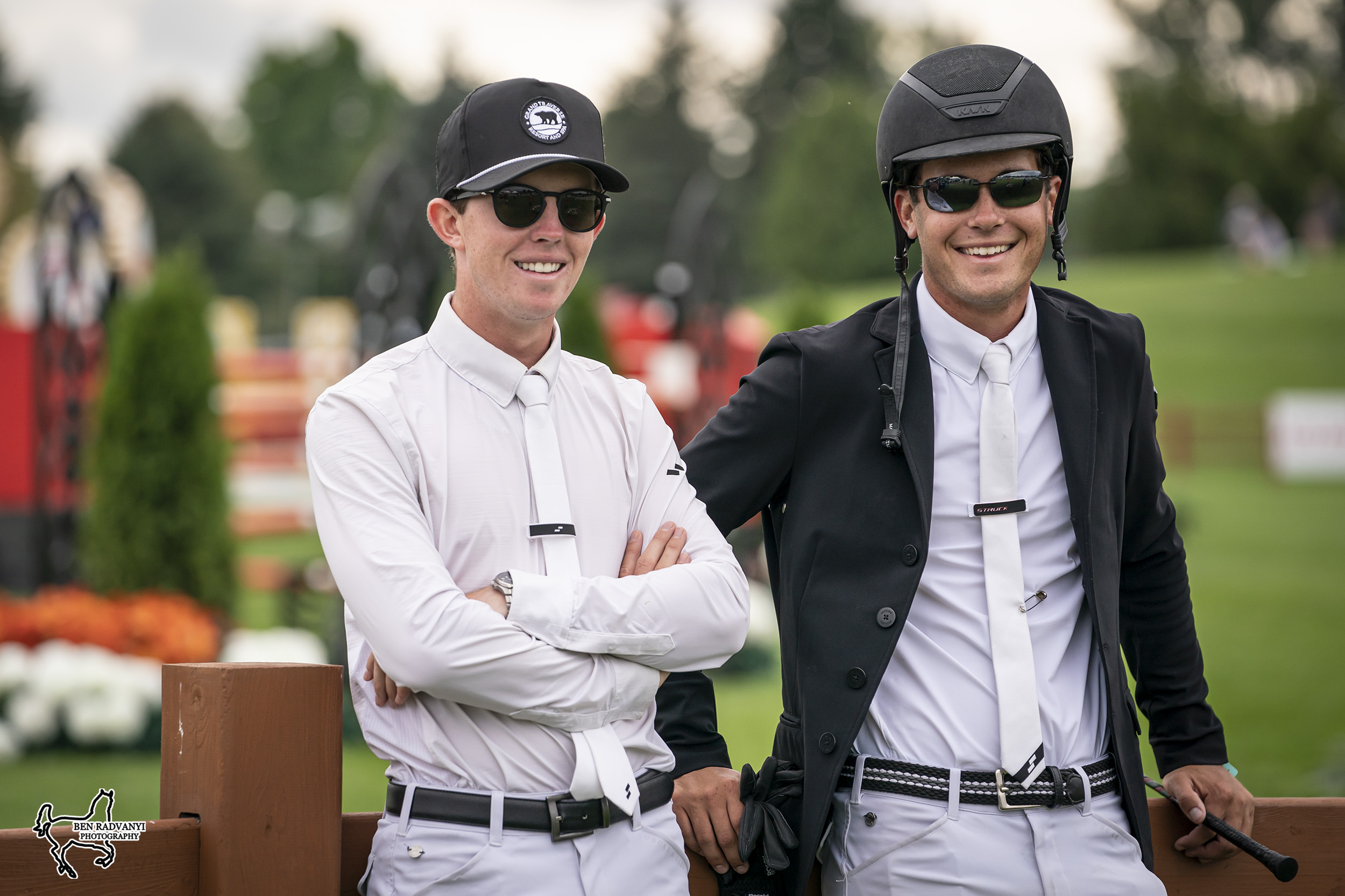 Some epic friendships start in the sandbox.

Others on the golf course, over play dates, or in college philosophy classes.

When Canada’s Sam Walker and America’s Tanner Korotkin crossed paths more than five years ago, however, it was a lot simpler than that.

“We just kind of were like, ‘Hey, you’re a dude that rides, we’re going to be friends now,’” jokes Walker, 20, a member of the ShowPlus Northern Lights.

Turns out, despite hailing from across a border, the two junior competitors already had plenty in common. Beginning, appropriately enough, with a horse they both knew.

“We were both riding this grey equitation [horse] named Willem—[Sam] actually ended up winning some Canadian equitation final on it,” Korotkin, the Spy Coast Spies rookie, recalls. “He messaged me on Instagram, and then we were at [the Winter Equestrian Festival in Wellington, Florida] together, and started hanging out.”

The duo went on to train at North Run under Missy Clark and John Brennan at the same time, and it was there that their bromance really took off.

“At that point in my riding, I always had a love of horses,” Korotkin says, “but I didn’t have as many guy friends in the sport, necessarily, in America. [At North Run, we] became good buddies; it just made it a lot more fun and enjoyable.”

Though the famously competitive atmosphere in the North Run ‘Big Eq’ division helped to hone the teens’ ambitions, both riders agree the program also fostered a friendly rivalry that they both benefit from today.

“[That’s] the whole fun of it,” Korotkin says. “[Even though] we’re competitive against each other, we’re still great buddies at the end of the day.”

At 15, with the support of Clark and Brennan, the two juniors made their first trip to Europe to train and compete on the summer circuits in Belgium and France riding borrowed horses. Sure enough, living in a different country, competing on unique show circuit, with horses they didn’t know well came with its own challenges—and led to some mixed results for the duo.

“The first couple of shows, we were both pretty bad,” Walker recalls.

“We didn’t exactly jump clear at the start, but [we pushed each other], and actually, by the end [of our time there] I won my first FEI class, the Longines Coca-Cola Prix in Deauville, [France], which was very cool at a young age. Tanner did really well also.”

“The only thing I struggled with there was the food,” jokes Tanner, a self-admitted picky eater. “I think I ate ham and cheese every day [we were there]. But other than that, we were at Dinard and Deauville, and those were some of the most incredible shows I’ve ever seen. Honestly, just getting to [compete] in that atmosphere [was amazing].”

Both riders have a return to the Europe on their immediate bucket lists, but this time, to compete with their own strings of horses. All signs indicate that time might be coming soon. This summer in Traverse City, Michigan, Korotkin earned a win and consistent top placings aboard his 12-year-old Holstein gelding, Quinn 33, and the up-and-coming 10-year-old, Ideal. He’s also looking forward to the return of his top horse and two-time Nations Cup partner, Volo’s Diamond, an 11-year-old OS gelding who’s been sidelined since the winter circuit.

Walker, meanwhile, is still coming down from one of the biggest wins of his career to date: The illustrious Spruce Meadows Sun Life Derby, which he captured in early July on the 13-year-old KWPN mare, Evita. Perhaps appropriately, no one was more excited for Walker than his longtime pal from North Run. “I was insanely happy for him,” Korotkin says. “I think I texted him as soon as it happened [and] I was freaking out for him.

“That’s a dream a lot of us have, to win a class like that. [I think that’s] a good part about our friendship. We’re always driving each other to do better, and to keep on going. That’s something you need in this sport, [where it’s] very easy to get distracted, and think you’re already good where you are.”

Walker agrees. “In Florida, I didn’t show very much, and Tanner was pushing me, pushing me, pushing me. At that moment, he was [having] some of the best results of his life with some great placings in the CSI4* and CSI5* classes, [and jumping the] Saturday Night Lights Grands Prix [at the Winter Equestrian Festival], and in his First Nations Cups. I was always [there] cheering him on. But [even then] he said, ‘No, trust me, you’re going to come back, and you’re going to be a lot stronger than you’ve ever been.’

“We’re constantly texting [each other] or on the phone, just saying things, like, ‘Hey, listen, I know maybe it’s not the result you wanted today, but six months from now, maybe you win the biggest class you’ve ever ridden,” Walker continues. “We both want each other to do the absolute best that we can.”

That goes for helping one another find the humor in the sport’s occasionally embarrassing moments as well. For Walker, that moment was a yard sale-worthy crash through a combination while competing in the Medium Junior jumpers at the Hampton Classic Horse Show in 2018 while (naturally) trying to catch his friend Korotkin’s speedy jump-off time. For Korotkin, it was a more subtle oversight with big ramifications during Medal Finals that same year.

“Keep in mind, we’ve already done Medal Finals once before,” a gleeful Walker relates. “And at Medal Finals, there’s a dotted line with hedges on it that you can’t cross when you come out of the ring. You have to exit out of the ‘Exit’ sign. So, you go in the entrance, and all you have to do after the last fence is to do a circle, and then [leave through] the other door.

“I remember, we had talked about it, and Tanner said, ‘Oh, man, can you imagine if somebody tried to come out the entrance!?’ [Unfortunately, when his turn came], Tanner did indeed trot back through the entrance after having a pretty incredible trip at Medal Finals,” Walker says, laughing.

Unfortunately, the error resulted in an ‘off-course’ disqualification for Korotkin, despite a stellar jumping performance. Like any supportive barn-mate, Walker says he gave his pal the space and time he needed to process—even if, today, both friends can barely keep a straight face while talking about it.

“I just kept my head down,” Walker says. “I know that he was he was kicking himself about that one for a while.”

Though they are equally competitive in the grand prix ring, Korotkin and Walker are as different as, say, Maverick and Goose when it comes to how they handle the pressure of a big class. Perhaps unsurprisingly, their contrasts are what they most respect in each other’s game.

“What I admire about Sam is that he’s always been very, very focused,” Korotkin says. “Every time he goes in the ring, he knows exactly what he wants to do, and follows the plan. He always does his best to get it done, and usually, he does. I’ve always been a bit more laid back about certain things, which was a fault that I worked on. Because in this sport, you need to be on it every step of the way.”

“I’d definitely say Tanner’s strength is keeping his head cool,” Walker retorts. “I’ve always been envious of how he can just keep his head on his shoulders; you never see Tanner nervous. He could be walking [the course] at his first [Olympic Games], and he’d just be the same Tanner you saw the night before, sitting at the table, watching the [Grand Prix]…”

“I mean, I’m sure during my first time going to the Olympic Games I might be a little tense!” says Korotkin. “I don’t know if I’m just a little dumb, [but] I try to be very relaxed and cool about as many things as possible.”

Though Walker admits he’s not immune to feeling excitement before a big class—and especially when he goes later in the order—he’s found that a combination of repetition and preparation are key when it comes to achieving a desired result.

“It could be the CSI5* Grand Prix last week, or a National-level grand prix, I’m going to treat it the same,” Walker explains. “At the end of the day, if you practice something over and over again, you’re going to get really good at whatever it is you’re practicing. [Also, keeping] good habits; eating well, making sure you have enough energy, getting to sleep early the night before [a class]. Those are the biggest things for me.”

Both Walker and Korotkin have high hopes for their future in the sport, with Nations Cup teams, climbing the World Rankings, and even Olympic appearances well within their sights. Korotkin’s only regret? That he’ll have to ride against his longtime pal when it comes major championships.

“I wish [Sam] was American so we could be on the team together,” he laughs. “I think maybe [the U.S.] should try to recruit him!”

And though it’s not lost on Walker that he may, in fact, be forced into a high-stakes, head-to-head with Korotkin one day—or even this weekend, at MLSJ Ottawa— the Canadian rider isn’t worried about the long-term impact on their bond.

“[The other day, Tanner] said, ‘You know, do you remember [all those years] ago, when we were [imagining] one day, when we’re both jogging CSI5* classes together, and doing business [as profession riders]? That time is kind of here—it’s upon us now. And, you know, we’ll be friends for the rest of our lives.”