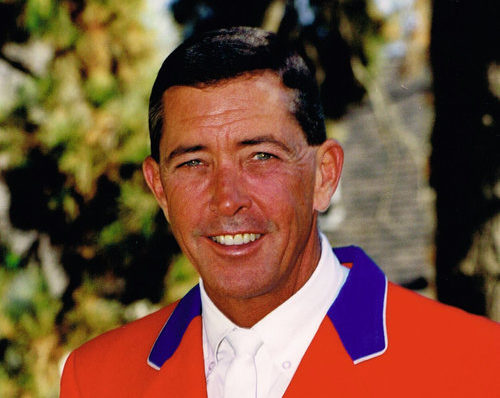 Each week on #HallOfFameThursday, Horse Network recognizes members of the Show Jumping Hall of Fame, and on the first Thursday of every month, an historic article. This week we feature 2011 inductee Hap Hansen.

With 100 Grand Prix wins to his credit, Hap Hansen stands among the elite riders in the history of his sport.

In addition to his long list of Grand Prix victories that place him among the top winners of all time, Hansen is also a veteran of twelve FEI World Cup Finals and two dozen Nations’ Cups. He won the FEI World Cup USA West Coast League seven times and earned a dozen leading rider titles at top shows from Spruce Meadows to Harrisburg.

Hansen placed in the top ten at the FEI World Cup Final twice. He was the top placing U.S. rider at the 1988 Final in Gothenburg, Sweden, when he finished sixth, the same position in which he had finished in the 1986 Final in Berlin.

He was honored as the American Grandprix Association (AGA) Rider of the year in 1990 and he won the 1982 Rolex Crown of Excellence. His victories span three decades and nearly every continent, making him one of America’s most accomplished show jumping riders.

In addition to being a dominant force on the West Coast Grand Prix circuit, Hansen has represented the U.S. internationally many times including at shows such as Hickstead, Arnhem, Aachen and Spruce Meadows.

Hansen’s success in the show jumping arena also extends beyond his personal wins. He was served as chef d’equipe for over 10 Gold Medal teams at the North American Young Riders Championships and Harrisburg Prix de States.

Twice, in 1991 and 1998, Hansen placed second in the USET National Show Jumping Championships.