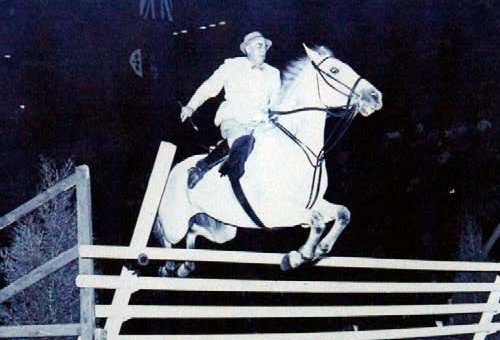 Johnny Bell was one of the most colorful and popular open jumper riders in the 1950s and ‘60s.

He was perhaps best known for his partnership with the big grey jumper McLain Street, named after the street in Mt. Kisco, NY, where Johnny lived. The horse was owned by BBD&O chairman Ben Duffy who had also managed the Eisenhower presidential campaign.

The son of a horse trader in Westchester County, NY, Johnny came by his success the old fashioned way—he earned it by working many long hours.

Johnny was over 40 years old when he started showing McLain Street. Though one of the older riders on the circuit, he was also one of the most successful, winning consistently with McLain Street at most of the major shows including The National Horse Show. In 1961 alone, he won no fewer than seventeen Jumper Championships. McLain Street was named the American Horse Shows Association Horse of the Year for three straight years, and he won the Professional Horseman’s Association championship in 1960 and 1961. In 1964, Johnny was recognized as AHSA Horseman of the Year.

Johnny had an unusual and memorable style of riding, somewhat resembling the style seen in old English hunting prints.

Johnny’s willingness to help people out was a characteristic that made him extremely popular with his contemporaries, and many of the top jumper riders of that time credited their success to his advice and assistance.