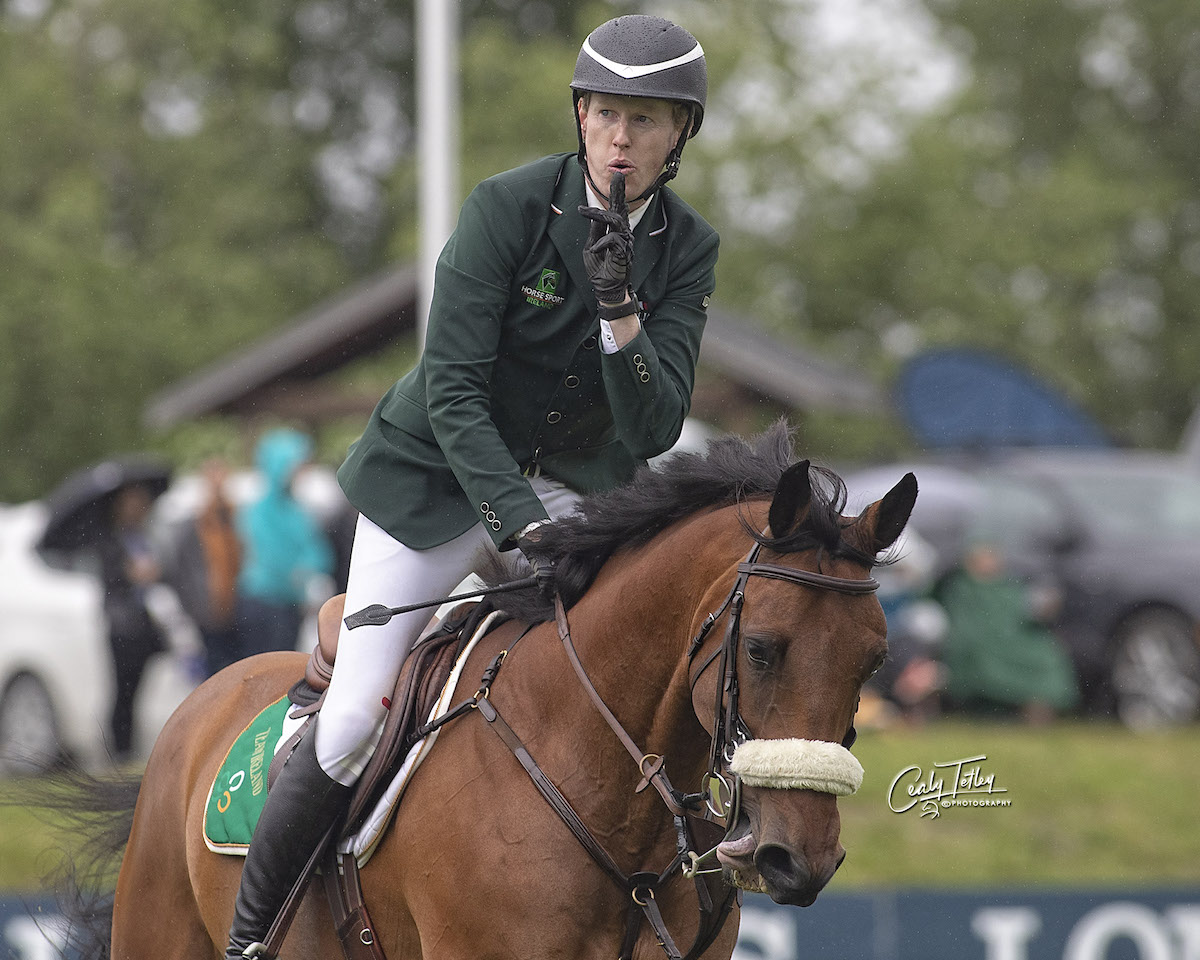 Irish riders have made it a game to knock each other down steps of the podium. They’re fiercely competitive, especially amongst each other. Yet underneath all the spiteful jump-off turns and comedic barbs is a familial type of camaraderie. So when they come together, they’re a force to be reckoned with.

Sunday, a quartet of Irishmen jumping on a grass field in inclement weather proved to be a lethal mix in the CSIO5* Longines FEI Jumping Nations Cup of Canada™ at Thunderbird Show Park (tbird) in Langley, BC.

The final leg of the North and Central America and Caribbean division of the Nations Cup series saw six teams contest the Peter Holmes designed track. Shane Sweetnam, Andrew Bourns, Conor Swail and Coyle leaned into the Vancouver elements to finish on five points. Mexico took silver with a 13-point score, and the Australian “underdogs” secured bronze on 22-points.

The expectations for Michael Blake, Ireland’s Chef d’Equipe, were high to start. Blake named his string of riders in February, fielding some of the most competitive combinations of the six teams and focusing their efforts on the Canadian leg.

“We had such strong horses and riders. Daniel’s horse [Legacy] jumped the European Championships last year and was magnificent. Shane’s horse [James Kann Cruz] is only a young horse but it looks like it’s going to be one of the best horses in the world. Andrew’s horse [Sea Topblue] was double clear in [the] Wellington [Nations Cup] already [this year], and my horse [Count Me In] is the number one horse in the world in the moment,” said Swail.

The quality showed. Finishing the first round on four-faults, the Irish team were able to maintain their lead in the second round when Coyle and Bourns jumped clear. Sweetnam sealed the win with a conservative ride on nine-year-old James Kann Cruz, collecting just one time fault. Anchor rider Conor Swail and Count Me In were able to sit the second round out, as the team already had the score they needed.

The podium is a frequently visited locale for the Irish, but the win was all the more special for one rider, his father, and their family horse.

“I’m very proud of what he’s achieved,” said Richard Bourns of his son Andrew and their 11-year-old gelding Sea TopBlue. “He works really hard, and he’s developed this horse into the horse he is today.”

The pair were one of only two combinations to walk out of the Fort Grand Prix arena on a double clear score. The Bourns always had a sense that Sea Topblue was destined for success, though.

Discovered at an auction in Cavan, Ireland, Sea Topblue was the only foal amongst hundreds that caught the eye of Richard and his late wife Deirdre. They brought him home to Lisbeg Farm in Galway, Ireland where he lived in a field with sheep, cattle and a herd of young horses. At four, Sea TopBlue was already demonstrating excellent technique and remarkable scope, winning a qualification at his first outing, which swiftly drew the attention of buyers.

“The video was posted on Facebook. I had calls from all over the world about the horse immediately. I realized, being a seller of horses, I was going to have a problem,” said Richard.

“I actually went to my wife Deirdre, and I said ‘I’m going to sell this horse to you for whatever is in your pocket right now. And then when my good clients ring me asking about the horse, I can say, ‘I’m sorry, he’s not mine!'”

“He’s been a part of the family ever since,” said Andrew.

And Sea Topblue is only getting started. In January, Andrew and the striking bay gelding won a CSI4* Grand Prix at the fiercely competitive Winter Equestrian Festival (WEF). They went on to win the CSIO4* 1.50m with the Irish team at WEF in March. On Sunday at tbird, they jumped double clear in their first 5* Nations Cup together.

“It was a great advice from Deirdre. She said, ‘hold on to that one!'” recalled Richard.

For the Bourns, raising Sea Topblue from a foal has made all the difference in building a connection and establishing his confidence.

“He’s only ever known for us to really love him and think the world of him. He knows nothing else. He thinks he’s the greatest horse that’s ever graced God’s earth. And we want him to continue thinking that,” said Andrew.