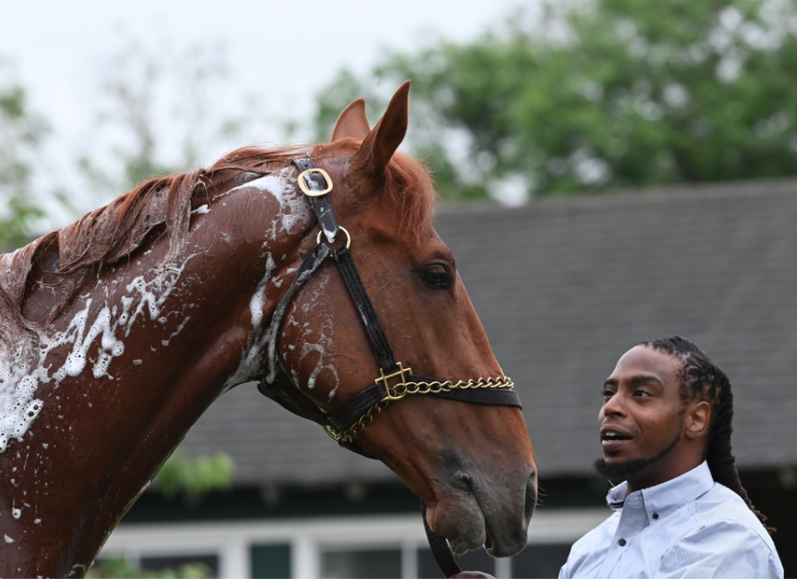 Think of the places most connected with Thoroughbred racing in America.

There is of course Kentucky, the unofficial birthplace of the sport in the U.S. In the East, there’s New York which hosts the Belmont Stakes (G1), the third leg of the American Triple Crown, later today. California is the best in the west. And then, there is Ohio.

The Buckeye State has more in common with the Bluegrass State than most racing fans might think. The only thing that separates the two is the Ohio River. The northern bank of that river is the southern
boundary of Ohio because the U.S. Supreme Court once gave Kentucky legal ownership of the entire river. Don’t ask.

It’s more likely racing fans have become more familiar with Ohio recently because of an historic accomplishment by one of its horses and one of its native sons—Rich Strike, the 80-1 second longest shot winner of the May 6 Kentucky Derby (G1) and an entrant in the Belmont—and his longtime groom, Jerry Dixon Jr.

The groom grooms the horse…and a whole lot more. A groom is responsible for the daily care of their horse. In addition to washing and grooming, there is cleaning and maintaining the stall, feeding and watering, being alert for signs of discomfort or illness, developing a rapport that both encourages and calms their horse. It’s not unusual for some grooms to nap or even sleep overnight with their horse.

In short, grooms spend more time with their horse than anyone. And they do it all for relatively meager pay. Though it varies by state, the nationwide average pay for a groom is just over $39,000 a year.

Dixon’s day begins at 4:30 am. He is a fourth-generation horseman who learned the trade from his namesake father. He’s been around horses since he was a child but didn’t take to them at first.

Virtually unknown like the horse Dixon “loves more than anything in the world,” the video of Dixon sitting beside and talking to a supine Rich Strike in his Belmont stall to wake him has gone viral.

“He lets me do whatever it is I need to do so he’s taken care of,” explains Dixon. “Trust is the big thing.”

A seemingly overnight celebrity, the younger Dixon has been at his craft for 13 years. He started working for Tommy Short at lesser-known tracks in Ohio and Indiana. He began working for Rich Strike trainer Eric Reed two years ago.

Though he came to Reed’s Mercury Equine barn with more than a decade of experience, Dixon says he’s learned so much more from the trainer who has been in the business for nearly four decades.

“The key thing I learned from Eric has been to always pay attention to detail,” explains Dixon.

“Richie loves Jerry and Jerry loves Richie,” observes Reed. “We’re all family here. But there’s a bond between Jerry and Richie that is serious. The horse is calmer when Jerry is around, and he’s changed all our lives forever.”

For everyone involved with Rich Strike, even getting a gate in the Kentucky Derby when Ethereal Road was scratched at the very last possible moment was the thrill of a lifetime.

“We were at the barn celebrating,” recalls the elder Dixon. “I watched my son walk off by himself. He got down on his knees and he thanked God.”

…but to actually win the Run for the Roses? Indescribable.

“I didn’t think it was real at first. It felt like a dream.” Dixon, Jr. recalled. “I had to ask Sonny [Leon, Rich Strike’s jockey]. Did we really just win the Kentucky Derby?’ Sonny said, ‘I show you.’ He threw a rose, it hit my arm, and that’s when I knew.”

Except for their newfound celebrity status, things haven’t changed much for Team Rich Strike in preparation for this evening’s Belmont Stakes, the so-called “Test of Champions.”

Rich Strike drew post 4 in the eight-horse field, a far cry from post 20 in the 20-horse, calvary-charge field that is the Derby. He’ll need the advantage. The dirt track called “Big Sandy” is deep with wide, sweeping turns and a famously long final stretch run that has foiled many a Belmont Stakes hopeful.

And he won’t have the element of surprise in his favor this time.

So, bettors aren’t expecting a repeat of Rich Strike’s stunning Derby upset. The Keen Ice colt is the 7-2 third choice in an eight-horse field. Peter Pan Stakes winner We The People is the 2-1 favorite, followed by Mo Donegal at 5-2. But as everyone learned from the Kentucky Derby, there is a reason they run the race.

Rich Strike arrived at Belmont Wednesday. He’s been paddock schooled since his arrival and took a final mile-and-a-half turn, the Belmont Stakes distance, around the main track Thursday.

Dixon got to travel with Richie to Belmont, a first-time, simple lifelong dream that confirms for Dixon “hard work pays off.”