Rich Strike Returns Racing To Its Fairy Tale Past 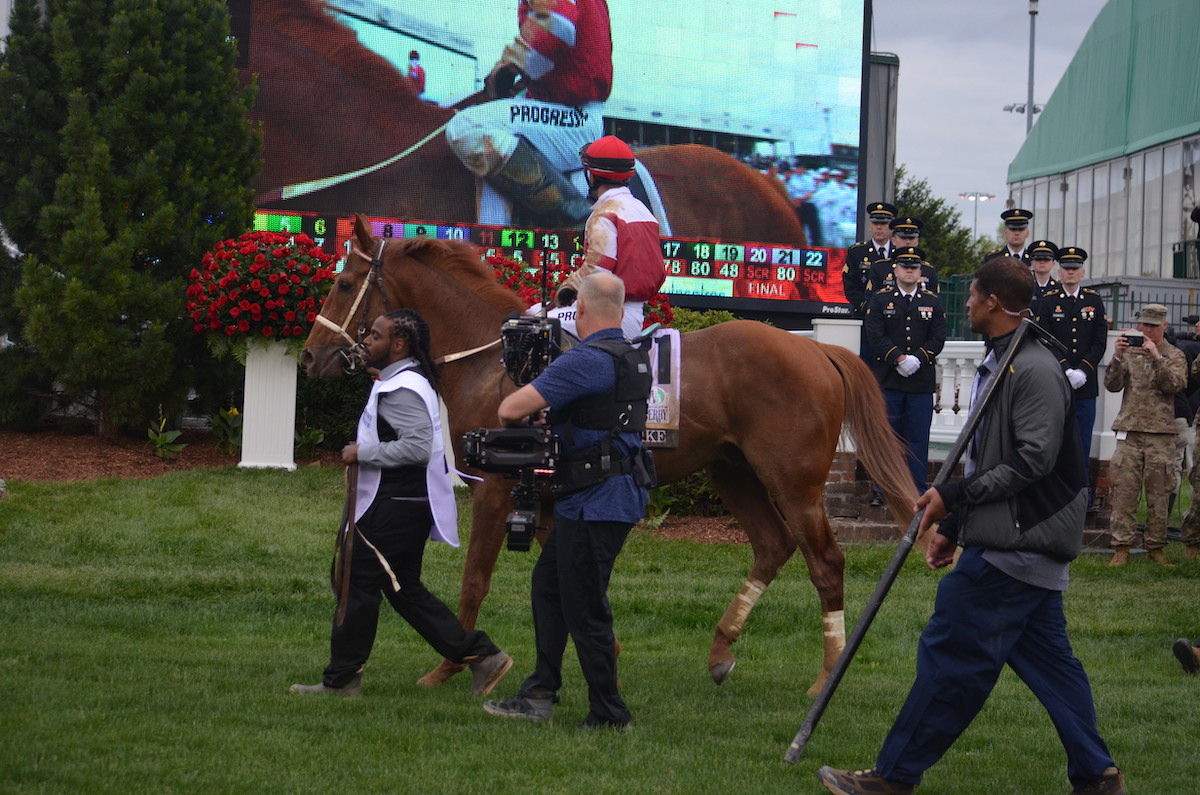 Fair-y tale (noun): a children’s story that is magical, idealized or extremely happy.

Horseracing’s past has been replete with fairy tale endings.

There was that day in 1938 when a nation stopped to listen as Seabiscuit, a small, ordinary horse beat a son of Man O’ War, Triple Crown-winner War Admiral, in a match race at Pimlico that gave hope to struggling ordinary Americans in the midst of The Great Depression.

On June 9, 1973, Secretariat added to his already considerable legend, “moving like a tremendous machine” to win the 1973 Belmont Stakes by 31 lengths in record time.

Mine That Bird, a $9,500 horse that had raced only in Canada and the Southwest and was taken from New Mexico to Churchill Downs by his owner in a rented van, stunned the racing world by skimming the rail for a 50-1 last-to-first-place victory in the 2009 Kentucky Derby.

In the Stephen Sondheim play “Into the Woods” popular children’s fairy tales—Cinderella, Rapunzel, Jack and the Beanstalk—all are given an alternate ending, a tragic twist.

In recent years, the same has been happening with horseracing. Inexplicable Thoroughbred deaths at one of the sport’s most prominent racetracks and substance abuse scandals involving some of racing’s most high-profile people have marred racing’s fairy tale past.

But the recent triumph-to-tragedy twists in the sport were given a stunning reversal Saturday at Churchill Downs when a disrespected horse, a first-time owner, a small-barn trainer and a little-known jockey—together with an incredible amount of racing luck—all combined to script the latest in the sport’s near-forgotten book of fairy tale endings.

Rich Strike was a one-time $30,000 claimer that once had three Derby also-eligibles in front of him. He earned a gate only when Ethereal Road was scratched by training legend D. Wayne Lukas five minutes before the Kentucky Derby 148 field was closed Friday morning.

The son of Keen Ice (out of Gold Strike by Smart Strike) wore number 21 and left from the farthest outside post 20. Under a masterful ride by obscure jockey Sonny Leon, Rich Strike turned on the afterburners along the Churchill Downs rail to score a length victory as favorites Epicenter and Zandon battled near the finish, ignoring the horse streaking past along the rail.

Rich Strike’s 80-1 winning odds were the second longest in Derby history, surpassed only by Derby winner Donerail’s 91-1 in 1913.

Like scores of trainers in the sometimes-misnamed Sport of Kings, 57-year-old Eric Reed runs a small barn. His father, Herbert, also was a trainer. The younger Reed took out his training license in 1985. His best year was 2010, when his horses won a combined $1.81 million. That sounds like a lot until you realize Rich Strike’s Derby win earned $1.86 million.

Asked in the post-Derby press conference what he would have been doing Saturday if Rich Strike hadn’t gotten in, Reed said: “Fishing with my dad.”

Like trainer Reed, Sonny Leon is a winning but obscure rider who races at smaller tracks. Saturday’s Derby win was his first victory in any graded stakes race. In the eight years he’s ridden, his average earnings for his horses are $2,500. He gets 10 percent of Rich Strike’s Derby winnings, $186,000.

First time in the Kentucky Derby, was he nervous? “I wasn’t nervous, I was excited. Nobody knew my horse like I know my horse.”

He said he had planned to spend Saturday at home with his family if Real Strike didn’t get in. Instead, he spent the day in life-altering fashion.

“Every jockey was Sonny Leon at some point in their career,” said Reed, who admitted he and owner Dawson had spoken about changing jockeys for the Derby. “They just needed the big stable or the good horses to take them to the top.”

Owner Richard Dawson is relatively new to racing, having spent a career in the oil and gas industry. Having had little luck in two years, he was considering getting out of the racing business.

Theirs is a fairy-tale ending, but it was six years in the making.

In 2016, Reed’s barn in Lexington had only 36 horses. But even that small stable was decimated in a barn fire. As reported by WKYT News:

“The owner of the Mercury training center, Eric Reed, says they rescued as many of the horses as the could before flames took over. Reed says there were 36 horses inside the barn at the time, but only a dozen made it out alive.”

Reed conceded it was difficult to remain in racing after the incident but added that training racehorses is the only thing he ever wanted to do since graduating from high school.

“I’m elated. I’m happy because this horse trained good enough to win, this rider [Leon] has ridden him all along and taught him to run through horses, and he [his father] taught me how to do what I’m doing. I’m surrounded by the best.

“I didn’t think we’d win necessarily, but I knew if we got in, they’d know who he [Rich Strike] was when the race was over.”

Two days later, Saturday still seems to dwell in the land of fantasy to Reed: “It’s hard for me to imagine that a Kentucky Derby winner is standing in my barn right now.”

Hard for the handicappers, the bluebloods and the cynics to believe as well…

…unless there’s that bit of a child still left in you who believes fairy tales can come true.